Jupyter (formerly IPython Notebook) is an open-source project that lets you easily combine Markdown text and executable Python source code on one canvas called a notebook. Visual Studio Code supports working with Jupyter Notebooks natively, as well as through Python code files. This topic covers the support offered through Python code files and demonstrates how to:

To work with Jupyter notebooks, you must activate an Anaconda environment in VS Code, or another Python environment in which you've installed the Jupyter package. To select an environment, use the Python: Select Interpreter command from the Command Palette (⇧⌘P (Windows, Linux Ctrl+Shift+P)).

Once the appropriate environment is activated, you can create and run Jupyter-like code cells, connect to a remote Jupyter server for running code cells, and export Python files as Jupyter notebooks.

Note: Make sure to save the code shown above in a file with a .py extension.

When the Python extension detects a code cell, it adds Run Cell and Debug Cell CodeLens adornments. The first cell also includes Run Below and all subsequent cells include Run Above: 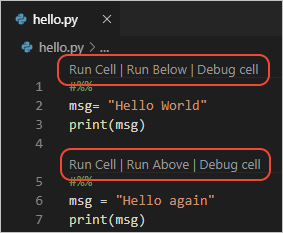 Run Cell applies to only the one code cell. Run Below, which appears on the first cell, runs all the code in the file. Run Above applies to all the code cells up to, but not including, the cell with the adornment. You would use Run Above, for example, to initialize the state of the runtime environment before running that specific cell.

Selecting a command starts Jupyter (if necessary, which might take a minute), then runs the appropriate cell(s) in the Python Interactive window: 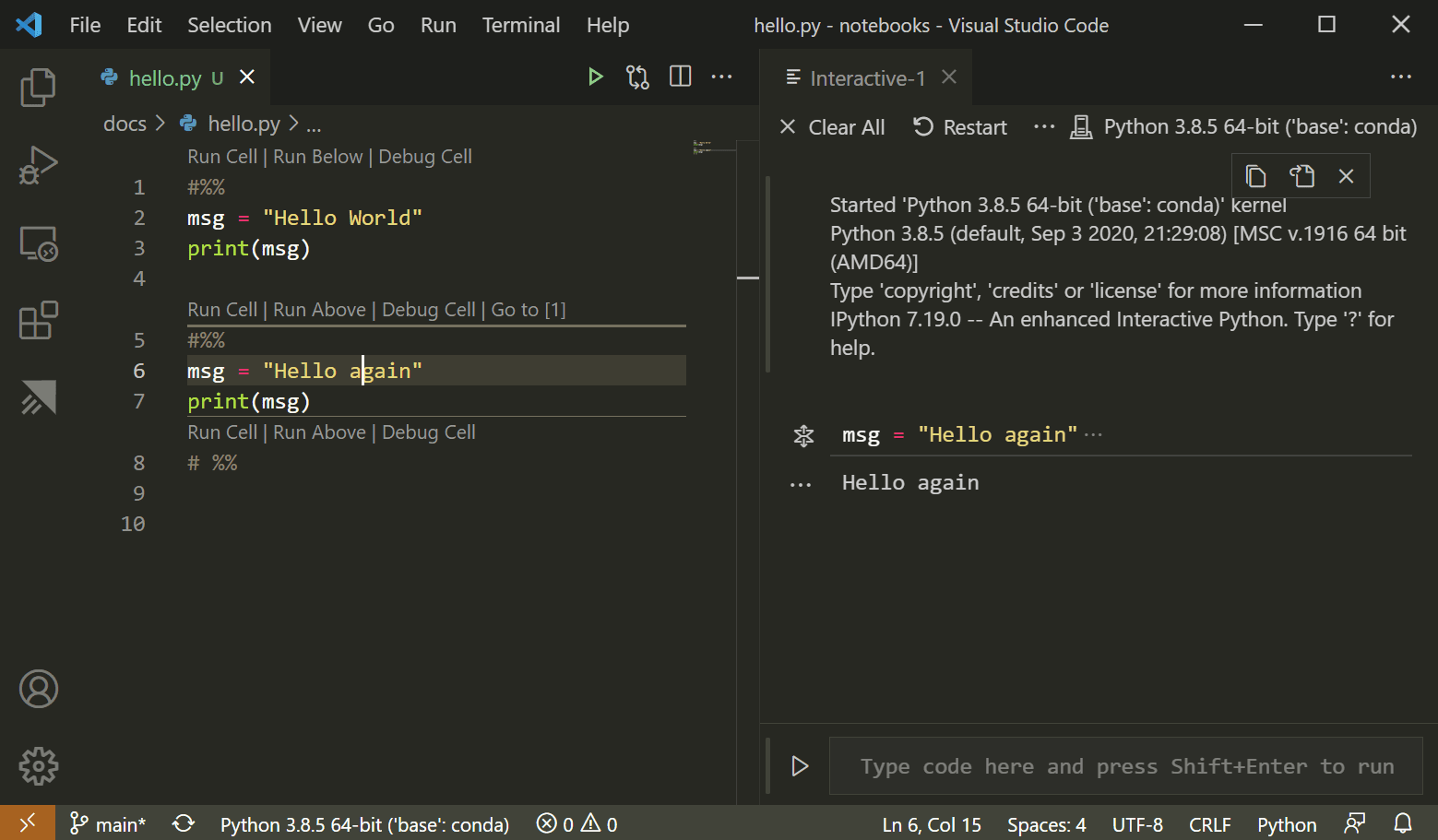 You can also run code cells using (Ctrl+Enter) or the Python: Run Selection/Line in Python Terminal command (Shift+Enter). After using this command, the Python extension automatically moves the cursor to the next cell. If you're in the last cell in the file, the extension automatically inserts another # %% delimiter for a new cell, mimicking the behavior of a Jupyter notebook.

You can also click in the margin to the left of line numbers to set breakpoints. Then you can use Debug Cell to start a debugging session for that code cell. The debugger stops execution at breakpoints and allows you to step through code one line at a time and inspect variables (see Debugging for details).

The Python Interactive window, mentioned in the previous section, can be used as a standalone console with arbitrary code (with or without code cells). To use the window as a console, open it with the Jupyter: Create Interactive Window command from the Command Palette. You can then type in code, using Enter to go to a new line and Shift+Enter to run the code.

To use the window with a file, use the Jupyter: Run Current File in Python Interactive Window command from the Command Palette.

The Plot Viewer gives you the ability to work more deeply with your plots. In the viewer you can pan, zoom, and navigate plots in the current session. You can also export plots to PDF, SVG, and PNG formats.

Within the Python Interactive window, double-click any plot to open it in the viewer, or select the expand button on the upper left corner of the plot.

Within the Python Interactive window, it's possible to view, inspect, and filter the variables within your current Jupyter session. Select the Variables button in the interactive window toolbar to open the Variables explorer after running code and cells, you'll see a list of the current variables, which will automatically update as variables are used in code. 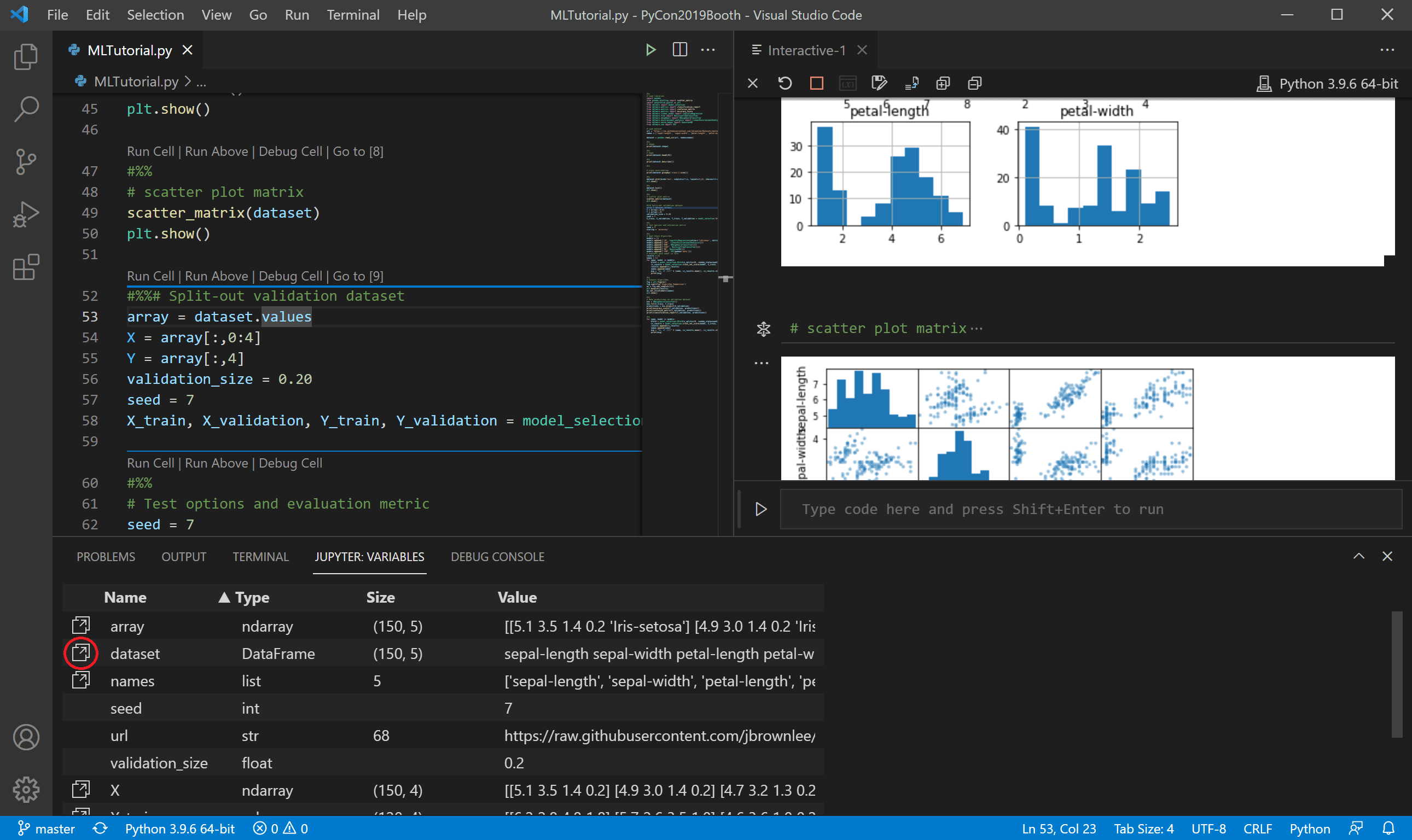 For additional information about your variables, you can also double-click on a row or use the Show variable in data viewer button to see a more detailed view of a variable in the Data Viewer. Once open, you can filter the values by searching over the rows.

Connect to a remote Jupyter server

You can offload intensive computation in a Jupyter notebook to other computers by connecting to a remote Jupyter server. Once connected, code cells run on the remote server rather than the local computer.

To connect to a remote Jupyter server:

Note: For added security, Microsoft recommends configuring your Jupyter server with security precautions such as SSL and token support. This helps ensure that requests sent to the Jupyter server are authenticated and connections to the remote server are encrypted. For guidance about securing a notebook server, see the Jupyter docs.

When you've activated an environment with Jupyter installed, you can open a Jupyter notebook file (.ipynb) in VS Code and then convert it to Python code. Once you've converted the file, you can run the code as you would with any other Python file and also use the VS Code debugger. Opening and debugging notebooks in VS Code is a convenient way to find and resolve code bugs, which is difficult to do directly in a Jupyter notebook.

When you open a notebook file, Visual Studio Code will open it in the Notebook Editor automatically. Use the convert icon on the toolbar to convert the Notebook (.ipynb) file to a Python file (.py).

Select the convert icon followed by "Python Script", wait a few seconds, and then VS Code opens the converted notebook in an untitled file. The notebook's cells are delimited in the Python file with # %% comments; Markdown cells are converted wholly to comments preceded with # %% [markdown], and render as HTML in the interactive window alongside code and output such as graphs: 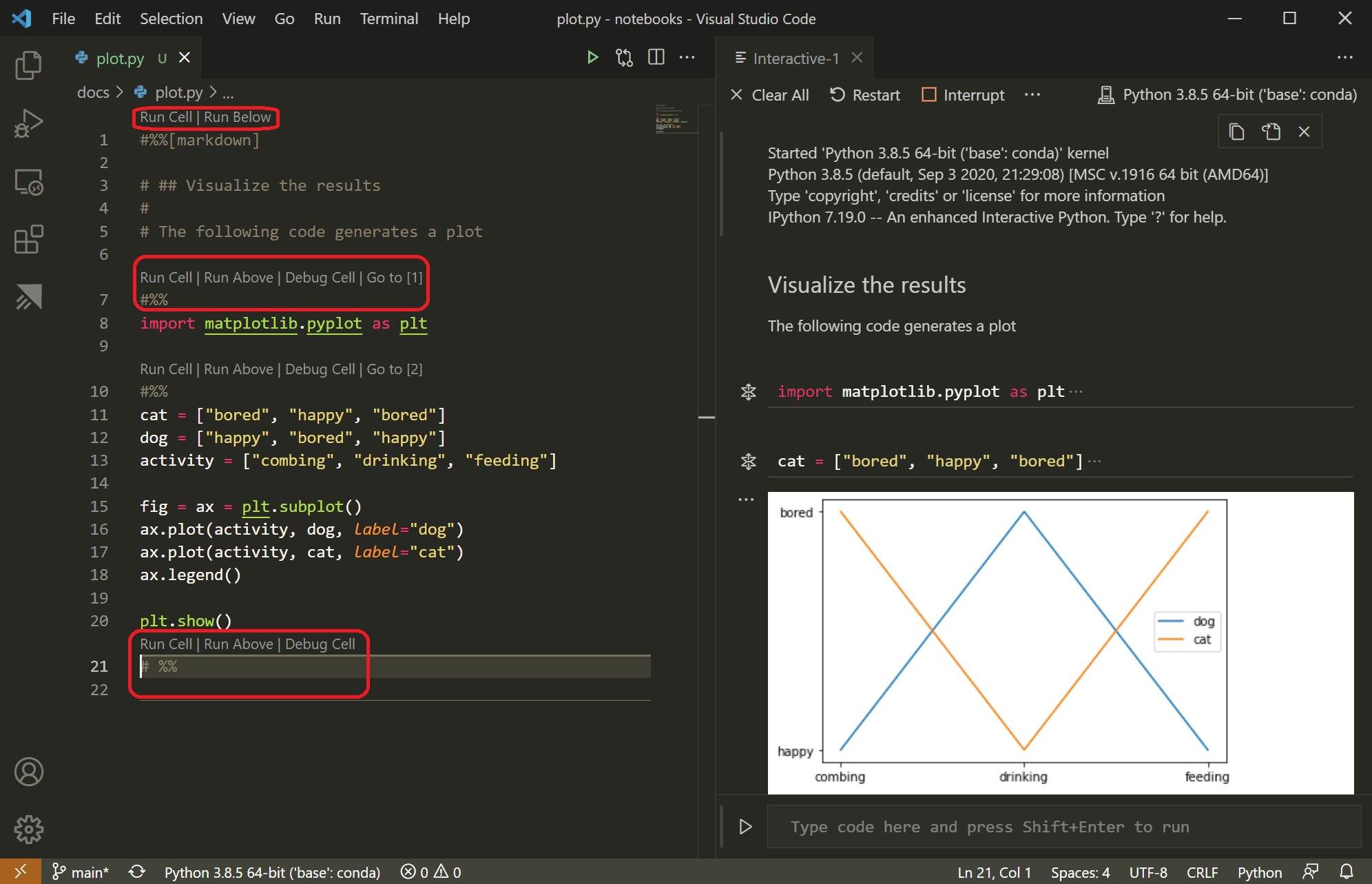 Note: The first time you run code cells in a Python file, the Python extension starts a Jupyter server. It may take some time for the server to start up and for the Python Interactive window to appear with the results of the code.

The Visual Studio Code debugger lets you step through your code, set breakpoints, examine state, and analyze problems. Using the debugger is a helpful way to find and correct issues in notebook code.

In addition to opening a Jupyter notebook, you can also use one of the following commands from the Command Palette (⇧⌘P (Windows, Linux Ctrl+Shift+P)) to export content from a Python file in VS Code to a Jupyter notebook (with the .ipynb extension).

After exporting the contents, VS Code displays a prompt through which you can open the notebook in a browser.