A little background on unit testing

(If you're already familiar with unit testing, you can skip to the walkthroughs.)

A unit is a specific piece of code to be tested, such as a function or a class. Unit tests are then other pieces of code that specifically exercise the code unit with a full range of different inputs, including boundary and edge cases.

For example, say you have a function to validate the format of an account number that a user enters in a web form:

Unit tests are concerned only with the unit's interface—its arguments and return values—not with its implementation (which is why no code is shown here in the function body; often you'd be using other well-tested libraries to help implement the function). In this example, the function accepts any string and returns true if that string contains a properly formatted account number, false otherwise.

To thoroughly test this function, you want to throw at it every conceivable input: valid strings, mistyped strings (off by one or two characters, or containing invalid characters), strings that are too short or too long, blank strings, null arguments, strings containing control characters (non-text codes), string containing HTML, strings containing injection attacks (such as SQL commands or JavaScript code), and so on. It's especially important to test security cases like injection attacks if the validated string is later used in database queries or displayed in the app's UI.

For each input, you then define the function's expected return value (or values). In this example, again, the function should return true for only properly formatted strings. (Whether the number itself is a real account is a different matter that would be handled elsewhere through a database query.)

The exact structure of the code depends on the test framework you're using, and specific examples are provided later in this article. In any case, as you can see, each test is simple: invoke the function with an argument and assert the expected return value.

The combined results of all the tests is your test report, which tells you whether the function (the unit), is behaving as expected across all test cases. That is, when a unit passes all of its tests, you can be confident that it's functioning properly. (The practice of test-driven development is where you actually write the tests first, then write the code to pass increasingly more tests until all of them pass.)

Because unit tests are small, isolated pieces of code (in unit testing you avoid external dependencies and use mock data or otherwise simulated inputs), they're quick and inexpensive to run. This characteristic means that you can run unit tests early and often. Developers typically run unit tests even before committing code to a repository; gated check-in systems can also run unit tests before merging a commit. Many continuous integration systems also run unit tests after every build. Running the unit test early and often means that you quickly catch regressions, which are unexpected changes in the behavior of code that previously passed all its unit tests. Because the test failure can easily be traced to a particular code change, it's easy to find and remedy the cause of the failure, which is undoubtedly better than discovering a problem much later in the process!

For a general background on unit testing, read Unit testing on Wikipedia. For useful unit test examples, you can review https://github.com/gwtw/py-sorting, a repository with tests for different sorting algorithms.

Python tests are Python classes that reside in separate files from the code being tested. Each test framework specifies the structure and naming of tests and test files. Once you write tests and enable a test framework, VS Code locates those tests and provides you with various commands to run and debug them.

For this section, create a folder and open it in VS Code. Then create a file named inc_dec.py with the following code to be tested:

With this code, you can experience working with tests in VS Code as described in the sections that follow.

Once you have the Python extension installed and a Python file open within the editor, a test beaker icon will be displayed on the VS Code Activity bar. The beaker icon is for the Test Explorer view. When opening the Test Explorer, you will see a Configure Tests button if you don't have a test framework enabled. Once you select Configure Tests, you will be prompted to select a test framework and a folder containing the tests. If you're using unittest, you will also be asked to select the file glob pattern used to identify your test files. 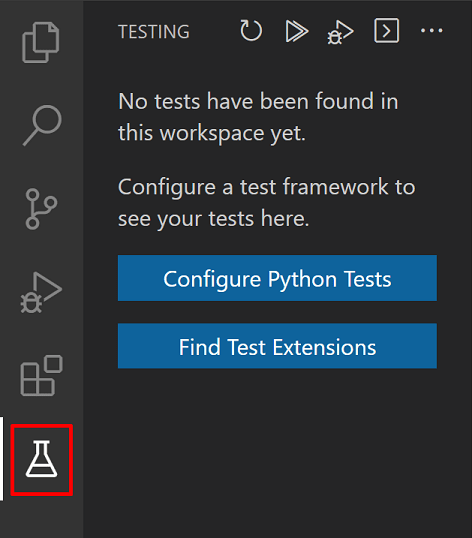 You can configure your tests anytime by using the Python: Configure Tests command from the Command Palette. You can also configure testing manually by setting either python.testing.unittestEnabled or python.testing.pytestEnabled to true. Each framework also has specific configuration settings as described under Test configuration settings for their folders and patterns.

If both frameworks are enabled, then the Python extension will only run pytest.

When you enable a test framework, VS Code prompts you to install the framework package if it's not already present in the currently activated environment:

Each test framework has its own conventions for naming test files and structuring the tests within, as described in the following sections. Each case includes two test methods, one of which is intentionally set to fail for the purposes of demonstration.

By default, the Python extension attempts to discover tests once you enable a framework. You can trigger test discovery at any time using the Test: Refresh Tests command.

python.testing.autoTestDiscoverOnSaveEnabled is set to true by default, meaning that test discovery is also performed automatically whenever you add, delete, or update any Python file in the workspace. To disable this feature, set the value to false. You will need to reload the window for this setting to take effect.

Test discovery applies the discovery patterns for the current framework (which can be customized using the Test configuration settings). The default behavior is as follows:

Tip: Sometimes tests placed in subfolders aren't discovered because such test files cannot be imported. To make them importable, create an empty file named __init__.py in that folder.

If the test discovery succeeds, you'll see tests listed in the Test Explorer: 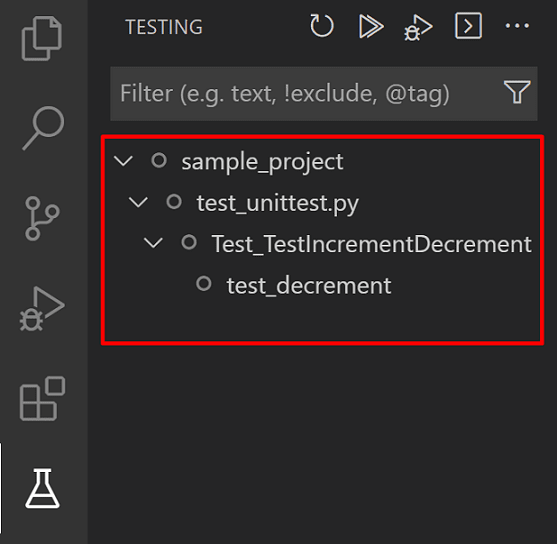 If discovery fails (for example, the test framework isn't installed or you have a syntax error in your test file), you'll see an error message displayed in the Test Explorer. You can check the Python output panel to see the entire error message (use the View > Output menu command to show the Output panel, then select Python from the dropdown on the right side).

Once VS Code recognizes tests, it provides several ways to run those tests as described in Run tests.

You can run tests using any of the following actions:

After a test run, VS Code displays results directly in the editor as gutter decorations. Failed tests will also be highlighted in the editor, with a Peek View that displays the test run error message and a history of all of the tests' runs. You can press Escape to dismiss the view, and you can disable it by opening the User settings (Preferences: Open Settings (UI) command in the Command Palette) and changing the value of the Testing: Automatically Open Peek View setting to never.

In the Test Explorer, results are shown for individual tests and any classes and files containing those tests.

Support for running tests in parallel with pytest is available through the pytest-xdist package. To enable parallel testing:

You might occasionally need to step through and analyze tests in the debugger, either because the tests themselves have a code defect you need to track down or in order to better understand why an area of code being tested is failing.

For example, the test_decrement functions given earlier are failing because the assertion itself is faulty. The following steps demonstrate how to analyze the test:

You can use the following commands from the Command Palette to debug tests:

You can also change the default behavior of clicking on the gutter decoration to debug tests instead of run, by changing the testing.defaultGutterClickAction setting value to debug in your settings.json file.

The debugger works the same for tests as for other Python code, including breakpoints, variable inspection, and so on. To customize settings for debugging tests, you can specify "purpose": ["debug-test"] in the launch.json file in the .vscode folder from your workspace. This configuration will be used when you run Test: Debug All Tests, Test: Debug Tests in Current File and Test: Debug Test at Cursor commands.

For example, the configuration below in the launch.json file disables the justMyCode setting for debugging tests:

If you have more than one configuration entry with "purpose": ["debug-test"], the first definition will be used since we currently don't support multiple definitions for this request type.

For more information on debugging, see Python debugging configurations and the general VS Code Debugging article.

Below are all the supported commands for testing with the Python extension in VS Code:

The behavior of testing with Python is driven by general UI settings provided by VS Code, and settings that are specific to Python and to whichever framework you've enabled.

The settings that affect the UI of the testing features are provided by VS Code itself, and can be found in the VS Code Settings editor when you search for "Testing".

The default arguments for unittest are as follows:

To stop a test run on the first failure, add the fail fast option "-f" to the arguments array.

You can also configure pytest using a pytest.ini file as described on pytest Configuration.

Note If you have the pytest-cov coverage module installed, VS Code doesn't stop at breakpoints while debugging because pytest-cov is using the same technique to access the source code being run. To prevent this behavior, include --no-cov in pytestArgs when debugging tests, for example by adding "env": {"PYTEST_ADDOPTS": "--no-cov"} to your debug configuration. (See Debug Tests above about how to set up that launch configuration.) (For more information, see Debuggers and PyCharm in the pytest-cov documentation.)