Python debugging in VS Code

The Python extension supports debugging of several types of Python applications. For a short walkthrough of basic debugging, see Tutorial - Configure and run the debugger. Also see the Flask tutorial. Both tutorials demonstrate core skills like setting breakpoints and stepping through code.

For general debugging features such as inspecting variables, setting breakpoints, and other activities that aren't language-dependent, review VS Code debugging.

A configuration drives VS Code's behavior during a debugging session. Configurations are defined in a launch.json file that's stored in a .vscode folder in your workspace.

Note: To change debugging configuration, your code must be stored in a folder.

To initialize debug configurations, first select the Run view in the sidebar:

If you don't yet have any configurations defined, you'll see a button to Run and Debug and a link to create a configuration (launch.json) file: 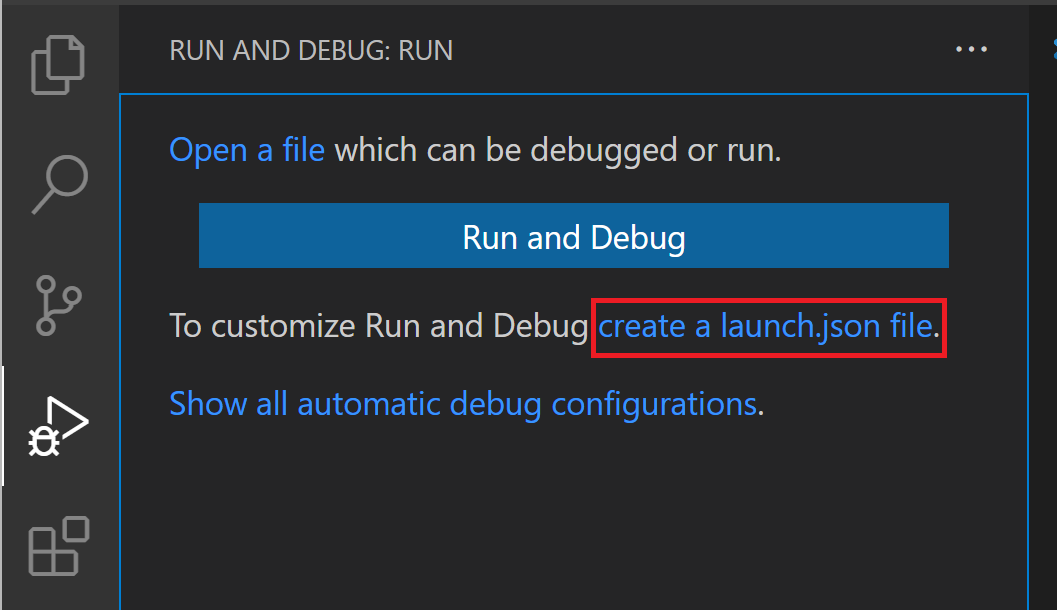 To generate a launch.json file with Python configurations, do the following steps: 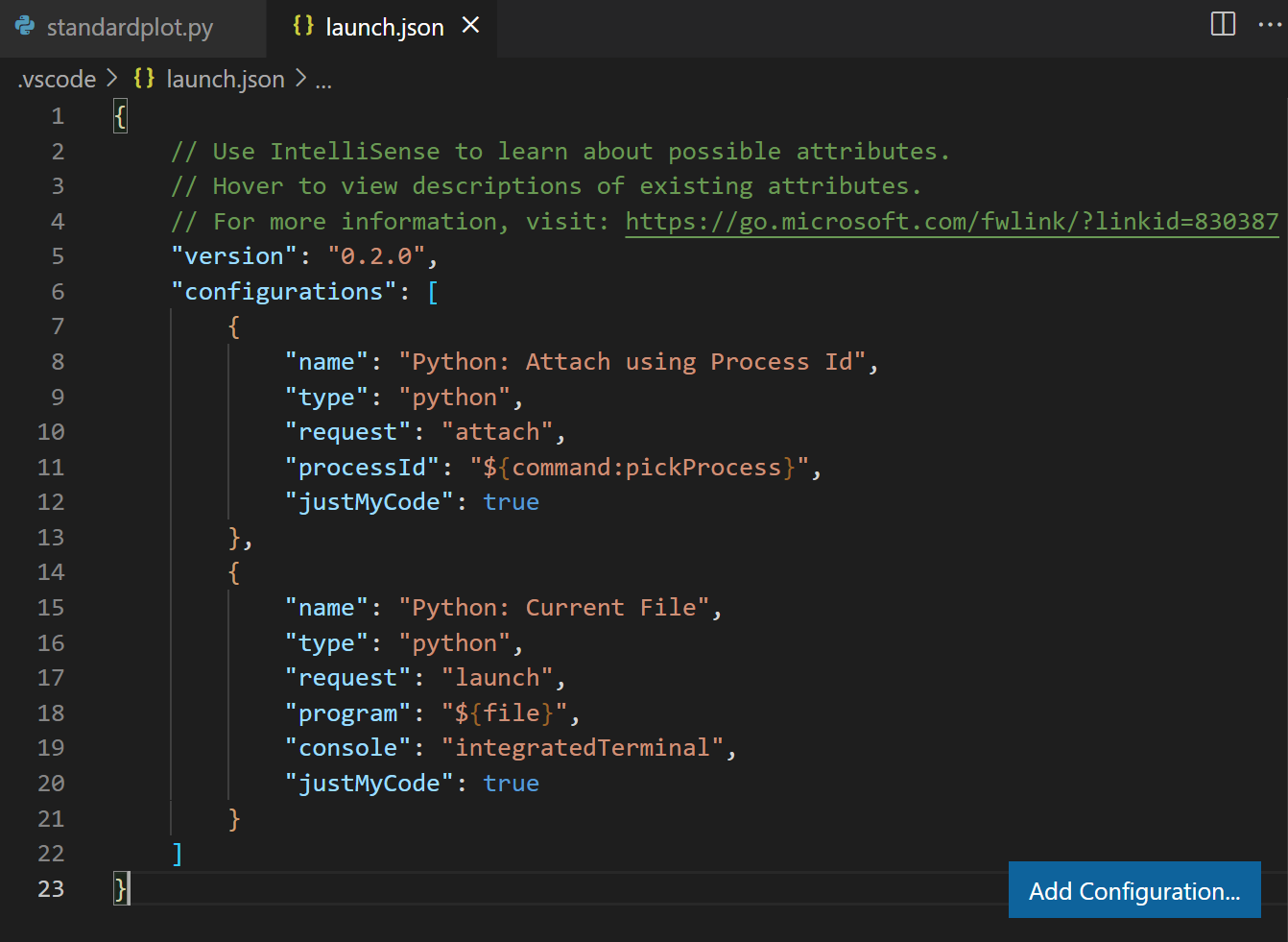 See Debugging specific app types for details on all of these configurations.

By default, the debugger uses the same interpreter selected for your workspace, just like other features of Python extension for VS Code. To use a different interpreter for debugging specifically, set the value for python in launch.json for the applicable debugger configuration. Alternately, select the named interpreter on the Status Bar to select a different one.

If you're only interested in debugging a Python script, the simplest way is to select the down-arrow next to the run button on the editor and select Debug Python File in Terminal.

If you're looking to debug a web application using Flask, Django or FastAPI, the Python extension provides dynamically created debug configurations based on your project structure under the Show all automatic debug configurations option, through the Run and Debug view. 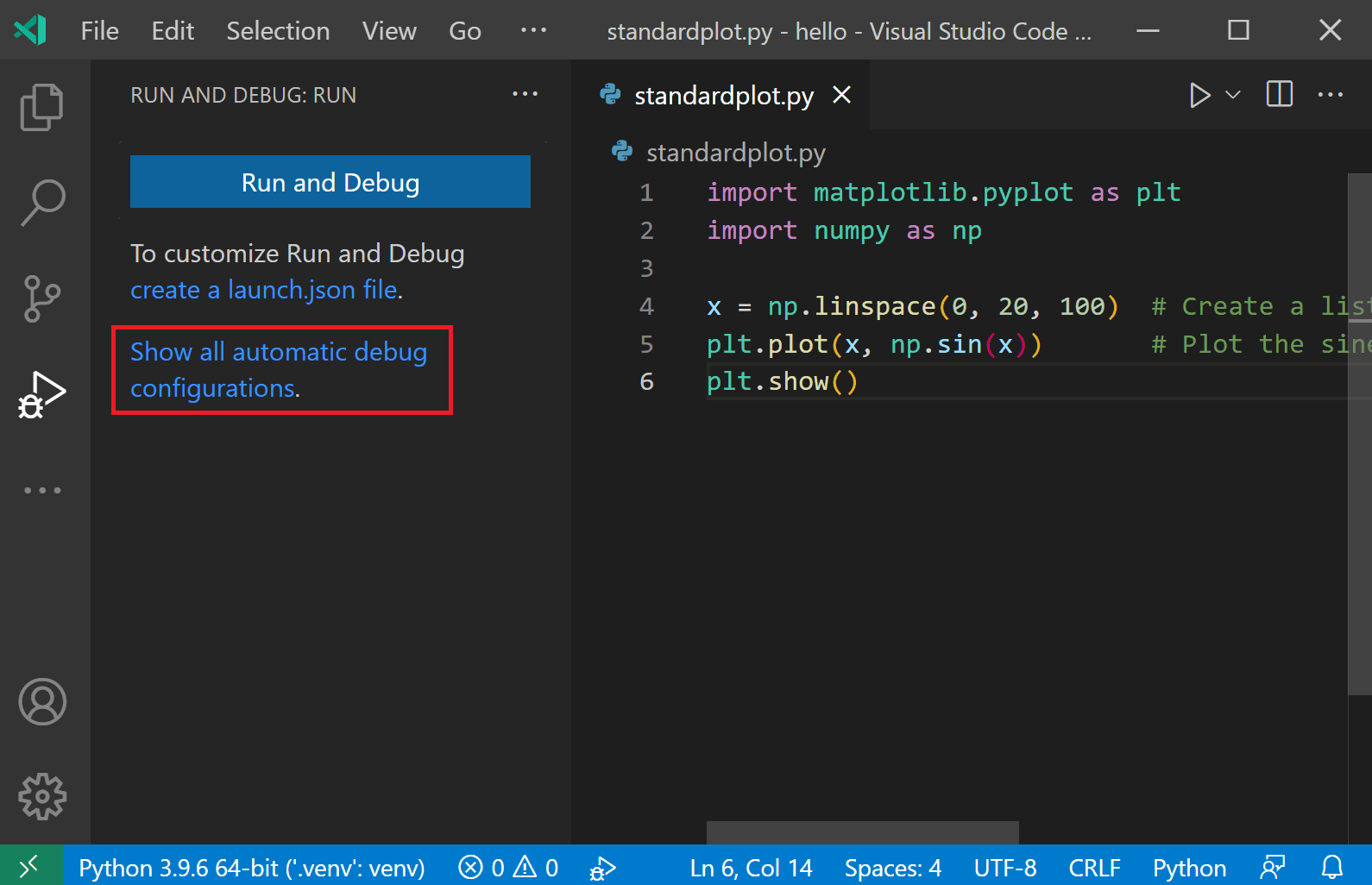 But if you're looking to debug other kinds of applications, you can start the debugger through the Run view by clicking on the Run and Debug button. 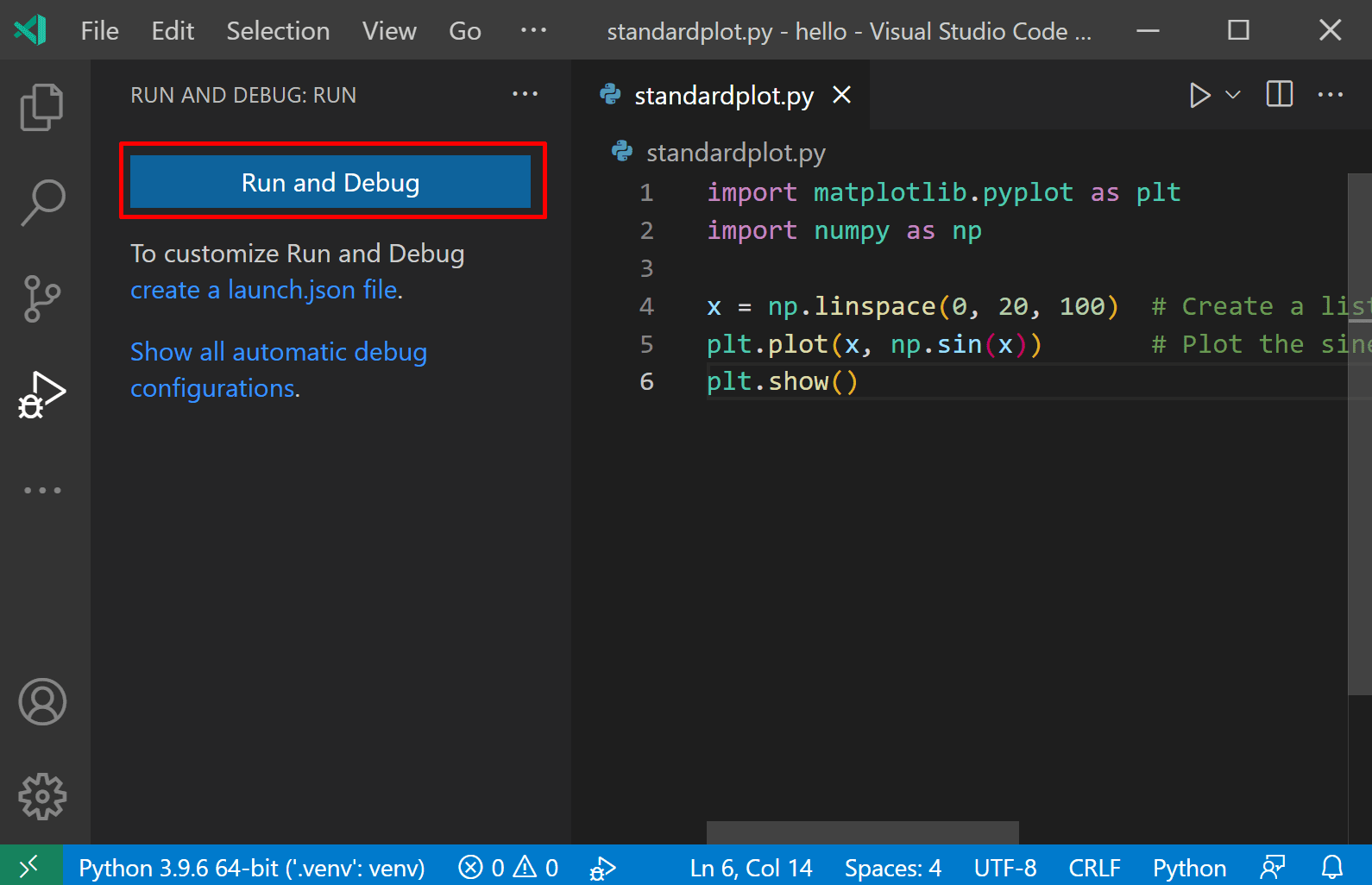 When no configuration has been set, you'll be given a list of debugging options. Here, you can select the appropriate option to quickly debug your code.

For information about creating and using debugging configurations, see the Initialize configurations and Additional configurations sections. Once a configuration is added, it can be selected from the dropdown list and started using the Start Debugging button.

As an example, from the command line, you could start the debugger using a specified port (5678) and script using the following syntax. This example assumes the script is long-running and omits the --wait-for-client flag, meaning that the script will not wait for the client to attach.

You would then use the following configuration to attach from the VS Code Python extension.

If you wanted to debug remote code or code running in a docker container, on the remote machine or container, you would need to modify the previous CLI command to specify a host.

The associated configuration file would then look as follows.

Note: Be aware that when you specify a host value other than 127.0.0.1 or localhost you are opening a port to allow access from any machine, which carries security risks. You should make sure that you're taking appropriate security precautions, such as using SSH tunnels, when doing remote debugging.

Note: [<arg>] can be used to pass command-line arguments along to the app being launched.

Debugging by attaching over a network connection

There may be instances where you need to debug a Python script that's invoked locally by another process. For example, you may be debugging a web server that runs different Python scripts for specific processing jobs. In such cases, you need to attach the VS Code debugger to the script once it's been launched:

Note: On Windows computers, you may need to install Windows 10 OpenSSH to have the ssh command.

The following steps outline the general process to set up an SSH tunnel. An SSH tunnel allows you to work on your local machine as if you were working directly on the remote in a more secure manner than if a port was opened for public access.

On the remote computer:

On the local computer:

Now that an SSH tunnel has been set up to the remote computer, you can begin your debugging.

When you first create launch.json, there are two standard configurations that run the active file in the editor in either the integrated terminal (inside VS Code) or the external terminal (outside of VS Code):

The specific settings are described in the following sections. You can also add other settings, such as args, that aren't included in the standard configurations.

Provides the name for the debug configuration that appears in the VS Code dropdown list.

Identifies the type of debugger to use; leave this set to python for Python code.

Specifies the mode in which to start debugging:

Provides the fully qualified path to the python program's entry module (startup file). The value ${file}, often used in default configurations, uses the currently active file in the editor. By specifying a specific startup file, you can always be sure of launching your program with the same entry point regardless of which files are open. For example:

You can also rely on a relative path from the workspace root. For example, if the root is /Users/Me/Projects/PokemonGo-Bot then you can use the following example:

Provides the ability to specify the name of a module to be debugged, similarly to the -m argument when run at the command line. For more information, see Python.org

The full path that points to the Python interpreter to be used for debugging.

If not specified, this setting defaults to the interpreter selected for your workspace, which is equivalent to using the value ${command:python.interpreterPath}. To use a different interpreter, specify its path instead in the python property of a debug configuration.

Alternately, you can use a custom environment variable that's defined on each platform to contain the full path to the Python interpreter to use, so that no other folder paths are needed.

If you need to pass arguments to the Python interpreter, you can use the pythonArgs property.

Specifies arguments to pass to the Python program. Each element of the argument string that's separated by a space should be contained within quotes, for example:

Specifies how program output is displayed as long as the defaults for redirectOutput aren't modified.

There is more than one way to configure the Run button, using the purpose option. Setting the option to debug-test, defines that the configuration should be used when debugging tests in VS Code. However, setting the option to debug-in-terminal, defines that the configuration should only be used when accessing the Run Python File button on the top-right of the editor (regardless of whether the Run Python File or Debug Python File options the button provides is used). Note: The purpose option can't be used to start the debugger through F5 or Run > Start Debugging.

Allows for the automatic reload of the debugger when changes are made to code after the debugger execution has hit a breakpoint. To enable this feature set {"enable": true} as shown in the following code.

*Note: When the debugger performs a reload, code that runs on import might be executed again. To avoid this situation, try to only use imports, constants, and definitions in your module, placing all code into functions. Alternatively, you can also use if __name__=="__main__" checks.

Specifies whether to enable subprocess debugging. Defaults to false, set to true to enable. For more information, see multi-target debugging.

Specifies the current working directory for the debugger, which is the base folder for any relative paths used in code. If omitted, defaults to ${workspaceFolder} (the folder open in VS Code).

As an example, say ${workspaceFolder} contains a py_code folder containing app.py, and a data folder containing salaries.csv. If you start the debugger on py_code/app.py, then the relative paths to the data file vary depending on the value of cwd:

This option is typically disabled when using "console": "integratedTerminal" or "console": "externalTerminal" because there's no need to duplicate the output in the debug console.

When omitted or set to true (the default), restricts debugging to user-written code only. Set to false to also enable debugging of standard library functions.

When set to true, activates debugging features specific to the Django web framework.

When set to true and used with "console": "externalTerminal", allows for debugging apps that require elevation. Using an external console is necessary to capture the password.

When set to true, ensures that a Pyramid app is launched with the necessary pserve command.

If set to true, enables debugging of gevent monkey-patched code.

When set to true, activates debugging features specific to the Jinja templating framework.

The Python extension supports breakpoints and logpoints for debugging code. For a short walkthrough of basic debugging and using breakpoints, see Tutorial - Configure and run the debugger.

Breakpoints can also be set to trigger based on expressions, hit counts, or a combination of both. The Python extension supports hit counts that are integers, in addition to integers preceded by the ==, >, >=, <, <=, and % operators. For example, you could set a breakpoint to trigger after five occurrences by setting a hit count of >5 For more information, see conditional breakpoints in the main VS Code debugging article.

Invoking a breakpoint in code

In your Python code, you can call debugpy.breakpoint() at any point where you want to pause the debugger during a debugging session.

The Python extension automatically detects breakpoints that are set on non-executable lines, such as pass statements or the middle of a multiline statement. In such cases, running the debugger moves the breakpoint to the nearest valid line to ensure that code execution stops at that point.

To debug an app that requires administrator privileges, use "console": "externalTerminal" and "sudo": "True".

As you can see, this configuration specifies "env": {"FLASK_APP": "app.py"} and "args": ["run", "--no-debugger"]. The "module": "flask" property is used instead of program. (You may see "FLASK_APP": "${workspaceFolder}/app.py" in the env property, in which case modify the configuration to refer to only the filename. Otherwise, you may see "Cannot import module C" errors where C is a drive letter.)

If you want to run Flask's development server in development mode, use the following configuration:

There are many reasons why the debugger may not work. Sometimes the debug console reveals specific causes, but the main reasons are as follows: