This tutorial walks you through running Visual Studio Code in a Docker container using the Dev Containers extension. You need no prior knowledge of Docker to complete this tutorial.

Docker is needed to create and manage your containers.

Run the Docker Desktop application to start Docker. You will know it's running if you look in the activity tray and see the Docker whale icon.

Docker might take a few minutes to start. If the whale icon is animated, it is probably still in the process of starting. You can click on the icon to see the status. 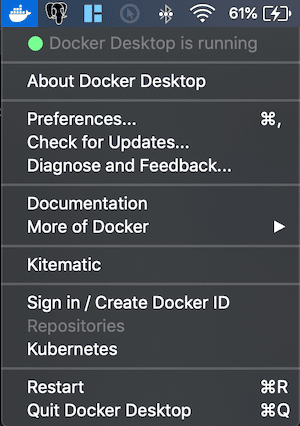 Once Docker is running, you can confirm that everything is working by opening a new terminal window and typing the command:

With the Dev Containers extension installed, you will see a new Status bar item at the far left.

The Remote Status bar item can quickly show you in which context VS Code is running (local or remote) and clicking on the item will bring up the Dev Containers commands.

To create a Docker container, we are going to open a GitHub repository with a Node.js project.

Select Dev Containers: Try a Dev Container Sample... from the command list that appears and select the Node sample from the list.

Wait for the container to build

The window will then reload, but since the container does not exist yet, VS Code will create one and clone the sample repository into an isolated container volume. This may take some time, and a progress notification will provide status updates. Fortunately, this step isn't necessary the next time you open the folder since the container will already exist.

After the container is built, VS Code automatically connects to it and maps the project folder from your local file system into the container.

Once the container is running and you're connected, you should see your remote context change in the bottom left of the Status bar:

One of the useful things about developing in a container is that you can use specific versions of dependencies that your application needs without impacting your local development environment.

The specific container for this tutorial has Node.js v12 installed, which you can check by opening a new terminal Terminal > New Terminal (⌃⇧` (Windows, Linux Ctrl+Shift+`)) and entering:

This should show the following versions:

We can now hit F5, which will run the application inside the container. Once the process starts, navigate to http://localhost:3000 and you should see the simple Node.js server running!

You can end your session in the container and go back to running VS Code locally with File > Close Remote Connection.

This next section describes in more detail how the Dev Containers extension sets up and configures your containers.

The Dev Containers extension uses the files in the .devcontainer folder, namely devcontainer.json, and an optional Dockerfile or docker-compose.yml, to create your dev containers.

The devcontainer.json is basically a config file that determines how your dev container gets built and started.

The above example is taken from the vscode-remote-try-node repo we used in the tutorial.

This has been a brief overview of what is possible using dev containers. As a next step, we recommend checking out how you can open an existing folder from your machine in a container or opening a GitHub repository or PR in a container.

Check out the other Remote Development extensions.

Or get them all by installing the Remote Development Extension Pack.