Working with Markdown files in Visual Studio Code is simple, straightforward, and fun. Besides VS Code's basic editing, there are a number of Markdown specific features that will help you be more productive.

In addition to the functionality VS Code provides out of the box, you can install an extension for greater functionality.

VS Code supports Markdown files out of the box. You just start writing Markdown text, save the file with the .md extension and then you can toggle the visualization of the editor between the code and the preview of the Markdown file; obviously, you can also open an existing Markdown file and start working with it. To switch between views, press ⇧⌘V (Windows, Linux Ctrl+Shift+V) in the editor. You can view the preview side-by-side (⌘K V (Windows, Linux Ctrl+K V)) with the file you are editing and see changes reflected in real-time as you edit.

Here is an example with a very simple file. 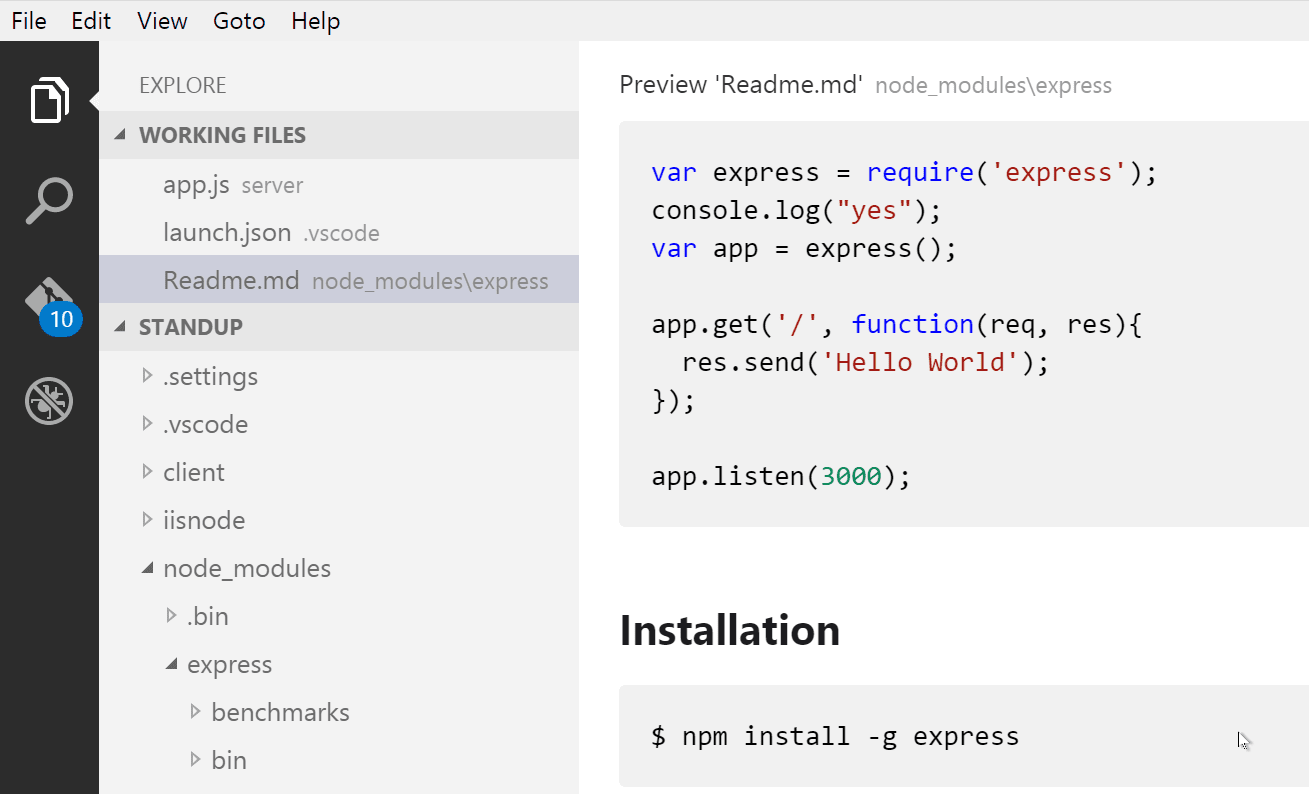 You can lock a Markdown preview using the Markdown: Toggle Preview Locking command to keep it locked to its current Markdown document. Locked previews are indicated by [Preview] in the title:

The currently selected line in the editor is indicated in the Markdown preview by a light gray bar in the left margin:

Additionally, double clicking an element in the Markdown preview will automatically open the editor for the file and scroll to the line nearest the clicked element. 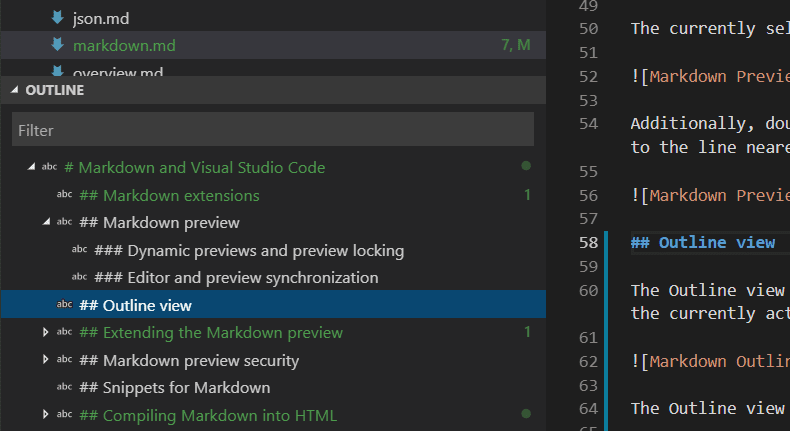 The Outline view is a great way to review your document's header structure and outline.

Extensions can contribute custom styles and scripts to the Markdown preview to change its appearance and add new functionality. Here's a set of example extensions that customize the preview:

Using your own CSS

For example, to load a stylesheet called Style.css at the root of your current workspace, use File > Preferences > Settings to bring up the workspace settings.json file and make this update:

To create hard line breaks, Markdown requires two or more spaces at the end of a line. Depending on your user or workspace settings, VS Code may be configured to remove trailing whitespace. In order to keep trailing whitespace in Markdown files only, you can add these lines to your settings.json:

For security reasons, VS Code restricts the content displayed in the Markdown preview. This includes disabling script execution and only allowing resources to be loaded over https.

When the Markdown preview blocks content on a page, an alert popup is shown in the top right corner of the preview window:

You can change what content is allowed in the Markdown preview by clicking on this popup or running the Markdown: Change preview security settings command in any Markdown file:

The Markdown preview security settings apply to all files in the workspace.

Here are the details about each of these security levels:

This is the default setting. Only loads trusted content and disables script execution. Blocks http images.

It is strongly recommended that you keep Strict security enabled unless you have a very good reason to change it AND you trust all Markdown files in the workspace.

Keeps scripts disabled but allows content to be loaded over http.

Disables additional security in the preview window. This allows script execution and also allows content to be loaded over http.

There are several built-in Markdown snippets included in VS Code - press ⌃Space (Windows, Linux Ctrl+Space) (Trigger Suggest) and you get a context specific list of suggestions.

VS Code integrates with Markdown compilers through the integrated task runner. We can use this to compile .md files into .html files. Let's walk through compiling a simple Markdown document.

For this walkthrough, we use the popular Node.js module, markdown-it.

Note: There are many Markdown compilers to choose from beyond markdown-it. Pick the one that best suits your needs and environment.

Open VS Code on an empty folder and create a sample.md file.

Note: You can open a folder with VS Code by either selecting the folder with File > Open Folder or navigating to the folder and typing 'code .' at the command line.

The next step is to set up the task configuration file tasks.json. To do this, run Terminal > Configure Tasks and click Create tasks.json file from templates. VS Code then presents a list of possible tasks.json templates to choose from. Select Others since we want to run an external command.

This generates a tasks.json file in your workspace .vscode folder with the following content:

To use markdown-it to compile the Markdown file, change the contents as follows:

Tip: While the sample is there to help with common configuration settings, IntelliSense is available for the tasks.json file as well to help you along. Use ⌃Space (Windows, Linux Ctrl+Space) to see the available settings.

Since there can be more than one build task in more complex environments, we prompt you to pick the task to execute after pressing ⇧⌘B (Windows, Linux Ctrl+Shift+B) (Run Build Task). In addition, we allow you to scan the output for compile problems. Since we only want to convert the Markdown file to HTML, select Never scan the build output from the presented list.

At this point, you should see an additional file show up in the file list sample.html.

If you want to make the Compile Markdown task the default build task to run, execute Configure Default Build Task from the global Terminal menu and select Compile Markdown from the presented list. The final tasks.json file will then look like this:

Let's take things a little further and automate Markdown compilation with VS Code. We can do so with the same task runner integration as before, but with a few modifications.

Step 1: Install Gulp and some plug-ins

We use Gulp to create a task that automates Markdown compilation. We also use the gulp-markdown plug-in to make things a little easier.

We need to install gulp both globally (-g switch) and locally:

Note: gulp-markdown-it is a Gulp plug-in for the markdown-it module we were using before. There are many other Gulp Markdown plug-ins you can use, as well as plug-ins for Grunt.

You can test that your gulp installation was successful by typing gulp -v. You should see a version displayed for both the global (CLI) and local installations.

Open VS Code on the same folder from before (contains sample.md and tasks.json under the .vscode folder), and create gulpfile.js at the root.

What is happening here?

To complete the tasks integration with VS Code, we will need to modify the task configuration from before to run the default Gulp task we just created. You can either delete the tasks.json file or empty it, only keeping the "version": "2.0.0" property. Now execute Run Task from the global Terminal menu. Observe that you are presented with a picker listing the tasks defined in the gulp file. Select gulp: default to start the task. We allow you to scan the output for compile problems. Since we only want to convert the Markdown file to HTML, select Never scan the build output from the presented list. At this point, if you create and/or modify other Markdown files, you see the respective HTML files generated and/or changes reflected on save. You can also enable Auto Save to make things even more streamlined.

If you want to make the gulp: default task the default build task executed when pressing ⇧⌘B (Windows, Linux Ctrl+Shift+B), run Configure Default Build Task from the global Terminal menu and select gulp: default from the presented list. The final tasks.json file will then look like this:

The gulp: default task runs in the background and watches for file changes to Markdown files. If you want to stop the task, you can use Terminate Task from the global Terminal menu.

Is there spell checking?

Not installed with VS Code but there are spell checking extensions. Check the VS Code Marketplace to look for useful extensions to help with your workflow.

In the walkthrough above, I didn't find the Configure Task command in the Command Palette?

You may have opened a file in VS Code rather than a folder. You can open a folder by either selecting the folder with File > Open Folder or navigating to the folder and typing 'code .' at the command line.