JSON is a data format that is common in configuration files like package.json or project.json. We also use it extensively in Visual Studio Code for our configuration files. When opening a file that ends with .json, VS Code provides features to make it simpler to write or modify the file's content.

For properties and values, both for JSON data with or without a schema, we offer up suggestions as you type with IntelliSense. You can also manually see suggestions with the Trigger Suggestions command (⌃Space (Windows, Linux Ctrl+Space)).

We also perform structural and value verification based on an associated JSON schema giving you red squiggles. To disable validation, use the json.validate.enable setting.

We also offer IntelliSense for specific value sets such as package and project dependencies in package.json, project.json, and bower.json.

JSON files can get large and we support quick navigation to properties using the Go to Symbol command (⇧⌘O (Windows, Linux Ctrl+Shift+O)).

When you hover over properties and values for JSON data with or without schema, we will provide additional context.

You can format your JSON document using ⇧⌥F (Windows Shift+Alt+F, Linux Ctrl+Shift+I) or Format Document from the context menu.

You can fold regions of source code using the folding icons on the gutter between line numbers and line start. Folding regions are available for all object and array elements.

In addition to the default JSON mode following the JSON specification, VS Code also has a JSON with Comments (jsonc) mode. This mode is used for the VS Code configuration files such as settings.json, tasks.json, or launch.json. When in the JSON with Comments mode, you can use single line (//) as well as block comments (/* */) as used in JavaScript. The mode also accepts trailing commas, but they are discouraged and the editor will display a warning.

The current editor mode is indicated in the editor's Status Bar. Select the mode indicator to change the mode and to configure how file extensions are associated to modes. You can also directly modify the files.associations setting to associate file names or file name patterns to jsonc.

To understand the structure of JSON files, we use JSON schemas. JSON schemas describe the shape of the JSON file, as well as value sets, default values, and descriptions. The JSON support shipped with VS Code supports all draft versions from Draft 4 to JSON Schema Draft 2020-12.

Servers like JSON Schema Store provide schemas for most of the common JSON-based configuration files. However, schemas can also be defined in a file in the VS Code workspace, as well as the VS Code settings files.

The association of a JSON file to a schema can be done either in the JSON file itself using the $schema attribute, or in the User or Workspace settings (File > Preferences > Settings) under the property json.schemas.

VS Code extensions can also define schemas and schema mapping. That's why VS Code already knows about the schema of some well-known JSON files such as package.json, bower.json, and tsconfig.json.

Mapping in the JSON

In the following example, the JSON file specifies that its contents follow the CoffeeLint schema.

Note that this syntax is VS Code-specific and not part of the JSON Schema specification. Adding the $schema key changes the JSON itself, which systems consuming the JSON might not expect, for example, schema validation might fail. If this is the case, you can use one of the other mapping methods.

Mapping in the User Settings

The following excerpt from User Settings shows how .babelrc files are mapped to the babelrc schema located on https://json.schemastore.org/babelrc.

Tip: In addition to defining a schema for .babelrc, also make sure that .babelrc is associated to the JSON language mode. This is also done in the settings using the files.association array setting.

Mapping to a schema in the workspace

To map a schema that is located in the workspace, use a relative path. In this example, a file in the workspace root called myschema.json will be used as the schema for all files ending with .foo.json.

Mapping to a schema defined in settings

To map a schema that is defined in the User or Workspace settings, use the schema property. In this example, a schema is defined that will be used for all files named .myconfig.

Mapping a schema in an extension

Schemas and schema associations can also be defined by an extension. Check out the jsonValidation contribution point.

The file match syntax supports the '*' wildcard. Also, you can define exclusion patterns, starting with '!'. For an association to match, at least one pattern needs to match and the last matching pattern must not be an exclusion pattern.

The following example shows a schema for a key binding settings file defining a snippet:

This is an example in a JSON schema: 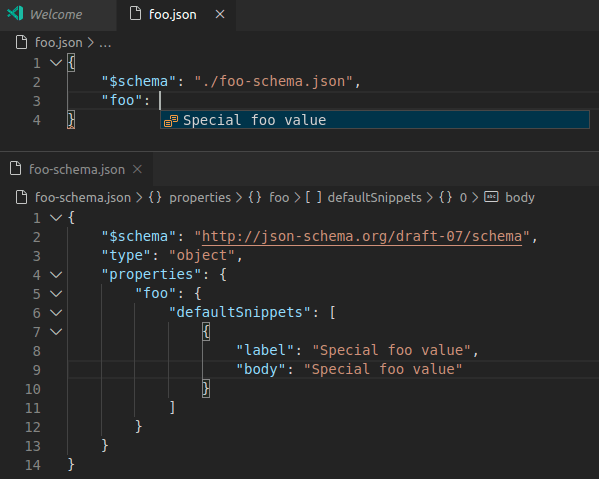 Use the property defaultSnippets to specify any number of snippets for the given JSON object.

Note that defaultSnippets is not part of the JSON schema specification but a VS Code-specific schema extension.

Use rich formatting in hovers

VS Code will use the standard description field from the JSON Schema specification in order to provide information about properties on hover and during autocomplete.

If you want your descriptions to support formatting like links, you can opt in by using Markdown in your formatting with the markdownDescription property.

Note that markdownDescription is not part of the JSON schema specification but a VS Code-specific schema extension.

json.schemaDownload.enable controls whether the JSON extension fetches JSON schemas from http and https.

A warning triangle will show in the status bar when the current editor would like to use schemas that cannot be downloaded.