Visual Studio Code has the ability to integrate with common shells, allowing the terminal to understand more about what's actually happening inside the shell. This additional information enables some useful features such as working directory detection and command detection, decorations and navigation.

By default, the shell integration script should automatically activate on supported shells launched from VS Code. This is done by injecting arguments and/or environment variables when the shell session launches. This automatic injection can be disabled by setting terminal.integrated.shellIntegration.enabled to false.

This standard, easy way will not work for some advanced use cases like in sub-shells, through a regular ssh session (when not using the Remote - SSH extension) or for some complex shell setups. The recommended way to enable shell integration for those is manual installation.

Note: On Windows, you'll need PowerShell 7 (pwsh) for shell integration support. You can install via https://aka.ms/PSWindows.

To manually install shell integration, the VS Code shell integration script needs to run during your shell's initialization. Where and how to do this depends on the shell and OS you're using. When using manual install it's recommended to set terminal.integrated.shellIntegration.enabled to false, though not mandatory.

Tip: When using the Insiders build, replace code with code-insiders below.

Add the following to your ~/.bashrc file. Run code ~/.bashrc in bash to open the file in VS Code.

Add the following to your PowerShell profile. Run code $Profile in pwsh to open the file in VS Code.

Add the following to your ~/.zshrc file. Run code ~/.zshrc in bash to open the file in VS Code.

The recommended approach above to install shell integration relies on executing our CLI to find the path to the shell integration script, this is great at it works cross-platform and also with all install types provided code in on the $PATH. This currently launches Node.js in order to fetch the path though which can add a small delay to shell startup. To reduce this, you can inline the script above by resolving the path ahead of time and adding it directly into your init script.

Command decorations and the overview ruler

One of the things shell integration enables is the ability to get the exit codes of the commands run within the terminal. Using this information, decorations are added to the left of the line to indicate whether the command succeeded or failed. These decorations also show up in the relatively new overview ruler in the scroll bar, just like in the editor.

The decorations can be interacted with to give some contextual actions like re-running the command:

The command decorations can be configured with the following settings:

The commands detected by shell integration feed into the command navigation feature (Ctrl/Cmd+Up, Ctrl/Cmd+Down) to give it more reliable command positions. This feature allows for quick navigation between commands and selection of their output. Hold Shift as well to select from the current position to the command. 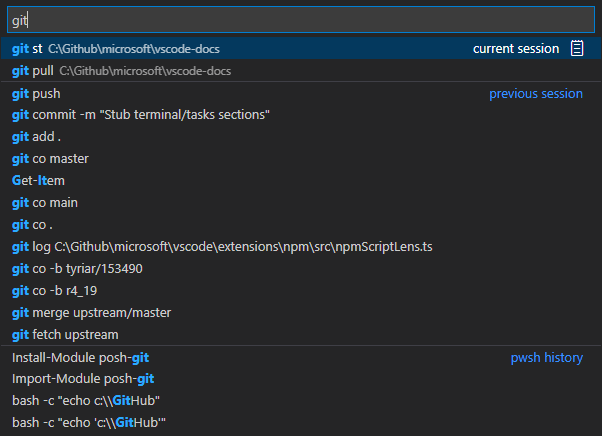 Some other functionality of the command:

There is currently no keybinding assigned by default but you can add your own keyboard shortcut. For example, the below replaces Ctrl+R with runRecentCommand, with Ctrl+Alt+R available to fallback to the shell's regular behavior:

Similar to the run recent command feature, the Terminal: Go to Recent Directory command keeps track of directories that have been visited and allows quick filtering and navigating (cd) to them.

Alt can be held to write the text to the terminal without running it.

Shell integration tells VS Code what the current working directory of the shell is. This information is not possible to get on Windows without trying to detect the prompt through regex and required polling on macOS and Linux which isn't good for performance.

The current working directory is also used to show the directory in the terminal tab, in the run recent command quick pick and for the "terminal.integrated.splitCwd": "inherited" feature.

VS Code supports Final Term's shell integration sequences which allows non-VS Code shell integration scripts to work in VS Code. This results in a somewhat degraded experience though as it doesn't support as many features as OSC 633. Here are the specific sequences that are supported:

This sequence adds a mark to the left of the line it was triggered on and also adds an annotation to the scroll bar:

These marks integrate with command navigation to make them easy to navigate to via ctrl/cmd+up and ctrl/cmd+down by default.

When does automatic injection not work?

There are several cases where automatic injection doesn't work, here are some common cases:

Why are command decorations showing when the feature is disabled?

The likely cause of this is that your system has shell integration for another terminal installed that VS Code understands. If you don't want any decorations, you can hide them with the following setting:

Alternatively, you could remove the shell integration script from your shell rc/startup script but you will lose access to command-aware features like command navigation.