TypeScript is a typed superset of JavaScript that transpiles to plain JavaScript. It offers classes, modules, and interfaces to help you build robust components.

You can test your install by checking the version or help.

Another option is to install the TypeScript compiler locally in your project (npm install --save-dev typescript) and has the benefit of avoiding possible interactions with other TypeScript projects you may have.

Later in the article, we'll discuss how you can change the version of TypeScript language service that VS Code uses.

A simple tsconfig.json looks like this for ES5, CommonJS modules and source maps:

Now when you create a .ts file as part of the project we will offer up rich editing experiences and syntax validation.

VS Code integrates with tsc through our integrated task runner. We can use this to transpile .ts files into .js files. Another benefit of using VS Code tasks is that you get integrated error and warning detection displayed in the Problems panel. Let's walk through transpiling a simple TypeScript Hello World program.

Open VS Code on an empty folder and create a helloworld.ts file, place the following code in that file...

To test that you have the TypeScript compiler tsc installed correctly and a working Hello World program, open a terminal and type tsc helloworld.ts. You can use the Integrated Terminal (⌃` (Windows, Linux Ctrl+`)) directly in VS Code.

You should now see the transpiled helloworld.js JavaScript file, which you can run if you have Node.js installed, by typing node helloworld.js.

Execute Run Build Task (⇧⌘B (Windows, Linux Ctrl+Shift+B)) from the global Terminal menu. If you created a tsconfig.json file in the earlier section, this should present the following picker:

If you selected tsc: watch, the TypeScript compiler watches for changes to your TypeScript files and runs the transpiler on each change.

Under the covers, we run the TypeScript compiler as a task. The command we use is: tsc -p .

You can also define the TypeScript build task as the default build task so that it is executed directly when triggering Run Build Task (⇧⌘B (Windows, Linux Ctrl+Shift+B)). To do so, select Configure Default Build Task from the global Terminal menu. This shows you a picker with the available build tasks. Select TypeScript tsc: build, which generates the following tasks.json file in a .vscode folder:

Notice that the task has a group JSON object that sets the task kind to build and makes it the default. Now when you select the Run Build Task command or press (⇧⌘B (Windows, Linux Ctrl+Shift+B)), you are not prompted to select a task and your compilation starts.

Tip: You can also run the program using VS Code's Run/Debug feature. Details about running and debugging Node.js applications in VS Code can be found in the Node.js tutorial

The VS Code task system can also detect build issues through a problem matcher. A problem matcher parses build output based on the specific build tool and provides integrated issue display and navigation. VS Code ships with many problem matchers and $tsc seen above in tasks.json is the problem matcher for TypeScript compiler output.

As an example, if there was a simple error (extra 'g' in console.log) in our TypeScript file, we may get the following output from tsc:

You can also use the keyboard to open the list ⇧⌘M (Windows, Linux Ctrl+Shift+M).

Tip: Tasks offer rich support for many actions. Check the Tasks topic for more information on how to configure them.

TypeScript debugging supports JavaScript source maps. To generate source maps for your TypeScript files, compile with the --sourcemap option or set the sourceMap property in the tsconfig.json file to true.

Having the generated JavaScript file in the same folder at the TypeScript source will quickly get cluttered on larger projects. You can specify the output directory for the compiler with the outDir attribute.

When you are working with TypeScript, you often don't want to see generated JavaScript files in the File Explorer or in Search results. VS Code offers filtering capabilities with a files.exclude workspace setting and you can easily create an expression to hide those derived files:

This pattern will match on any JavaScript file (**/*.js) but only if a sibling TypeScript file with the same name is present. The File Explorer will no longer show derived resources for JavaScript if they are compiled to the same location. 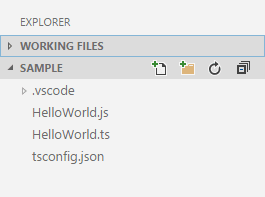 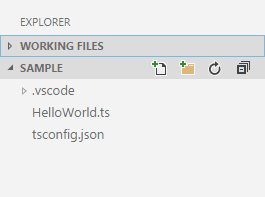 To exclude JavaScript files generated from both .ts and .tsx source files, use this expression:

This is a bit of a trick. The search glob pattern is used as a key. The settings above use two different glob patterns to provide two unique keys but the search will still match the same files.

Reasons for doing this include:

The active TypeScript version and its install location are displayed in the Status Bar when viewing a TypeScript file:

You have a few options if you want to change the default version of TypeScript in your workspace:

Using the workspace version of TypeScript

You can also tell VS Code to use a specific version of TypeScript in a particular workspace by adding a typescript.tsdk workspace setting pointing to the directory of the tsserver.js file:

The simplest way to try out the latest TypeScript features in VS Code is to install the JavaScript and TypeScript Nightly extension.

If you are working in a codebase with hundreds or thousands of TypeScript files, here are some steps you can take to improve both the editing experience in VS Code as well as compile times on the command line.

Make sure your tsconfig only includes files you care about

Use include or files in your project's tsconfig.json to make sure the project only includes the files that should be part of the project.

Instead of structuring your source code as a single large project, you can improve performance by breaking it up into smaller projects using project references. This allows TypeScript to load just a subset of your codebase at a time, instead of loading the entire thing.

See the TypeScript documentation for details on how to use project references and best practices for working with them.

How do I resolve a TypeScript "Cannot compile external module" error?

Why do I get different errors and warnings with VS Code than when I compile my TypeScript project?

Can I use the version of TypeScript that ships with VS 2022?

No, the TypeScript language service that ships with Visual Studio 2019 and 2022 isn't compatible with VS Code. You will need to install a separate version of TypeScript from npm.

Why are some errors reported as warnings?

By default, VS Code TypeScript displays code style issues as warnings instead of errors. This applies to:

Treating these as warnings is consistent with other tools, such as TSLint. These will still be displayed as errors when you run tsc from the command line.

You can disable this behavior by setting "typescript.reportStyleChecksAsWarnings": false in your User settings.