In this tutorial, you configure Visual Studio Code on macOS to use the Clang/LLVM compiler and debugger.

After configuring VS Code, you will compile and debug a simple C++ program in VS Code. This tutorial does not teach you about Clang or the C++ language. For those subjects, there are many good resources available on the Web.

If you have any trouble, feel free to file an issue for this tutorial in the VS Code documentation repository.

To successfully complete this tutorial, you must do the following:

Clang may already be installed on your Mac. To verify that it is, open a macOS Terminal window and enter the following command:

From the macOS Terminal, create an empty folder called projects where you can store all your VS Code projects, then create a subfolder called helloworld, navigate into it, and open VS Code in that folder by entering the following commands:

The code . command opens VS Code in the current working folder, which becomes your "workspace". As you go through the tutorial, you will create three files in a .vscode folder in the workspace:

Paste in the following source code:

The Activity Bar on the edge of Visual Studio Code lets you open different views such as Search, Source Control, and Run. You'll look at the Run view later in this tutorial. You can find out more about the other views in the VS Code User Interface documentation.

You can press the Tab key to insert the selected member. Then, when you add the opening parenthesis, you'll see information about arguments that the function requires.

The command setting specifies the program to run. In this case, "clang++" is the driver that causes the Clang compiler to expect C++ code and link against the C++ standard library.

The args array specifies the command-line arguments that will be passed to clang++. These arguments must be specified in the order expected by the compiler.

The label value is what you will see in the tasks list. Name this whatever you like.

The problemMatcher value selects the output parser to use for finding errors and warnings in the compiler output. For clang++, you'll get the best results if you use the $gcc problem matcher.

You can modify your tasks.json to build multiple C++ files by using an argument like "${workspaceFolder}/*.cpp" instead of ${file}. This will build all .cpp files in your current folder. You can also modify the output filename by replacing "${fileDirname}/${fileBasenameNoExtension}" with a hard-coded filename (for example "${workspaceFolder}/myProgram.out").

You might want to keep track of the value of a variable as your program executes. You can do this by setting a watch on the variable.

Ensure that the preLaunchTask value matches the label of the build task in the tasks.json file.

For more control over the C/C++ extension, create a c_cpp_properties.json file, which allows you to change settings such as the path to the compiler, include paths, which C++ standard to compile against (such as C++17), and more. 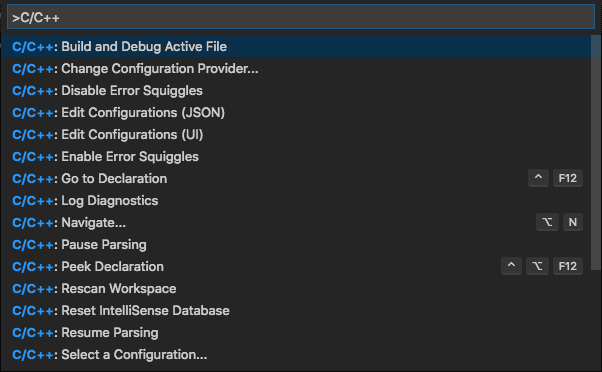 This opens the C/C++ Configurations page. 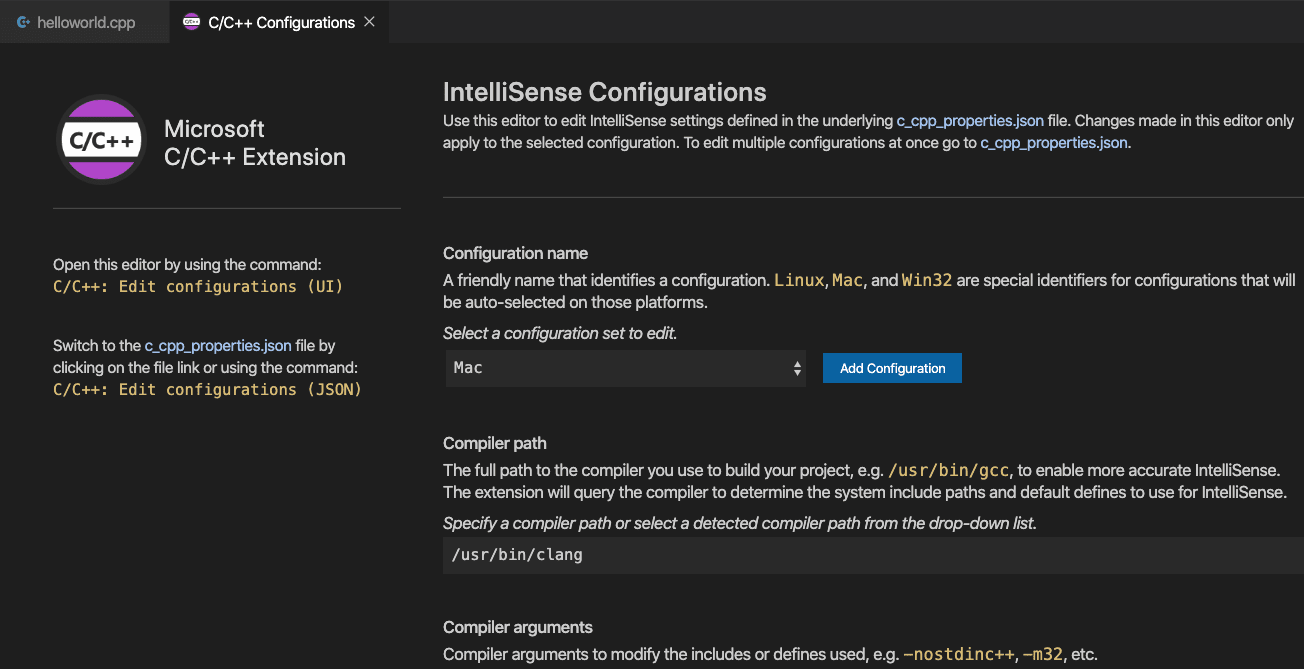 You only need to modify the Include path setting if your program includes header files that are not in your workspace or the standard library path.

compilerPath is an important configuration setting. The extension uses it to infer the path to the C++ standard library header files. When the extension knows where to find those files, it can provide useful features like smart completions and Go to Definition navigation.

The C/C++ extension attempts to populate compilerPath with the default compiler location based on what it finds on your system. The compilerPath search order is:

On the C/C++ Configuration screen, scroll down and expand Advanced Settings and ensure that Mac framework path points to the system header files. For example: /Library/Developer/CommandLineTools/SDKs/MacOSX.sdk/System/Library/Frameworks

VS Code is now configured to use Clang on macOS. The configuration applies to the current workspace. To reuse the configuration, just copy the JSON files to a .vscode folder in a new project folder (workspace) and change the names of the source file(s) and executable as needed.

The most common cause of errors (such as undefined _main, or attempting to link with file built for unknown-unsupported file format, and so on) occurs when helloworld.cpp is not the active file when you start a build or start debugging. This is because the compiler is trying to compile something that isn't source code, like your launch.json, tasks.json, or c_cpp_properties.json file.

If you see build errors mentioning "C++11 extensions", you may not have updated your tasks.json build task to use the clang++ argument --std=c++17. By default, clang++ uses the C++98 standard, which doesn't support the initialization used in helloworld.cpp. Make sure to replace the entire contents of your tasks.json file with the code block provided in the Run helloworld.cpp section.

On macOS Catalina and onwards, you might have a issue where you are unable to enter input, even after setting "externalConsole": true. A terminal window opens, but it does not actually allow you type any input.

The issue is currently tracked #5079.

The workaround is to have VS Code launch the terminal once. You can do this by adding and running this task in your tasks.json:

Once you accept the permission request, then the external console should appear when you debug.