Version 1.41 is now available! Read about the new features and fixes from November.

This tutorial walks you through the full process of containerizing an existing Python application using Docker and pushing the app image to a Docker registry, all within Visual Studio Code. The tutorial also demonstrates how to use base container images that include production-ready web servers (uwsgi and nginx), and how to configure those servers for both Django and Flask web apps, which is helpful to know no matter what your deployment target.

An introduction to containers

A container is specifically an instance of a Docker image, an executable package that contains everything needed to run your app: app code, configuration files, runtimes, and all of app's dependencies. An image can be used to instantiate any number of identical containers, which is especially useful when scaling out a cloud-based web app. Because container images are much smaller than virtual machine images, instances can be started and stopped much more quickly than virtual machines, enabling your app to be highly responsive to varying loads at a minimal cost. (When used to scale web apps, containers are often managed in clusters, which are then managed by an orchestration agent such as Kubernetes.)

Images, for their part, are built in multiple layers. The lowest or base layers of an image are typically common elements like the Python runtime; the higher layers contain more specialized elements like your application code. Because of layering, it takes very little time to rebuild an image when changing only the top layer with your app code. Similarly, when you push an image to a container registry, an online repository for images from which you can deploy to cloud services like Azure, only the modified layers need be uploaded and redeployed. As a result, using containers has only a small impact on your develop-test-deploy loop.

You experience the basics of containers and images in the course of this tutorial. For additional background, including helpful diagrams, refer to the Docker documentation.

If you don't already have an app you'd like to work with, use one of the following samples, which already include the Docker-related files described in this tutorial:

As mentioned earlier, a container registry is an online repository for container images that allows a cloud service, like Azure App Service, to acquire the image whenever it needs to start a container instance. Because the registry manages images separate from container instances, the same image in a registry can be used to start any number of concurrent instances, as happens when scaling out a web app to handle increased loads.

Because setting up a registry is a one-time affair, you do that step now before creating images that you then push to that registry.

Registry options include the following:

To create an Azure Container Registry, as shown later in this tutorial, do the following:

A container image is a bundle of your app code and its dependencies. To create an image, Docker needs a Dockerfile that describes how to structure the app code in the container and how to get that code running. The Dockerfile, in other words, is the template for your image. The Docker extension helps you create these files with customization for production servers.

Note: The Python samples linked earlier in this article already contain the necessary Docker files. The instructions here help you create files for an app of your own.

For Python, the Docker extension by default specifies the base image python:alpine in the Dockerfile and includes commands to run only the Flask development server. These defaults obviously don't accommodate Django, for one, and when deploying to the cloud, as with Azure App Service, you should also use production-ready web servers instead of a development server. (If you've used Flask, you're probably accustomed to seeing the development server's warning in this regard!)

For this reason, you need to modify the Dockerfile to use a base image with production servers, then provide the necessary configuration for your app. The following sections provide details for both Flask and Django.

By default, the image assumes that (a) your app code is located in an app folder, (b) the Flask app object is named app, and (c) the app object is located in main.py. Because your app may have a different structure, you can indicate the correct folders in the Dockerfile and provide the necessary parameters the uwsgi server in a uwsgi.ini file.

The following steps summarize the configuration used in the python-sample-vscode-flask-tutorial app, which you can adapt for your own code.

This base image already contains the production-ready uwsgi and nginx servers, but does not include Django. It's also necessary to provide settings to uwsgi so it can find the app's startup code.

The following steps summarize the configuration used in the python-sample-vscode-django-tutorial app that you can adapt for your own code.

Note: When building a Docker image on Windows, you typically see the message below, which is why the Dockerfile shown here includes the two chmod commands. If need to make other files writable, add the appropriate chmod commands to your Dockerfile.

Build and test the image

With the necessary Dockerfile in place, you're ready to build the Docker image and run it locally:

The Docker extension provides a simple UI to manage and even run your images rather than using the Docker CLI. Just expand the Image node in the Docker explorer, right-click any image, and select any of the menu items: 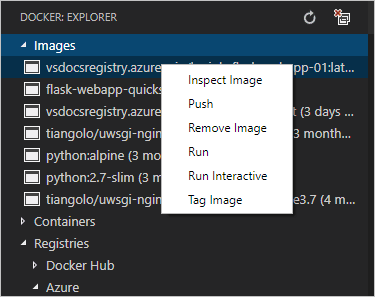 In addition, on the top of the Docker explorer, next to the refresh button, is a button for System Prune. This command cleans up any dangling and otherwise unused images on your local computer. It's a good idea to periodically use the command to reclaim space on your file system.

Push the image to a registry

Once you're confident that your image works, the next step is to push it to your container registry:

Tip: The first time you push an image, you see that VS Code uploads all of the different layers that make up the image. Subsequent push operations, however, upload only those layers that have changed. Because it's typically only your app code that's changes, those uploads happen much more quickly, making for a tight edit-build-deploy-test loop. To see this, make a small change to your code, rebuild the image, and then push again to the registry. The whole process typically completes in a matter of seconds.

Now that you've created a container with your app, you're ready to deploy it to any container-ready cloud service. For details on deploying to Azure App Service, see Deploy a container.

You can also learn more about the Docker extension for VS Code by visiting the vscode-docker repository on GitHub. Issues and contributions are welcome.

And again, if you encountered any problems in the course of this tutorial, feel free to file an issue for this tutorial in the VS Code documentation repository.