TypeScript is a typed superset of JavaScript that compiles to plain JavaScript. It offers classes, modules, and interfaces to help you build robust components. The TypeScript language specification has full details about the language.

In VS Code, you can see that you get language features such as syntax highlighting and bracket matching. When you were typing in the editor, you may have noticed IntelliSense, the smart code completions and suggestions provided by VS Code and the TypeScript language server. Below you can see the methods of console

When you select a method, you then get parameter help and can always get hover information.

Add a simple tsconfig.json which set the options to compile to ES5 and use CommonJS modules.

When editing tsconfig.json, IntelliSense (⌃Space (Windows, Linux Ctrl+Space)) will help you along the way.

By default, TypeScript includes all the .ts files in the current folder and subfolders if the files attribute isn't included, so we don't need to list helloworld.ts explicitly.

Now to build from the terminal, you can just type tsc and the TypeScript compiler knows to look at your tsconfig.json for project settings and compiler options.

Having the generated JavaScript file in the same folder as the TypeScript source will quickly get cluttered on larger projects, so you can specify the output directory for the compiler with the outDir attribute.

Delete helloworld.js and run the command tsc with no options. You will see that helloworld.js is now placed in the out directory.

See Compiling TypeScript to learn about other features of the TypeScript language service and how to use tasks to run your builds directly from VS Code.

TypeScript helps you avoid common programming mistakes through strong type checking. For example, if you assign a number to message, the TypeScript compiler will complain with 'error TS2322: Type '2' is not assignable to type 'string'. You can see type checking errors in VS Code both in the editor (red squiggles with hover information) and the Problems panel (⇧⌘M (Windows, Linux Ctrl+Shift+M)). The [ts] prefix lets you know this error is coming from the TypeScript language service.

The TypeScript language service has a powerful set of diagnostics to find common coding issues. For example, it can analyze your source code and detect unreachable code which is displayed as dimmed in the editor. If you hover over the line of source code, you'll see a hover explaining and if you place your cursor on the line, you'll get a Quick Fix lightbulb.

Clicking on the lightbulb or pressing ⌘. (Windows, Linux Ctrl+.) brings up the Quick Fix menu where you can select the Remove unreachable code fix.

VS Code has built-in support for TypeScript debugging. To support debugging TypeScript in combination with the executing JavaScript code, VS Code relies on source maps for the debugger to map between the original TypeScript source code and the running JavaScript. You can create source maps during the build by setting "sourceMap": true in your tsconfig.json.

With helloworld.ts open in the editor, press F5. If you have other debugger extensions installed, you need to select Node.js from the dropdown.

The debugger will start a session, run your code, and display the "Hello World" message in the Debug console panel.

In helloworld.ts, set a breakpoint by clicking on the left gutter of the editor. You will see a red circle if the breakpoint is set. Press F5 again. Execution will stop when the breakpoint is hit and you'll be able to see debugging information such as variable values and the call stack in the Run view (⇧⌘D (Windows, Linux Ctrl+Shift+D)). 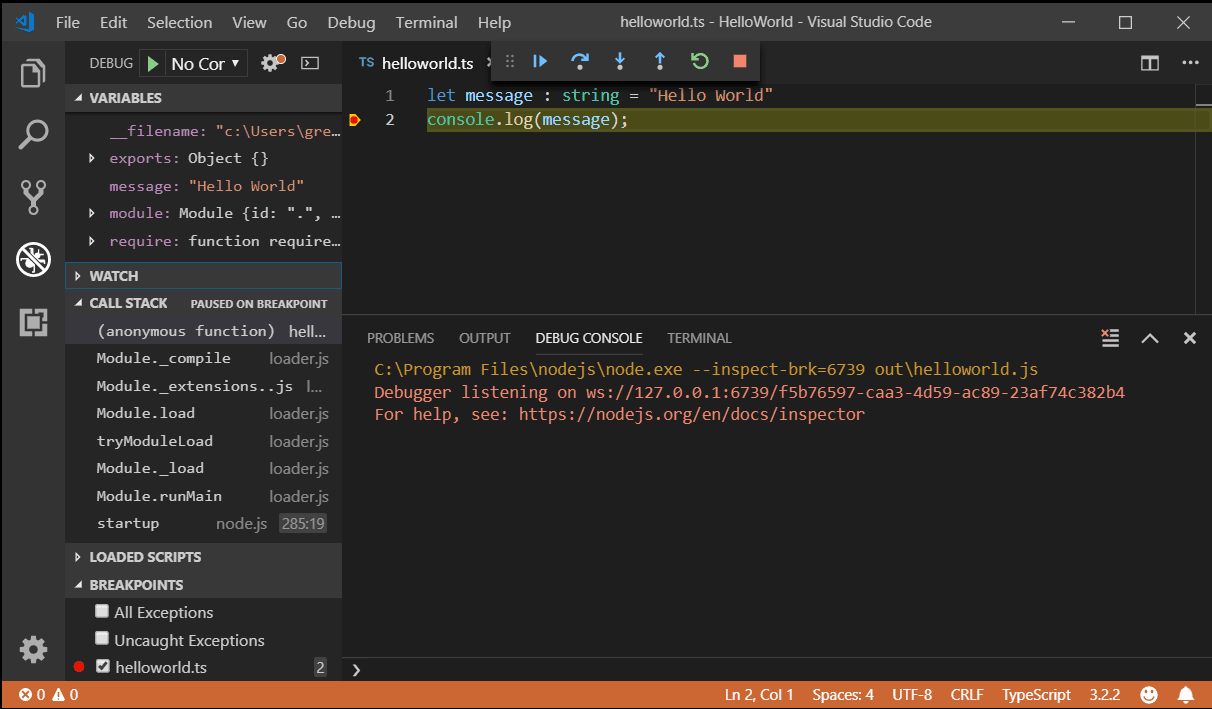 See Debugging TypeScript to learn more about VS Code's built-in debugging support for TypeScript and how you can configure the debugger for your project scenarios.

You've likely not set "sourceMap": true in your tsconfig.json and the VS Code Node.js debugger can't map your TypeScript source code to the running JavaScript. Turn on source maps and rebuild your project.