Visual Studio Code includes a full featured integrated terminal that conveniently starts at the root of your workspace. It provides integration with the editor to support features like links and error detection.

To open the terminal: 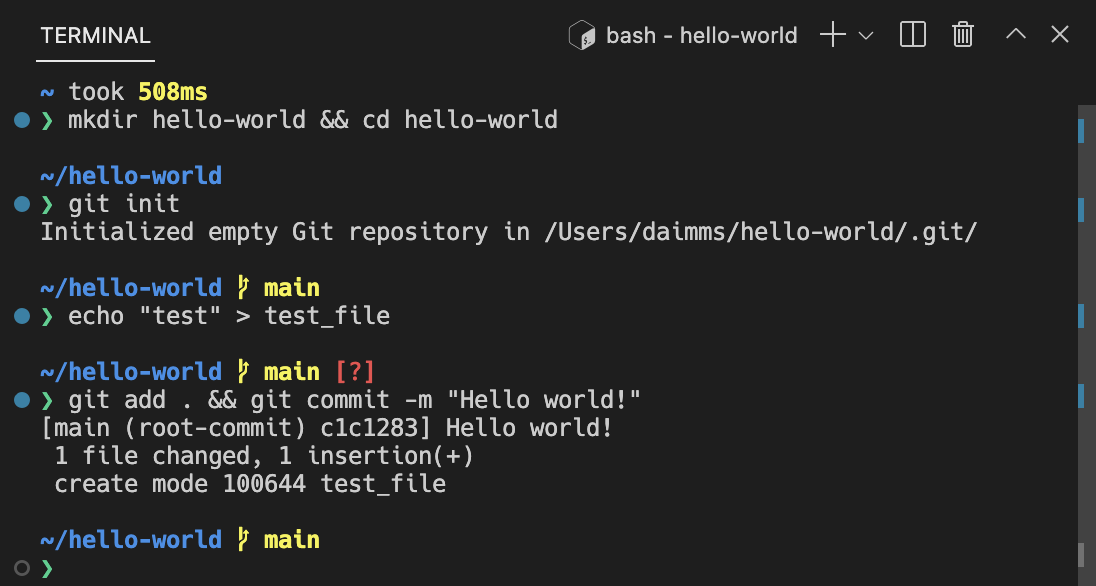 Note: Open an external terminal with the ⇧⌘C (Windows, Linux Ctrl+Shift+C) keyboard shortcut if you prefer to work outside VS Code.

The integrated terminal can use various shells installed on your machine, with the default being pulled from your system defaults. Shells are detected and presented in the terminal profiles dropdown. 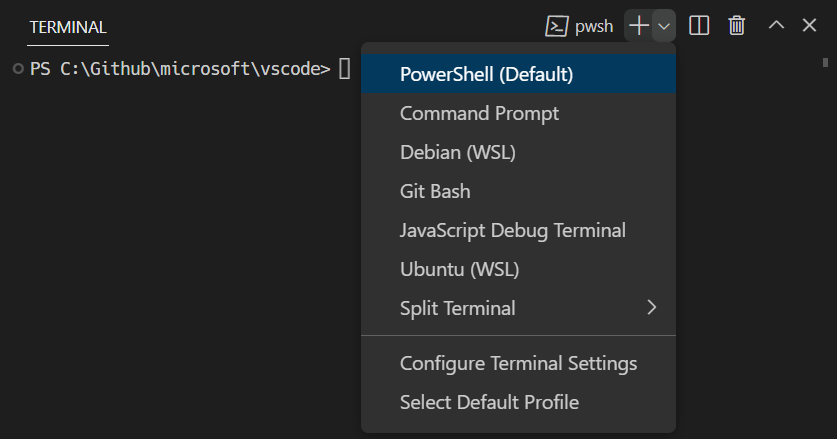 You can learn more about configuring terminal shells in the terminal profiles article.

The terminal tabs UI is on the right side of the terminal view. Each terminal has an entry with its name, icon, color, and group decoration (if any).

Terminal instances can be added by selecting the + icon on the top-right of the TERMINAL panel, selecting a profile from the terminal dropdown, or by triggering the ⌃⇧` (Windows, Linux Ctrl+Shift+`) command. This action creates another entry in the tab list associated with that terminal.

Remove terminal instances by hovering a tab and selecting the Trash Can button, selecting a tab item and pressing Delete, using Terminal: Kill the Active Terminal Instance command, or via the right-click context menu.

Icons may appear to the right of the terminal title on the tab label when a terminal's status changes. Some examples are a bell (macOS) and for tasks, displaying a check mark when there are no errors and an X otherwise. Hover the icon to read status information, which may contain actions.

Multiple terminals can be placed side-by-side are called a group and are created by splitting a terminal:

Tip: The working directory for the new terminal depends on the terminal.integrated.splitCwd setting.

Dragging and dropping tabs in the list will rearrange them. Dragging a tab into the main terminal area allows moving a terminal from one group to another.

Moving a terminal into its own group can be done with the Terminal: Unsplit Terminal command through the Command Palette or in the right-click context menu.

Terminal editors are ideal if you want a complex workbench layout such as terminals on either side of an editor or terminals arranged in two dimensions. Below PowerShell and WSL terminals are stacked in an editor group to the right of a group of file editors. 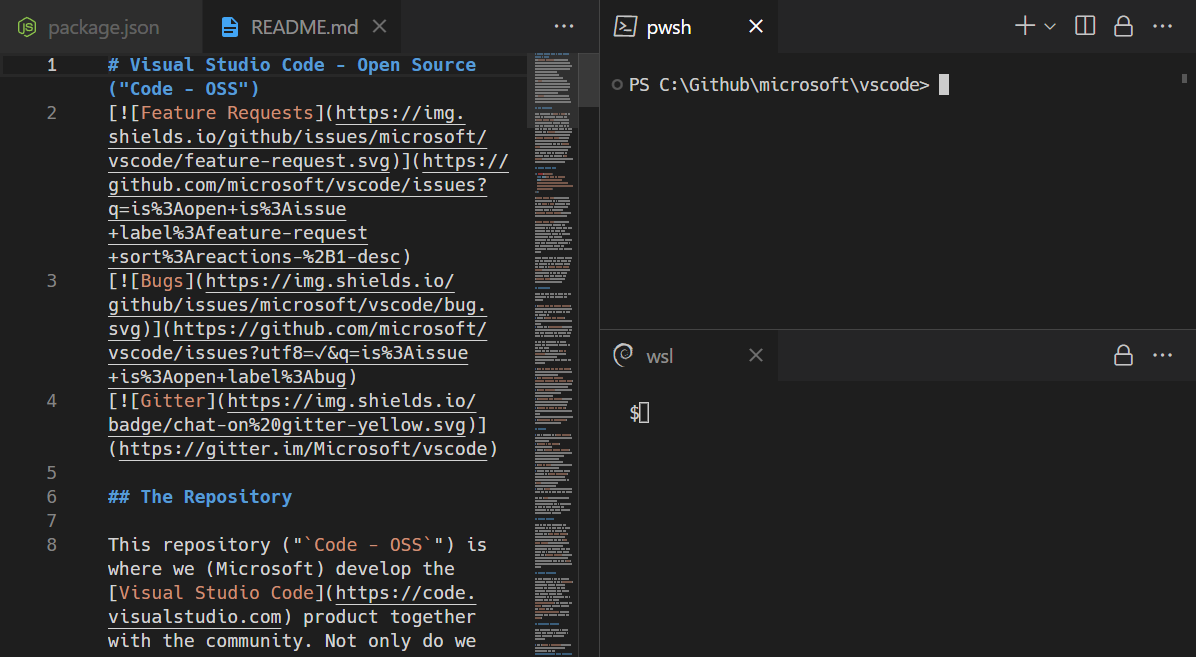 The terminal.integrated.defaultLocation setting can change the default terminal location to be in either the view or editor areas.

The content in the terminal is called the buffer, with the section right above the bottom viewport being called "scrollback". The amount of scrollback kept is determined by the terminal.integrated.scrollback setting and defaults to 1000 lines.

There are various commands available to navigate around the terminal buffer:

Scrolling will happen instantaneously, but can be configured to animate over a short duration with the terminal.integrated.smoothScrolling setting.

The terminal features sophisticated link detection with editor integration and even extension contributed link handlers. Links are activated by mousing over the link so an underline appears, then hold Ctrl/Cmd and click.

There are several built-in link handlers that are used in the following priority order:

Extensions can contribute link providers which allow the extension to define what happens when clicked. An example of this is the GitLens extension detecting Git branch links.

Links are keyboard accessible through several commands that open links based on the type of link. These commands do not have default keyboard shortcuts.

The keybindings for copy and paste follow platform standards:

Copying is done automatically on selection when terminal.integrated.copyOnSelection is enabled.

By default there is a warning when pasting multiple lines, which can be disabled with the terminal.integrated.enableMultiLinePasteWarning setting. This is only done when the shell does not support "bracketed paste mode". When that mode is enabled, the shell is indicating that it can handle multiple line pasting.

The right-click behavior differs based on the platform:

This can be configured using the terminal.integrated.rightClickBehavior setting. The options are:

Reposition the cursor with Alt

Alt and left-click will reposition the cursor to underneath the mouse. This works by simulating arrow keystrokes, which may not work reliably for some shells or programs. This feature can be disabled with the terminal.integrated.altClickMovesCursor setting.

When applications running in the terminal turn on mouse events mode, such as Vim mouse mode, mouse interaction is sent to the application instead of the terminal. This means that clicking and dragging will no longer create a selection. Terminal selection can be forced by holding the Alt key on Windows and Linux, this can also be done with the Option key on macOS but requires enabling the terminal.integrated.macOptionClickForcesSelection setting first.

The integrated terminal has find functionality that can be triggered with ⌘F (Windows, Linux Ctrl+F). 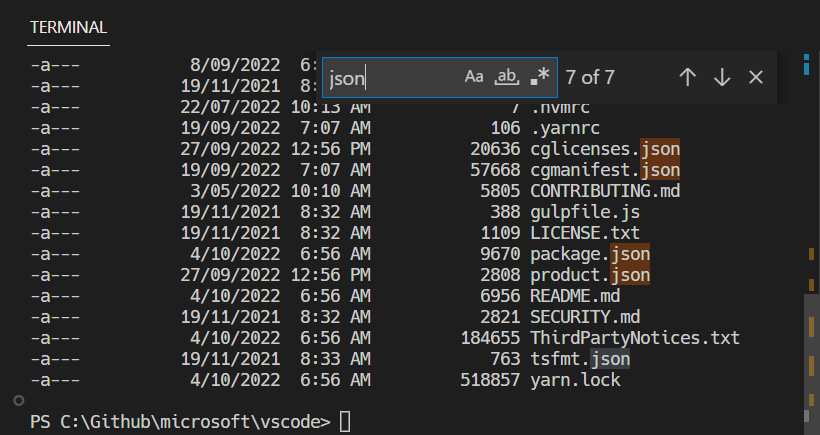 Tip: Ctrl+F can be sent to the shell by removing the workbench.action.terminal.focusFind command from commands to skip shell.

To use the runSelectedText command, select text in an editor and run the command Terminal: Run Selected Text in Active Terminal via the Command Palette (⇧⌘P (Windows, Linux Ctrl+Shift+P)), the terminal will attempt to run the selected text. If no text is selected in the active editor, the entire line that the cursor is on will run in the terminal.

The terminal view can be maximized by clicking the maximize panel size button with the upwards chevron icon. This will temporarily hide the editors and maximize the panel. This is useful to temporarily focus on a large amount of output. Some developers use VS Code as a standalone terminal by opening a new window, maximizing the panel, and hiding the side bar.

There is a Terminal: Select All command, which is bound to Cmd+A on macOS, but does not have a default keybinding on Windows and Linux as it may conflict with shell hotkeys. To use Ctrl+A to select all, add this custom keybinding:

The Tasks feature can be used to automate the launching of terminals, for example, the following .vscode/tasks.json file will launch a Command Prompt and PowerShell terminal in a single terminal group when the window starts:

This file could be committed to the repository to share with other developers or created as a user task via the workbench.action.tasks.openUserTasks command.

By default, the terminal will open at the folder that is opened in the Explorer. The terminal.integrated.cwd setting allows specifying a custom path to open instead:

There are also extensions available that give more options such as Terminal Here.

The Terminal: Set Fixed Dimensions command allows changing the number of columns and rows that the terminal and it's backing psuedoterminal uses. This will add scroll bars when necessary, which may lead to an unpleasant UX and is generally not recommended, but it is a common ask on Windows in particular for reading logs or long lines when paging tools aren't available.

You can also right-click on a terminal tab and select Toggle Size to Content Width (⌥Z (Windows, Linux Alt+Z)) to resize the number of terminal columns to the largest wrapped line in the terminal.

The basics of the terminal have been covered in this document. Read on to find out more about:

I'm having problems launching the terminal

There's a dedicated troubleshooting guide for these sorts of problems.

Why is nvm complaining about a prefix option when the integrated terminal is launched?

This is mostly a macOS problem and does not happen in external terminals. The typical reasons for this are the following:

To resolve this issue, you need to track down where the old npm is installed and remove both it and its out-of-date node_modules. Find the nvm initialization script and run which npm before it runs, which should print the path when you launch a new terminal.

Once you have the path to npm, find the old node_modules by resolving the symlink by running a command something like this:

This will give you the resolved path at the end:

From there, removing the files and relaunching VS Code should fix the issue:

Why does macOS make a ding sound when I resize terminal split panes?

The keybindings ⌃⌘← and ⌃⌘→ are the defaults for resizing individual split panes in the terminal. While they work, they also cause a system "invalid key" sound to play due to an issue in Chromium. The recommended workaround is to tell macOS to no-op for these keybindings by running this in your terminal:

I'm having problems with the terminal rendering. What can I do?

By default, the integrated terminal will render using GPU acceleration on most machines. Typically when there are rendering problems it's an issue of something in your hardware/OS/drivers not playing nicely with the GPU renderer. The first thing to try is to disable GPU acceleration, trading off rendering speed for DOM-based rendering, which is more reliable:

This normally means that the program/shell running inside the terminal requested to turn on "bracketed paste mode" but something doesn't support it properly. To work around this, you could run printf "\e[?2004l" to disable it for that session or add the following to your ~/.inputrc file:

This can happen if zsh is in Vim mode instead of Emacs mode, due to setting $EDITOR or $VISUAL to vi/vim in your init scripts.

To work around this, you have two options:

How can I configure Cmd+. to map to Ctrl+C like macOS' built-in terminal?

The macOS default terminal uses Cmd+. to perform the same as Ctrl+C. To get this behavior in VS Code, add this custom keybinding:

Why are the colors in the terminal not correct?

One of our accessibility features we enable by default is to ensure a minimum contrast ratio of at least 4.5 is met for the foreground text. This feature ensures that text is readable regardless of the shell and theme used which is not possible otherwise. To disable this feature, you can set: