TypeScript is a typed superset of JavaScript that compiles to plain JavaScript. It offers classes, modules, and interfaces to help you build robust components. 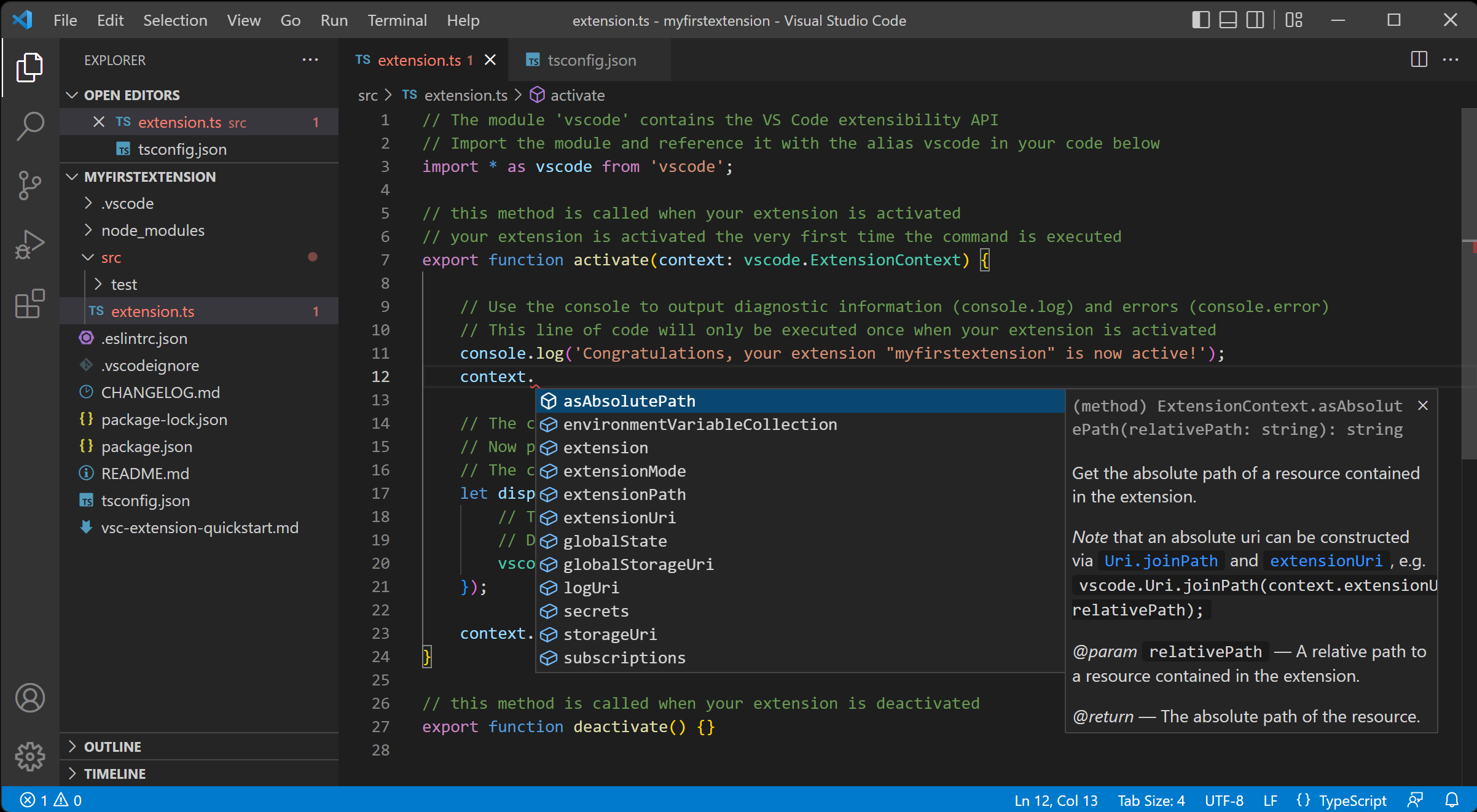 Another option is to install the TypeScript compiler locally in your project (npm install --save-dev typescript) and has the benefit of avoiding possible interactions with other TypeScript projects you may have.

IntelliSense shows you intelligent code completion, hover information, and signature help so that you can write code more quickly and correctly.

Hover over a TypeScript symbol to quickly see its type information and relevant documentation:

You can also show the hover information at the current cursor position with the ⌘K ⌘I (Windows, Linux Ctrl+K Ctrl+I) keyboard shortcut.

As you write a TypeScript function call, VS Code shows information about the function signature and highlights the parameter that you are currently completing:

Signature help is shown automatically when you type a ( or , within a function call. Use ⇧⌘Space (Windows, Linux Ctrl+Shift+Space) to manually trigger signature help.

In addition to smart code completions, VS Code also includes basic TypeScript snippets that are suggested as you type.

You can install extensions to get additional snippets or define your own snippets for TypeScript. See User Defined Snippets for more information.

Tip: You can disable snippets by setting editor.snippetSuggestions to "none" in your settings file. If you'd like to see snippets, you can specify the order relative to suggestions; at the top ("top"), at the bottom ("bottom"), or inlined ordered alphabetically ("inline"). The default is "inline".

The TypeScript language service will analyze your program for coding problems and report errors and warnings:

To loop through errors or warnings in the current file, you can press F8 or ⇧F8 (Windows, Linux Shift+F8) which will show an inline zone detailing the problem and possible Code Actions (if available):

You can navigate via symbol search using the Go to Symbol commands from the Command Palette (⇧⌘P (Windows, Linux Ctrl+Shift+P)).

For more specialized code formatting styles, try installing one of the formatting extensions from the VS Code Marketplace.

VS Code includes some handy refactorings for TypeScript such as Extract function and Extract constant. Just select the source code you'd like to extract and then click on the light bulb in the gutter or press (⌘. (Windows, Linux Ctrl+.)) to see available refactorings.

See Refactoring TypeScript for more information about refactorings and how you can configure keyboard shortcuts for individual refactorings.

One of the simplest refactorings is to rename a method or variable. Press F2 to rename the symbol under the cursor across your TypeScript project:

VS Code comes with great debugging support for TypeScript, including support for sourcemaps. Set breakpoints, inspect objects, navigate the call stack, and execute code in the Debug Console. See Debugging TypeScript and the overall Debugging topic to learn more.

You can debug your client-side code using a browser debugger such as the built-in Edge and Chrome debugger, or the Debugger for Firefox.

Debug Node.js in VS Code using the built-in debugger. Setup is easy and there is a Node.js debugging tutorial to help you.

ESLint is a popular linter, which also supports TypeScript. The ESLint extension integrates ESLint into VS Code so you can see linting errors right in the editor and even quickly fix many of them with Quick Fixes. The ESLint plugin guide details how to configure ESLint for your TypeScript projects.

VS Code provides many features for TypeScript out of the box. In addition to what comes built-in, you can install an extension for greater functionality.

Can I use the version of TypeScript that ships with VS 2022?

No, the TypeScript language service that ships with Visual Studio 2019 and 2022 isn't compatible with VS Code. You will need to install a separate version of TypeScript from npm.

How can I use the latest TypeScript beta with VS Code?

The simplest way to try out the latest TypeScript features in VS Code is to install the JavaScript and TypeScript Nightly extension.

You can also configure VS Code to use a specific TypeScript version.