Welcome, Brackets users! Learn about migrating to VS Code

This documentation describes the legacy Tasks system in Visual Studio Code version 1.13 and earlier. If you want to learn about the latest Tasks 2.0, please refer to the Tasks topic.

Developers use lots of tools, mostly run from the command line, to automate jobs outside the inner software development loop (edit, compile, test and debug). Given their importance in the development life-cycle, it is very helpful to be able to run them and analyze their results from within Visual Studio Code.

Let's start with a simple "Hello World" task which will display text to the OUTPUT panel when run.

Create an empty folder "mytask" and start VS Code from that folder.

Tasks are defined in a workspace tasks.json file and VS Code has templates for common task runners. In the Command Palette (⇧⌘P (Windows, Linux Ctrl+Shift+P)), you can filter on 'task' and can see the various Task related commands.

Select the Tasks: Configure Task Runner command and you will see a list of task runner templates. Select Others to create a task which runs an external command.

Note: If you don't see the list of task runner templates, you may already have a tasks.json file in your folder and its contents will be open in the editor. Close the file and either delete or rename it for this example.

You should now see a tasks.json file in your workspace .vscode folder with the following content:

In this example, we are just running the echo shell command with "Hello World" as an argument.

Test the echo task by running Tasks: Run Task and selecting echo from the drop-down list. The OUTPUT panel will open and you'll see the text "Hello World".

You can get IntelliSense on tasks.json variables and their values with hover and trigger smart completions with ⌃Space (Windows, Linux Ctrl+Space). 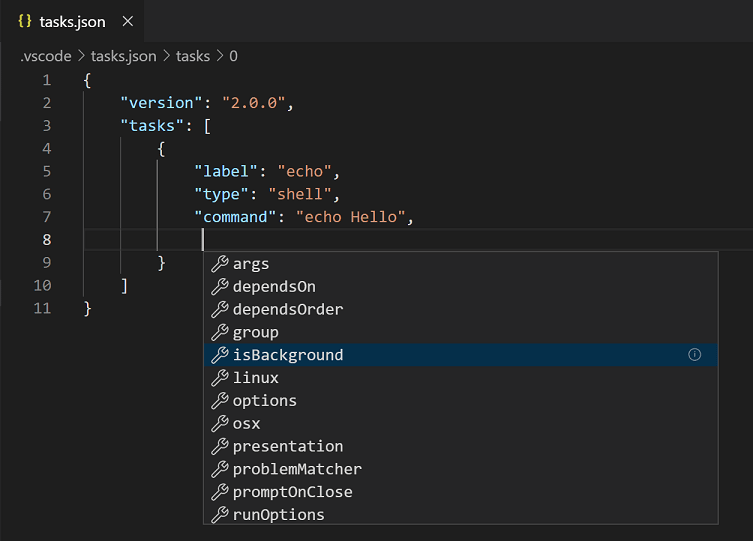 Tip: You can run your task through Quick Open (⌘P (Windows, Linux Ctrl+P)) by typing 'task', Space and the command name. In this case, 'task echo'.

Sometimes you will want to control how the output window behaves when running tasks. For instance, you may want to maximize editor space and only look at task output if you think there is a problem. The property showOutput controls this and the valid values are:

To see the exact command VS Code is running, you can enable the echoCommand setting in tasks.json: 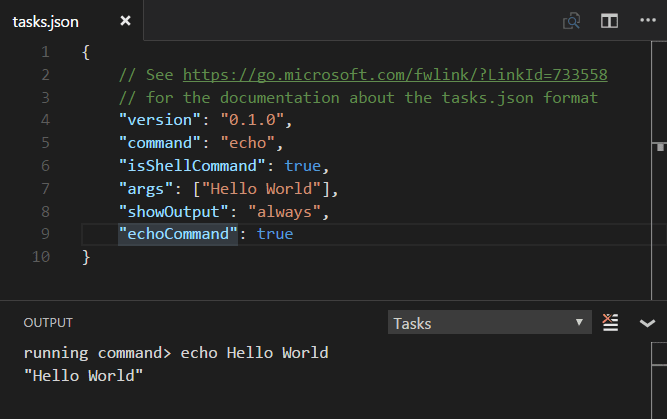 Note: VS Code ships with predefined tasks.json templates to run npm, MSBuild, Maven and other command-line tools. A great way to learn about tasks is to review these templates and see which tools or task runners are similar to other tools you may be using.

tasks.json takes a single command value which can be a task runner like gulp or grunt or any command-line tool like a compiler or linter. By default, the command will show up in the Tasks: Run Task drop-down list.

You can also define multiple tasks in a tasks array in order to pass different arguments or use different settings when the command is run.

Now when you run Tasks: Run Task, you will now see two tasks in the drop-down list, hello and bye. We set suppressTaskName to true as by default the task name is also passed to the command which would result in "echo hello Hello World". 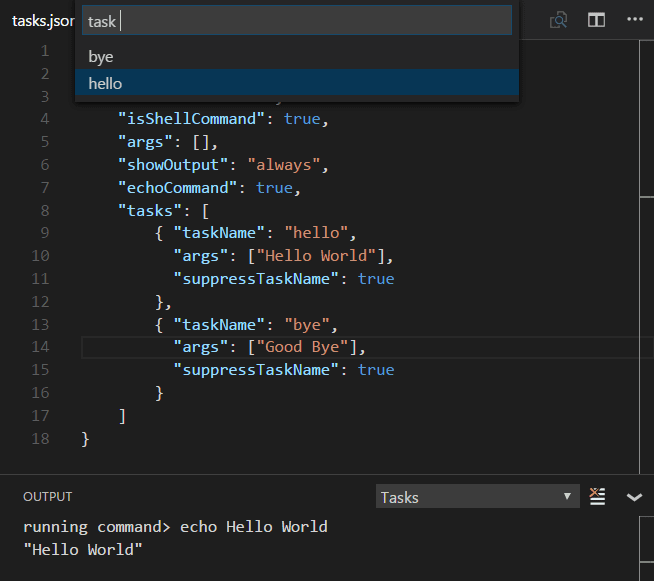 Some tasks.json properties such as showOutput and suppressTaskName can be set both globally and then overridden in specific tasks. The tasks args property values are appended to the global arguments. The final command line is constructed as follows:

There are also tasks specific properties. One useful property is isBuildCommand, which if set to true, will run the task with the Tasks: Run Build Task (⇧⌘B (Windows, Linux Ctrl+Shift+B)) command.

If you need to run a task frequently, you can also define a keyboard shortcut for the task.

For example, to bind Ctrl+H to the build task from above, add the following to your keybindings.json file:

When authoring tasks configurations, it is useful to have a set of predefined common variables such as the active file (${file}) or workspace root folder (${workspaceFolder}). VS Code supports variable substitution inside strings in the tasks.json file and you can see a full list of predefined variables in the Variables Reference.

Below is an example of a configuration that passes the current opened file to the TypeScript compiler.

The task system supports defining values (for example, the command to be executed) specific to an operating system. To do so, put an operating system specific literal into the tasks.json file and specify the corresponding properties inside that literal.

Below is an example that uses the Node.js executable as a command and is treated differently on Windows and Linux:

In the example below:

Output from the executed task is never brought to front except for Windows where it is always shown.

Tasks local commands can be made operating specific as well. The syntax is the same as for global commands. Here an example that adds an OS specific argument to a command:

Examples of Tasks in Action

To highlight the power of Tasks, here are a few examples of how VS Code can use Tasks to integrate external tools like linters and compilers.

The TypeScript topic includes an example that creates a task to transpile TypeScript to JavaScript and observe any related errors from within VS Code.

Transpiling Less and SCSS into CSS

The CSS topic provides examples of how to use Tasks to generate CSS files.

VS Code can autodetect tasks from within Gulp, Grunt and Jake files. This adds their tasks to the task list without requiring additional configuration (unless you need to use a problem matcher, more on that in a moment).

Pressing ⇧⌘P (Windows, Linux Ctrl+Shift+P) and then typing Run Task followed by Enter will list all available tasks. Selecting one and pressing Enter will execute the task.

Note: Gulp, Grunt and Jake are autodetected only if the corresponding files (for example gulpfile.js) are present in the root of the opened folder.

VS Code can process the output from a task with a problem matcher and we ship with a number of them 'in the box':

Problem matchers scan the task output text for known warning or error strings and report these inline in the editor and in the Problems panel. Problem matchers can be set globally or in a specific task entry.

You can also create your own problem matcher which we'll talk about soon.

You need to configure the tasks in a tasks.json file (located under your workspace .vscode folder) if you want to do more than just run the task. For example, you might want to match reported problems and highlight them within VS Code, or to trigger a build task using the Tasks: Run Build Task command (⇧⌘B (Windows, Linux Ctrl+Shift+B)).

If you don't already have a tasks.json under your workspace .vscode folder, running the Tasks: Configure Task Runner action from the Command Palette (⇧⌘P (Windows, Linux Ctrl+Shift+P)) will offer you a set of templates to pick from.

Since we execute the Mono compiler to compile C# files, we should use the $msCompile problem matcher to detect any problems reported by the compiler.

The problemMatcher property will then be:

Several things to note about this tasks.json:

VS Code ships some of the most common problem matchers out of the box. However, there are lots of compilers and linting tools out there, all of which produce their own style of errors and warnings. So let's talk about how to make your own problem matcher.

We have a helloWorld.c program in which the developer mistyped printf as prinft. Compiling it with gcc will produce the following warning:

Tip: We have found the RegEx101 playground a really good way to develop and test regular expressions.

A matcher that captures the above warning (and errors) looks like:

Please note that the file, line and message properties are mandatory.

Here is a finished tasks.json file with the code above (comments removed) wrapped with the actual task details:

Running it inside VS Code and pressing ⇧⌘M (Windows, Linux Ctrl+Shift+M) to get the list of problems gives you the following output:

There are a couple more properties that can be used inside a pattern. These are:

Note: A functional pattern must at least provide a match group for file, message and line or location.

Some tools spread problems found in a source file over several lines, especially if stylish reporters are used. An example is ESLint; in stylish mode it produces output like this:

Our problem matcher is line-based so we need to capture the file name (test.js) with a different regular expression than the actual problem location and message (1:0 error Missing "use strict" statement).

To do this we use an array of problem patterns for the pattern property. This way you define a pattern per each line you want to match.

The following problem pattern matches the output from ESLint in stylish mode - but still has one small issue which we will resolve next. The code below has a first regular expression to capture the file name and the second to capture the line, column, severity, message and error code:

Of course it's never quite that simple, and this pattern will not work if there is more than one problem on a resource. For instance, imagine the following output from ESLint:

Some tools support running in the background while watching the file system for changes and then triggering an action when a file changes on disk. With Gulp such functionality is provided through the npm module gulp-watch. The TypeScript compiler tsc has built in support for this via the --watch command line option.

When a file changes on disk which contains a problem, the following output appears:

Looking at the output shows the following pattern:

To capture this information, a problem matcher can provide a watching property.

In addition to the watching property on the problem matcher, the task itself has to be marked as isBackground so that the task keeps running in the background.

A full handcrafted tasks.json for a tsc task running in watch mode looks like this: