To start, we'd like to say we're sorry that you're here reading this document instead of having a good time using the Integrated Terminal in Visual Studio Code. The VS Code team works hard to make the terminal experience as seamless as possible but in some cases, there are issues with shell or terminal configurations that the VS Code editor can't work around.

After having worked with hundreds of developers to diagnose their terminal launch failures, the VS Code team has put together this topic with the advice and troubleshooting tips that have helped people in the past. We hope you'll find an answer here for your shell or terminal issue and can get quickly back to work.

Note: If you're on Windows, you may want to review the common issues on Windows section first.

If none of these steps helped solve the issue, you can also try:

Make sure compatibility mode is disabled

This can happen if Windows Subsystem for Linux (WSL) is not set up with a valid default Linux distribution.

Note: 'docker-desktop-data' is not a valid distribution.

The terminal not working when running the 32-bit Windows client on 64-bit Windows?

The easy fix for this issue is to use the 64-bit version. If you must use the 32-bit version, you need to use the sysnative path when configuring your shell path instead of System32. Adding this setting should fix the issue:

Typically this error occurs due to anti-virus software intercepting and blocking the winpty/conpty components from creating the terminal process. To work around this error, you can exclude the following file from your anti-virus scanning:

Reporting this issue to the Anti-virus team can also help stamp out the issue all together.

Exit code 259 can mean STILL_ACTIVE when the terminal is trying to start a new process such as PowerShell.exe. You can try killing unused programs and processes on your machine in case one of them is keeping a terminal shell process active and unable to relaunch.

Anti-virus software running on your machine may also interfere with starting your terminal shell.

This can happen when you have legacy console mode enabled in conhost's properties. To change this, open cmd.exe from the start menu, right-click the title bar, go to Properties and under the Options tab, uncheck Use legacy console. 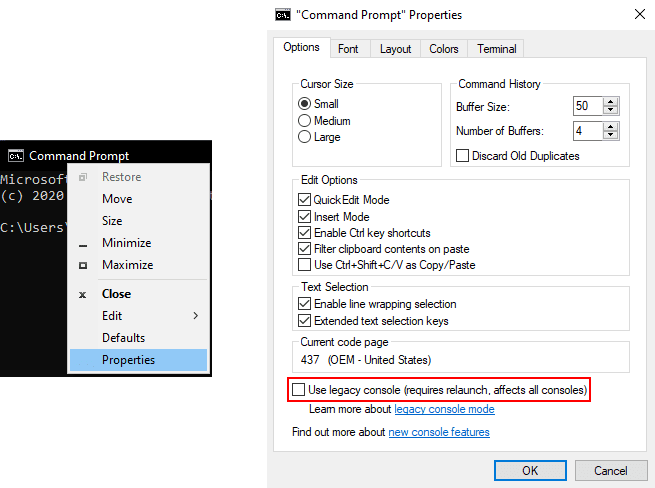