Version 1.51 is now available! Read about the new features and fixes from October.

Visual Studio Code lets you perform most tasks directly from the keyboard. This page lists out the default bindings (keyboard shortcuts) and describes how you can update them.

Keyboard shortcuts are vital to productivity and changing keyboarding habits can be tough. To help with this, File > Preferences > Keymap Extensions shows you a list of popular keymap extensions. These extensions modify the VS Code shortcuts to match those of other editors so you don't need to learn new keyboard shortcuts. There is also a Keymaps category of extensions in the Marketplace.

We also have a printable version of these keyboard shortcuts. Help > Keyboard Shortcut Reference displays a condensed PDF version suitable for printing as an easy reference.

Below are links to the three platform-specific versions (US English keyboard):

If you have many extensions installed or you have customized your keyboard shortcuts, you can sometimes have keybinding conflicts where the same keyboard shortcut is mapped to several commands. This can result in confusing behavior, especially if different keybindings are going in and out of scope as you move around the editor.

The Keyboard Shortcuts editor has a context menu command Show Same Keybindings, which will filter the keybindings based on a keyboard shortcut to display conflicts.

Pick a command with the keybinding you think is overloaded and you can see if multiple commands are defined, the source of the keybindings and when they are active.

To troubleshoot keybindings problems, you can execute the command Developer: Toggle Keyboard Shortcuts Troubleshooting. This will activate logging of dispatched keyboard shortcuts and will open an output panel with the corresponding log file.

You can then press your desired keybinding and check what keyboard shortcut VS Code detects and what command is invoked.

For example, when pressing cmd+/ in a code editor on macOS, the logging output would be:

The first keydown event is for the MetaLeft key (cmd) and cannot be dispatched. The second keydown event is for the Slash key (/) and is dispatched as meta+[Slash]. There were two keybinding entries mapped from meta+[Slash] and the one that matched was for the command editor.action.commentLine, which has the when condition editorTextFocus && !editorReadonly and is a built-in keybinding entry.

All keyboard shortcuts in VS Code can be customized via the keybindings.json file.

You can also open the keybindings.json file from the Command Palette (⇧⌘P (Windows, Linux Ctrl+Shift+P)) with the Preferences: Open Keyboard Shortcuts (JSON) command.

Each rule consists of:

Chords (two separate keypress actions) are described by separating the two keypresses with a space. For example, Ctrl+K Ctrl+C.

When a key is pressed:

The keyboard shortcuts dispatching is done by analyzing a list of rules that are expressed in JSON. Here are some examples:

The key is made up of modifiers and the key itself.

The following modifiers are accepted:

The following keys are accepted:

You can invoke a command with arguments. This is useful if you often perform the same operation on a specific file or folder. You can add a custom keyboard shortcut to do exactly what you want.

The following is an example overriding the Enter key to print some text:

The type command will receive {"text": "Hello World"} as its first argument and add "Hello World" to the file instead of producing the default command.

For more information on commands that take arguments, refer to Built-in Commands.

You can write a key binding rule that targets the removal of a specific default key binding. With the keybindings.json, it was always possible to redefine all the key bindings of VS Code, but it can be difficult to make a small tweak, especially around overloaded keys, such as Tab or Escape. To remove a specific key binding, add a - to the command and the rule will be a removal rule.

Note: This section relates only to key bindings, not to typing in the editor.

The keys above are string representations for virtual keys and do not necessarily relate to the produced character when they are pressed. More precisely:

All the key bindings are rendered in the UI using the current system's keyboard layout. For example, Split Editor when using a French (France) keyboard layout is now rendered as Ctrl+*: 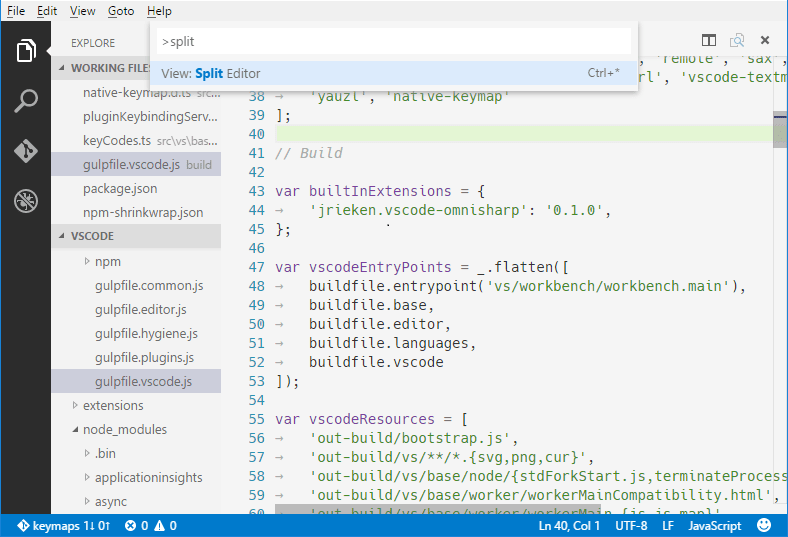 When editing keybindings.json, VS Code highlights misleading key bindings, those that are represented in the file with the character produced under the standard US keyboard layout, but that need pressing keys with different labels under the current system's keyboard layout. For example, here is how the Default Keyboard Shortcuts rules look like when using a French (France) keyboard layout:

There is also a widget that helps input the key binding rule when editing keybindings.json. To launch the Define Keybinding widget, press ⌘K ⌘K (Windows, Linux Ctrl+K Ctrl+K). The widget listens for key presses and renders the serialized JSON representation in the text box and below it, the keys that VS Code has detected under your current keyboard layout. Once you've typed the key combination you want, you can press Enter and a rule snippet will be inserted.

Note: On Linux, Visual Studio Code detects your current keyboard layout on start-up and then caches this information. For a good experience, we recommend restarting VS Code if you change your keyboard layout.

Using scan codes, it is possible to define keybindings which do not change with the change of the keyboard layout. For example:

Below are some of the available when clause contexts, which evaluate to Boolean true/false.

Note: You can use any user or workspace setting that evaluates to a boolean here with the prefix "config.".

You can have a keybinding that is enabled only when a specific view or panel is visible.

If you want a keybinding that is enabled only when a specific view or panel has focus, use sideBarFocus or panelFocus in combination with activeViewlet or activiewFocus.

For example, the when clause below is true only when the File Explorer has focus:

There is a key-value pair operator for when clauses. The expression key =~ value treats the right hand side as a regular expression to match against the left hand side. For example, to contribute context menu items for all Docker files, one could use:

This is covered in depth in the Refactoring topic where you can learn about different kinds of Code Actions and how to prioritize them in the case of multiple possible refactorings.

You can view the default keyboard shortcuts as a JSON file using the command Preferences: Open Default Keyboard Shortcuts (JSON).

Some commands included below do not have default keyboard shortcuts and so are displayed as unassigned but you can assign your own keybindings.

Now that you know about our Key binding support, what's next...

How can I find out what command is bound to a specific key?

In the Keyboard Shortcut editor, you can filter on specific keystrokes to see which commands are bound to which keys. Below you can see that Ctrl+Shift+P is bound to Show All Commands to bring up the Command Palette.

How to add a key binding to an action, for example, add Ctrl+D to Delete Lines

Find a rule that triggers the action in the Default Keyboard Shortcuts and write a modified version of it in your keybindings.json file:

How can I add a key binding for only certain file types?

Use the editorLangId context key in your when clause:

I have modified my key bindings in keybindings.json; why don't they work?

The most common problem is a syntax error in the file. Otherwise, try removing the when clause or picking a different key. Unfortunately, at this point, it is a trial and error process.