Syntax highlighting determines the color and style of source code displayed in the Visual Studio Code editor. It is responsible for colorizing keywords like if or for in JavaScript differently than strings and comments and variable names.

There are two components to syntax highlighting:

Before diving into the details, a good start is to play with the scope inspector tool and explore what tokens are present in a source file and what theme rules they match to. To see both semantic and syntax token, use a built-in theme (for example, Dark+) on a TypeScript file.

The tokenization of text is about breaking the text into segments and to classify each segment with a token type.

The TextMate tokenization engine runs in the same process as the renderer and tokens are updated as the user types. Tokens are used for syntax highlighting, but also to classify the source code into areas of comments, strings, regex.

Starting with release 1.43, VS Code also allows extensions to provide tokenization through a Semantic Token Provider. Semantic providers are typically implemented by language servers that have a deeper understanding of the source file and can resolve symbols in the context of the project. For example, a constant variable name can be rendered using constant highlighting throughout the project, not just at the place of its declaration.

This article focuses on the TextMate-based tokenization. Semantic tokenization and theming are explained in the Semantic Highlighting guide.

VS Code uses TextMate grammars as the syntax tokenization engine. Invented for the TextMate editor, they have been adopted by many other editors and IDEs due to large number of language bundles created and maintained by the Open Source community.

Tokens are one or more characters that are part of the same program element. Example tokens include operators such as + and *, variable names such as myVar, or strings such as "my string".

Each token is associated with a scope that defines the context of the token. A scope is a dot separated list of identifiers that specify the context of the current token. The + operation in JavaScript, for example, has the scope keyword.operator.arithmetic.js.

Themes map scopes to colors and styles to provide syntax highlighting. TextMate provides list of common scopes that many themes target. In order to have your grammar as broadly supported as possible, try to build on existing scopes rather than defining new ones.

Scopes nest so that each token is also associated with a list of parent scopes. The example below uses the scope inspector to show the scope hierarchy for the + operator in a simple JavaScript function. The most specific scope is listed at the top, with more general parent scopes listed below:

Parent scope information is also used for theming. When a theme targets a scope, all tokens with that parent scope will be colorized unless the theme also provides a more specific colorization for their individual scopes.

VS Code supports json TextMate grammars. These are contributed through the grammars contribution point.

The grammar file itself consists of a top-level rule. This is typically split into a patterns section that lists the top-level elements of the program and a repository that defines each of the elements. Other rules in the grammar can reference elements from the repository using { "include": "#id" }.

The example abc grammar marks the letters a, b, and c as keywords, and nestings of parens as expressions.

The grammar engine will try to successively apply the expression rule to all text in the document. For a simple program such as:

The example grammar produces the following scopes (listed left-to-right from most specific to least specific scope):

Note that text that is not matched by one of the rules, such as the string xyz, is included in the current scope. The last parenthesis at the end of the file is part of the expression.group even if the end rule is not matched, as end-of-document was found before the end rule was.

The embeddedLanguages contribution point maps a scope in the embedded language to a top-level language scope. In the example below, any tokens in the meta.embedded.block.javascript scope will be treated as JavaScript content:

Now if you try to comment code or trigger snippets inside a set of tokens marked meta.embedded.block.javascript, they will get the correct // JavaScript style comment and the correct JavaScript snippets.

To quickly create a new grammar extension, use VS Code's Yeoman templates to run yo code and select the New Language option: 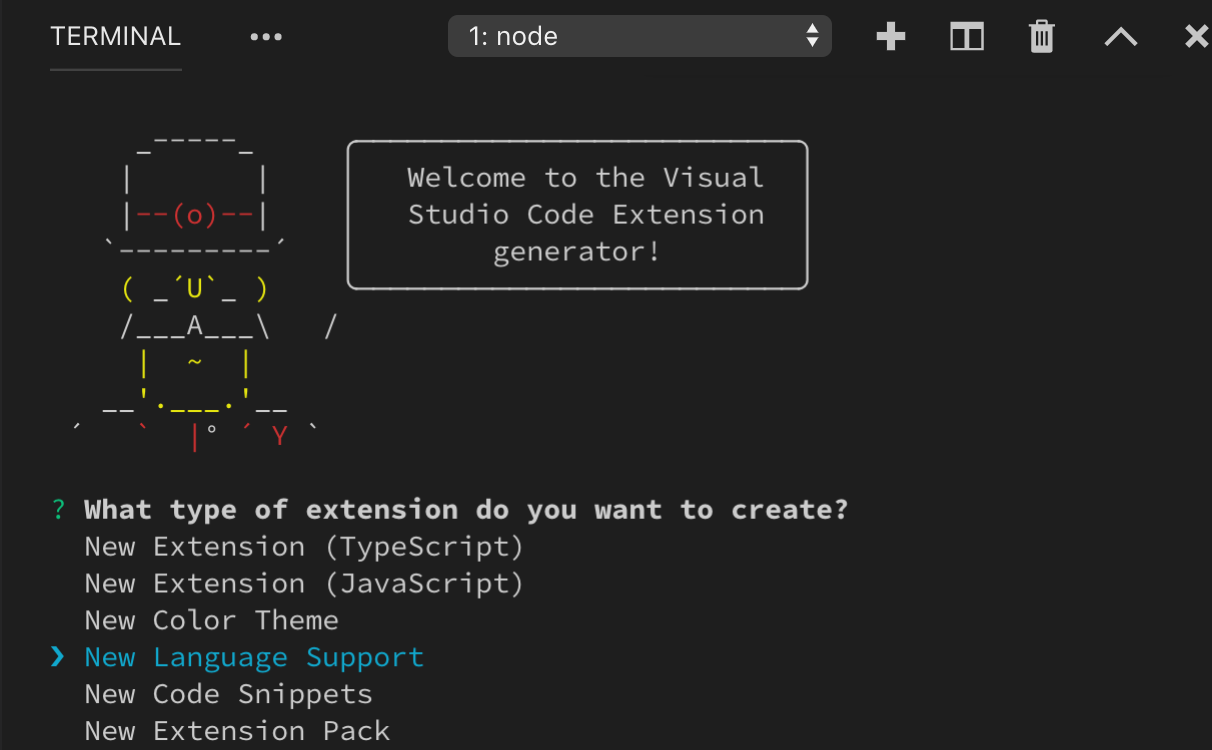 Yeoman will walk you through some basic questions to scaffold the new extension. The important questions for creating a new grammar are:

The generator assumes that you want to define both a new language and a new grammar for that language. If you are creating a grammar for an existing language, just fill these in with your target language's information and be sure to delete the languages contribution point in the generated package.json.

After answering all the questions, Yeoman will create a new extension with the structure:

Remember, if you are contributing a grammar to a language that VS Code already knows about, be sure to delete the languages contribution point in the generated package.json.

Using YAML to write a grammar

As a grammar grows more complex, it can become difficult to understand and maintain it as json. If you find yourself writing complex regular expressions or needing to add comments to explain aspects of the grammar, consider using yaml to define your grammar instead.

Yaml grammars have the exact same structure as a json based grammar but allow you to use yaml's more concise syntax, along with features such as multi-line strings and comments.

VS Code can only load json grammars, so yaml based grammars must be converted to json. The js-yaml package and command-line tool makes this easy.

Injection grammars are contributed though the package.json just like regular grammars. However, instead of specifying a language, an injection grammar uses injectTo to specify a list of target language scopes to inject the grammar into.

The grammar itself is a standard TextMate grammar except for the top level injectionSelector entry. The injectionSelector is a scope selector that specifies which scopes the injected grammar should be applied in. For our example, we want to highlight the word TODO in all // comments. Using the scope inspector, we find that JavaScript's double slash comments have the scope comment.line.double-slash, so our injection selector is L:comment.line.double-slash:

An extension that highlights SQL queries in JavaScript strings, for example, may use embeddedLanguages to make sure all token inside the string marked meta.embedded.inline.sql are treated as SQL for basic language features such as bracket matching and snippet selection.

If you can't add a meta.embedded.* scope to your grammar, you can alternatively use tokenTypes in the grammar's contribution point to map specific scopes to content mode. The tokenTypes section below ensures that any content in the my.sql.template.string scope is treated as source code:

Theming is about assigning colors and styles to tokens. Theming rules are specified in color themes, but users can customize the theming rules in the user settings.

TextMate theme rules are defined in tokenColors and have the same syntax as regular TextMate themes. Each rule defines a TextMate scope selector and a resulting color and style.

When evaluating the color and style of a token, the current token's scope is matched against the rule's selector to find the most specific rule for each style property (foreground, bold, italic, underline)

The Color Theme guide describes how to create a color theme. Theming for semantic tokens is explained in the Semantic Highlighting guide.

VS Code's built-in scope inspector tool helps debug grammars and semantic tokens. It displays the scopes for the token and the semantic tokens at the current position in a file, along with metadata about which theme rules apply to that token.

Trigger the scope inspector from the Command Palette with the Developer: Inspect Editor Tokens and Scopes command or create a keybinding for it: