Version 1.59 is now available! Read about the new features and fixes from July.

The Source Control API allows extension authors to define Source Control Management (SCM) features. There is a slim, yet powerful API surface which allows many different SCM systems to be integrated in Visual Studio Code, while having a common user interface with all of them. 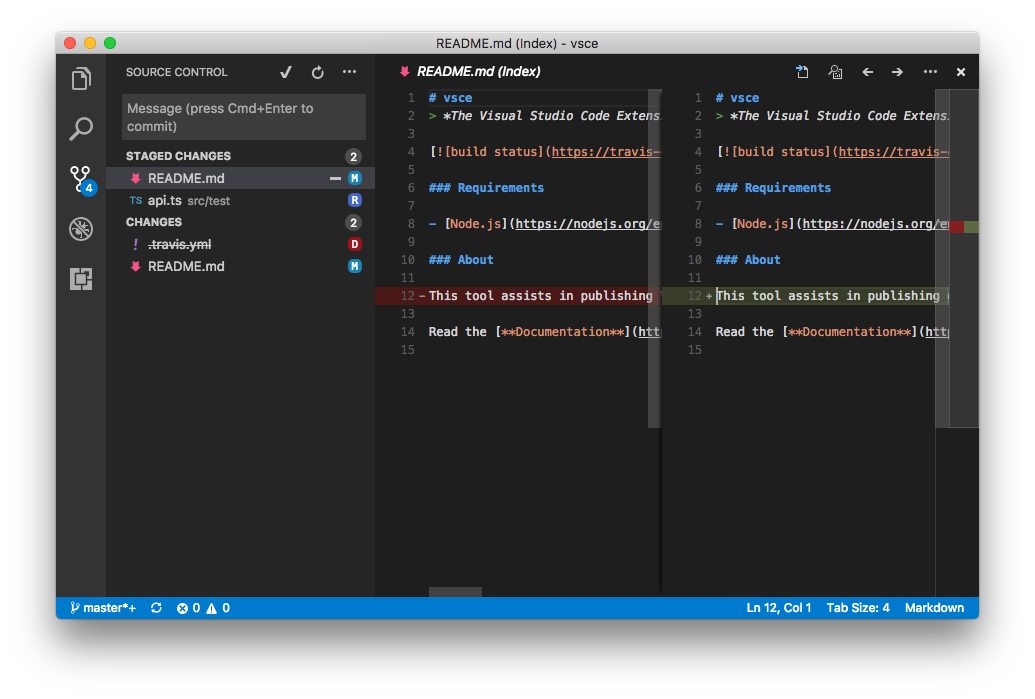 VS Code itself ships with one Source Control provider, the Git extension, which is the best reference for this API and is a great starting point if you'd like to contribute your very own SCM provider. There are other great examples in the Marketplace such as the SVN extension.

This documentation will help you build an extension which can make any SCM system work with VS Code.

Note: that you can always refer to the vscode namespace API reference in our documentation.

In order to better understand how these three entities correlate with each other, let's take Git as an example. Consider the following output of git status:

For this workspace, Git defines two resource groups: the working tree and the index. Each file change within that group is resource state:

Note how the same file, README.md, is part of two distinct resource states.

Here's how Git creates this model:

Changes made to the source control and resource groups will be propagated to the Source Control view.

The previous example would be sufficient to populate a simple list in the Source Control view, but there are many user interactions that the user might want to perform with each resource. For instance, what happens when the user clicks a resource state? The resource state can optionally provide a command to handle this action:

There are six Source Control menu ids where you can place menu items, in order to provide the user with a much richer user interface.

The scm/title menu is located to the right of the SCM view title. The menu items in the navigation group will be inline, while all the others will be within the … dropdown menu.

These three are similar:

Place menu items in the inline group to have them inline. All other menu item groups will be represented in a context menu usually accessible using the mouse right-click.

Note that the SCM view supports multiple selection, so a command receives as its argument an array of one or more resources.

For example, Git supports staging multiple files by adding the git.stage command to the scm/resourceState/context menu and using such a method declaration:

When creating them, SourceControl and SourceControlResourceGroup instances require you to provide an id string. These values will be populated in the scmProvider and scmResourceGroup context keys, respectively. You can rely on these context keys in the when clauses of your menu items. Here's how Git is able to show an inline menu item for its git.stage command: 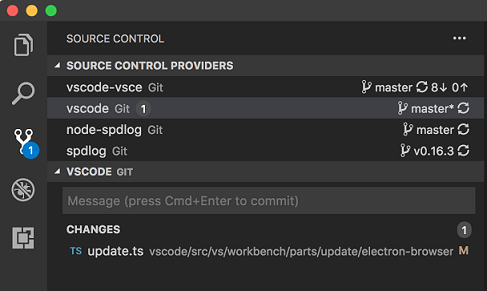 The scm/change/title allows you to contribute commands to the title bar of the Quick Diff inline diff editor, described further ahead. The command will be passed as arguments the URI of the document, the array of changes within it, and the index of the change which the inline change diff editor is currently focused on. For example, here's the declaration of the stageChange Git command which is contributed to this menu with a when clause testing that the originalResourceScheme context key equals git:

The Source Control Input Box, located atop of each Source Control view, allows the user to input a message. You can get (and set) this message in order to perform operations. In Git, for example, this is used as the commit box, in which users type in commit messages and git commit commands pick them up.

The user can type Ctrl+Enter (or Cmd+Enter on macOS) to accept any message. You can handle this event by providing a acceptInputCommand to your SourceControl instance.

VS Code also supports displaying quick diff editor gutter decorations. Clicking those decorations will reveal an inline diff experience, to which you can contribute contextual commands:

These decorations are computed by VS Code itself. All you need to do is provide VS Code with the original contents of any given file.

Using a QuickDiffProvider's provideOriginalResource method, your implementation is able to tell VS Code the Uri of the original resource that matches the resource whose Uri is provided as an argument to the method.

Combine this API with the registerTextDocumentContentProvider method in the workspace namespace, which lets you provide contents for arbitrary resources, given a Uri matching the custom scheme that it registered for.

To learn more about VS Code extensibility model, try these topics: