Visual Studio Code's debugging architecture allows extension authors to easily integrate existing debuggers into VS Code, while having a common user interface with all of them. 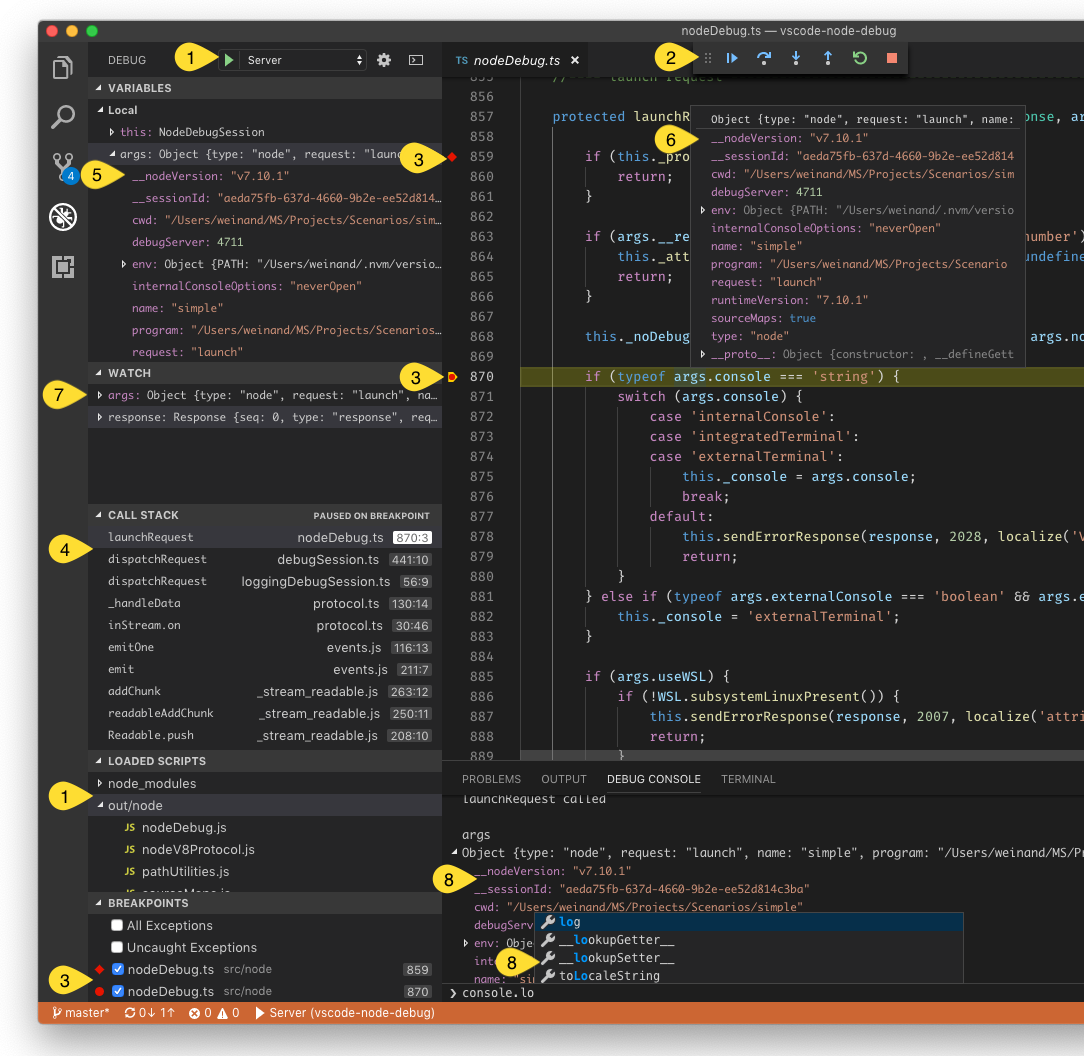 This documentation will help you create a debugger extension which can make any debugger work with VS Code.

Debugging Architecture of VS Code

Since debug adapters are independent from VS Code and can be used in other developments tools, they do not match VS Code's extensibility architecture which is based on extensions and contribution points.

For this reason VS Code provides a contribution point, debuggers, where a debug adapter can be contributed under a specific debug type (e.g. node for the Node.js debugger). VS Code launches the registered DA whenever the user starts a debug session of that type.

A more realistic debugger extension contributes many or all of the following declarative items to VS Code:

You can find more information in contributes.breakpoints and contributes.debuggers references.

In addition to the purely declarative contributions from above, the Debug Extension API enables this code-based functionality:

In the rest of this document we show how to develop a debugger extension.

Since creating a debug adapter from scratch is a bit heavy for this tutorial, we will start with a simple DA which we have created as an educational "debug adapter starter kit". It is called Mock Debug because it does not talk to a real debugger, but mocks one. Mock Debug simulates a debugger and supports step, continue, breakpoints, exceptions, and variable access, but it is not connected to any real debugger.

Before delving into the development setup for mock-debug, let's first install a pre-built version from the VS Code Marketplace and play with it:

A debug session starts and you can "step" through the readme file, set and hit breakpoints, and run into exceptions (if the word exception appears in a line).

Before using Mock Debug as a starting point for your own development, we recommend to uninstall the pre-built version first:

Now let's get the source for Mock Debug and start development on it within VS Code:

Open the project folder vscode-mock-debug in VS Code.

What's in the package?

Now build and launch the Mock Debug extension by selecting the Extension launch configuration and hitting F5. Initially, this will do a full transpile of the TypeScript sources into the out folder. After the full build, a watcher task is started that transpiles any changes you make.

After transpiling the source, a new VS Code window labelled "[Extension Development Host]" appears with the Mock Debug extension now running in debug mode. From that window open your mock test project with the readme.md file, start a debug session with 'F5', and then step through it: 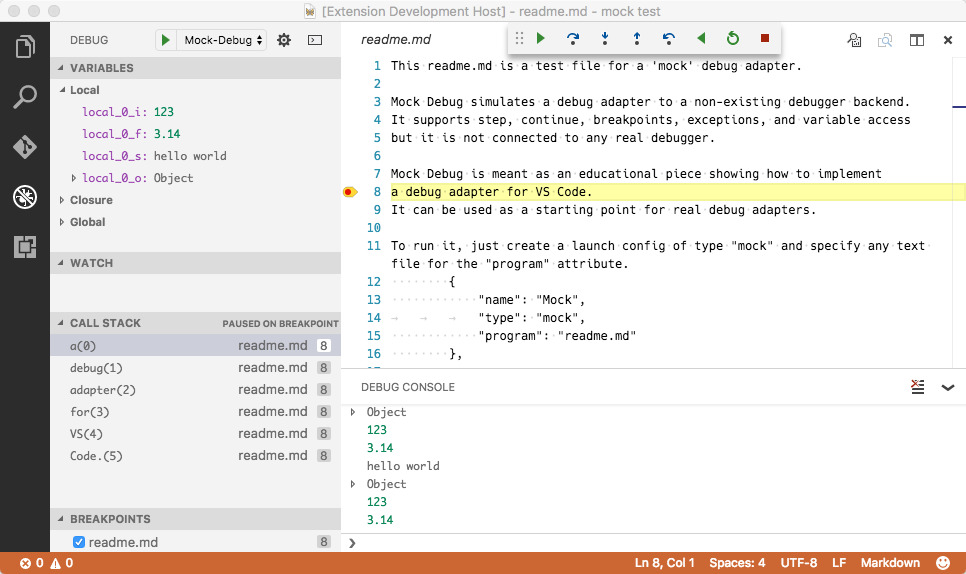 In order to debug the debug adapter itself, we have to run it in debug mode. This is most easily achieved by running the debug adapter in server mode and configure VS Code to connect to it. In your VS Code vscode-mock-debug project select the launch configuration Server from the dropdown menu and press the green start button.

Since we already had an active debug session for the extension the VS Code debugger UI now enters multi session mode which is indicated by seeing the names of the two debug sessions Extension and Server showing up in the CALL STACK view:

Now we are able to debug both the extension and the DA simultaneously. A faster way to arrive here is by using the Extension + Server launch configuration which launches both sessions automatically.

An alternative, even simpler approach for debugging the extension and the DA can be found below.

Set a breakpoint at the beginning of method launchRequest(...) in file src/mockDebug.ts and as a last step configure the mock debugger to connect to the DA server by adding a debugServer attribute for port 4711 to your mock test launch config:

If you now launch this debug configuration, VS Code does not start the mock debug adapter as a separate process, but directly connects to local port 4711 of the already running server, and you should hit the breakpoint in launchRequest.

With this setup, you can now easily edit, transpile, and debug Mock Debug.

But now the real work begins: you will have to replace the mock implementation of the debug adapter in src/mockDebug.ts and src/mockRuntime.ts by some code that talks to a "real" debugger or runtime. This involves understanding and implementing the Debug Adapter Protocol. More details about this can be found here.

Anatomy of the package.json of a Debugger Extension

Besides providing a debugger-specific implementation of the debug adapter a debugger extension needs a package.json that contributes to the various debug-related contributions points.

So let's have a closer look at the package.json of Mock Debug.

Like every VS Code extension, the package.json declares the fundamental properties name, publisher, and version of the extension. Use the categories field to make the extension easier to find in the VS Code Extension Marketplace.

First, we use the breakpoints contribution point to list the languages for which setting breakpoints will be enabled. Without this, it would not be possible to set breakpoints in Markdown files.

Next is the debuggers section. Here, one debugger is introduced under a debug type mock. The user can reference this type in launch configurations. The optional attribute label can be used to give the debug type a nice name when showing it in the UI.

Since the debug extension uses a debug adapter, a relative path to its code is given as the program attribute. In order to make the extension self-contained the application must live inside the extension folder. By convention, we keep this applications inside a folder named out or bin, but you are free to use a different name.

The initialConfigurations define the initial content of the default launch.json for this debugger. This information is used when a project does not have a launch.json and a user starts a debug session or selects the create a launch.json file link in the Run and Debug view. In this case VS Code lets the user pick a debug environment and then creates the corresponding launch.json:

configurationSnippets define launch configuration snippets that get surfaced in IntelliSense when editing the launch.json. As a convention, prefix the label attribute of a snippet by the debug environment name so that it can be clearly identified when presented in a list of many snippet proposals.

The variables contribution binds "variables" to "commands". These variables can be used in the launch configuration using the ${command:xyz} syntax and the variables are substituted by the value returned from the bound command when a debug session is started.

The implementation of a command lives in the extension and it can range from a simple expression with no UI, to sophisticated functionality based on the UI features available in the extension API. Mock Debug binds a variable AskForProgramName to the command extension.mock-debug.getProgramName. The implementation of this command in src/extension.ts uses the showInputBox to let the user enter a program name:

The variable can now be used in any string typed value of a launch configuration as ${command:AskForProgramName}.

If the static nature of debug contributions in the package.json is not sufficient, a DebugConfigurationProvider can be used to dynamically control the following aspects of a debug extension:

The MockConfigurationProvider in src/extension.ts implements resolveDebugConfiguration to detect the case where a debug session is started when no launch.json exists, but a Markdown file is open in the active editor. This is a typical scenario where the user has a file open in the editor and just wants to debug it without creating a launch.json.

This catch-all onDebug is triggered as soon as any debug functionality is used. This works fine as long as the extension has cheap startup costs (i.e. does not spend a lot of time in its startup sequence). If a debug extension has an expensive startup (for instance because of starting a language server), the onDebug activation event could negatively affect other debug extensions, because it is triggered rather early and does not take a specific debug type into account.

A better approach for expensive debug extensions is to use more fine-grained activation events:

Once you have created your debugger extension you can publish it to the Marketplace:

This approach is in fact easily doable as long as your debug adapter is implemented in TypeScript/JavaScript. The basic idea is to run the debug adapter directly inside the extension and to make VS Code to connect to it instead of launching a new external debug adapter per session.

Mock Debug shows examples for the three types of DebugAdapterDescriptorFactories and how they are registered for the 'mock' debug type. The run mode to use can be selected by setting the global variable runMode to one of the possible values external, server, or inline.

For development, the inline and server modes are particularly useful because they allow for debugging extension and debug adapter within a single process.