One goal of the July milestone was to move the Debug Adapter Protocol -- which was hiding itself in a somewhat obscure GitHub project -- to a more prominent website (see feature request #19636).

This blog provides some background about protocols, the Debug Adapter Protocol, and the motivation behind the move.

Why the need for decoupling with protocols?

"Visual Studio Code is an editor for any developer, no matter what programming language you use."

This promise is based on (at least) two pillars:

Supporting a programming language from a development tool means:

The latter might come as a surprise to some, but it was always our firm belief that debugging is an integral part of where the source code is written: the editor. Debugging is an important part of the development "inner loop."

But adding a debugger for a new language to an IDE or editor is a significant effort as the list of standard debugging features is not small:

Implementing these features for a new language is not only a significant effort, it is also frustrating that this work must be repeated for each development tool, as each tool uses different APIs for implementing its user interface.

This results in lots of duplicated functionality (and implementation) as visualized by the blue boxes in the following picture:

When we started the work on Visual Studio Code, we always envisioned decoupling the "frontend" UI from the language specific "backend" implementation as much as possible. We wanted to do this for both language smartness and debugging support.

Today we believe that we have achieved this ambitious goal:

We have created two abstract protocols that allow for decoupling the editing and debugging user interfaces in the "frontend" from the language specific smartness and debugging functionality provided by "backend" components.

The "deep understanding of a language" is surfaced by the Language Server Protocol (LSP) and the "debugging support" by the Debug Adapter Protocol (DAP).

The idea behind the Debug Adapter Protocol is to standardize an abstract protocol for how the debugging component of a development tool communicates with concrete debuggers or runtimes.

Here’s an example of how a development tool could use the DAP to communicate with a Debug Adapter for the popular "gdb" debugger:

We assume that the user has already started a debug session, but is currently stopped at the entry point of their program and wants to set (and later hit) a breakpoint.

For historical reasons, DAP uses a JSON-based wire-format inspired by the (now obsolete) V8 Debugging Protocol. Please note that this format is similar to but not compatible with the JSON-RPC used in the LSP.

After this short example of DAP communication, let's review the characteristics of the DAP approach: 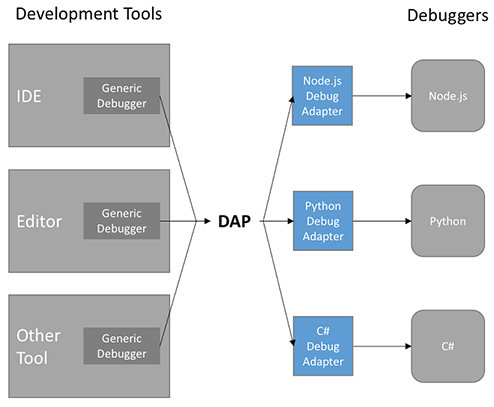 The picture shows two important benefits of the DAP approach:

These characteristics are similar to those of the Language Server Protocol published on its own website in 2016.

A new home for the DAP

This move should emphasize that the Debug Adapter Protocol in not specific to Visual Studio Code. For example, Visual Studio is now also supporting this protocol.

In the new location we provide:

The old location will continue to host the source for the three npm modules for DAP:

Since the Debug Adapter Protocol has already been available for quite some time, the move to a new website is not really an inception, but just a move to a new home...

We'd like to invite all existing and future users of the DAP to visit our new home and continue the collaboration there. For example, you can help to keep the list of supporting tools and implementations up to date by submitting pull requests in GitHub against these Markdown files: Debug Adapters, Tools, and SDKs.