Update 1.24.1: The update addresses these issues.

Welcome to the May 2018 release of Visual Studio Code. You will notice several new features available for Preview in this milestone. Give them a try and let us know what you think. Some of the key highlights include:

If you'd like to read these release notes online, go to Updates on code.visualstudio.com.
You can also check out this 1.24 release highlights video from Cloud Developer Advocate Brian Clark.

There is a new command Duplicate Workspace in New Window to duplicate the current workspace in a new window. This command can be used as a workaround to the current limitation that one workspace cannot be opened in two windows. The workaround works best when you have the setting files.autoSave set to afterDelay, onFocusChange, or onWindowChange. In this way, the editor documents will be synced through the file system when you have the same document open in different windows.

With this addition, we are deprecating the less general command Open Folder as Workspace in New Window. We plan to drop support for it in the following milestone.

You can now navigate to your previous replace terms in the Search View.

Some users want to run an npm script on single click from the Explorer and this is now supported by setting npm.scriptExplorerAction to "run". It is also now possible to run a script using the inline actions shown when hovering over a script in the tree. Finally, you can run npm install from the context menu when a package.json file is selected.

Font zoom commands have been added and they increase or decrease the font size of the editor while the rest of VS Code UI is left as-is. This feature is very handy for presentations and pair-programming.

Use the following keybindings to replace the default global zoom actions:

on Windows and Linux: 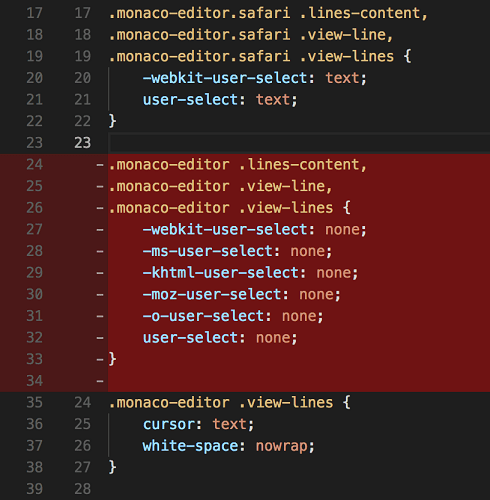 Last milestone, we changed the F8 keybinding Go to Next Problem to visit all errors and warnings in a workspace. That meant you'd leave the current editor and navigate to other files instead of returning to the top of the current file. Not everyone liked this behavior and so we have added commands to support both:

Back in the 1.17 release, the Integrated Terminal changed to rendering using canvas in order to boost performance. While this was great for the majority of users, some environments had issues with this at either the hardware and OS levels and rendering ended up taking longer. VS Code now measures the average time it takes to render a frame and if it takes too long, you will get a notification to switch to the new fallback DOM renderer:

This new renderer uses the DOM like the original terminal, so if your environment has issues rendering with canvas, this should provide a more stable experience. You can also turn on the DOM renderer manually with this setting:

Running the code command line inside the Windows Subsystem for Linux (WSL) will now suppress output and return to the prompt.

It's now possible to navigate to specific split terminals via the term Quick Open menu:

Switch to Debug view on break

It is now possible to automatically switch to the Debug view when a breakpoint is hit. Set the debug.openDebug setting to the new value openOnDebugBreak.

To better distinguish between the Start Debugging and Continue actions in the Debug toolbar, we have introduced a new icon for Continue that better aligns with the debug icons.

The CALL STACK view now shows the path segments to distinguish sources with the same name easily. A common scenario is having to debug multiple stack frames all named module.js.

Go to next or previous breakpoint

VS Code now ships with TypeScript 2.9. This update brings new language features such as import() types, json imports, and many improvements to JSDoc. It also brings some great new tooling support and fixes a number of bugs.

You can read more about what's new in TS 2.9 on the TypeScript blog.

Update import paths when a file is moved or renamed

VS Code can now automatically update import paths when a JavaScript or TypeScript file is moved or renamed:

To make sure all paths are updated as expected, make sure your project includes a jsconfig.json or tsconfig.json.

Unused variables, parameters, and imports are now greyed out in JavaScript and TypeScript: 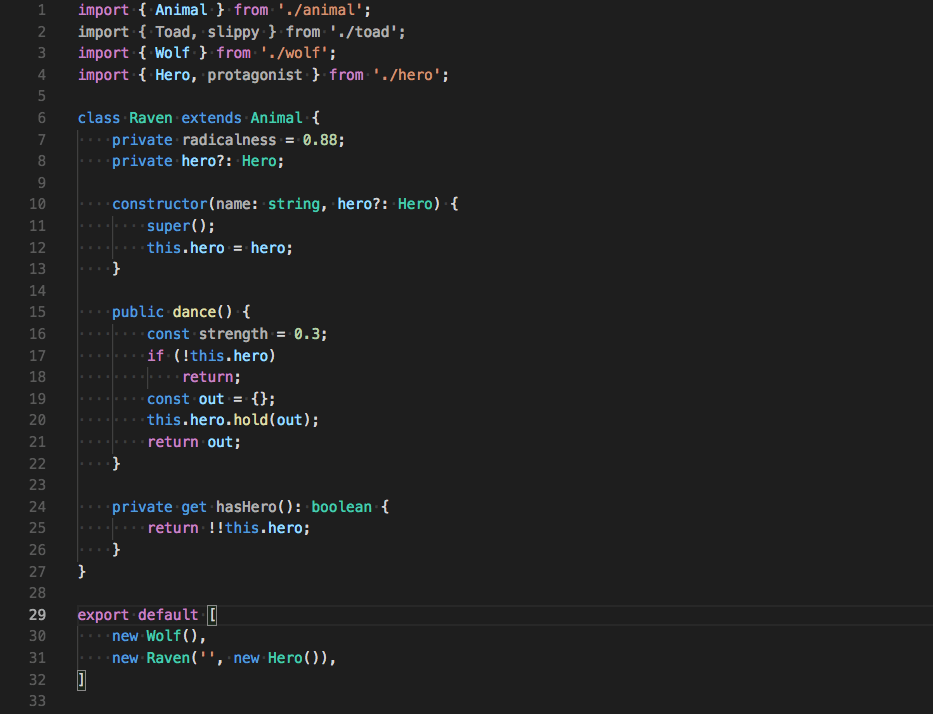 Use a Quick Fix to remove them and clean up your code automatically: 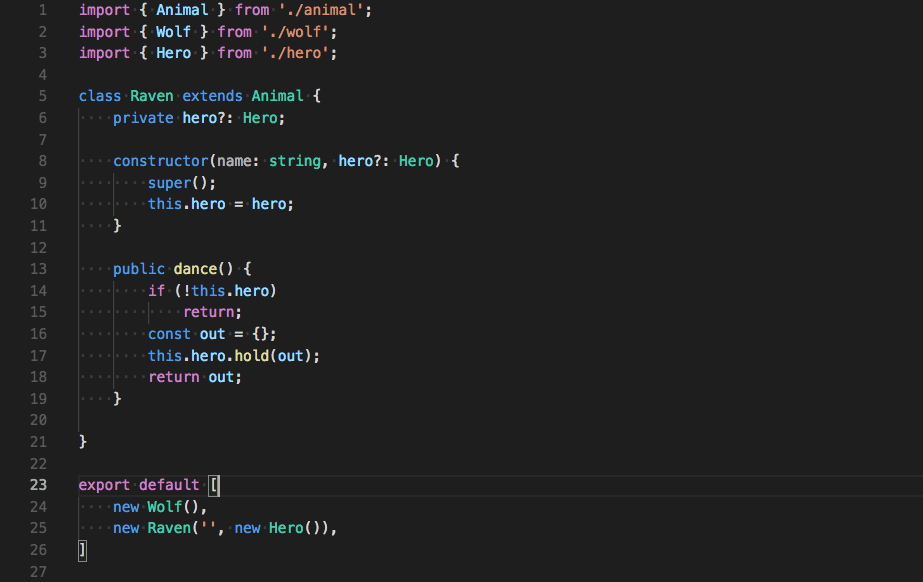 A new Move to a new file refactoring for JavaScript and TypeScript lets you quickly move classes and functions to their own file: 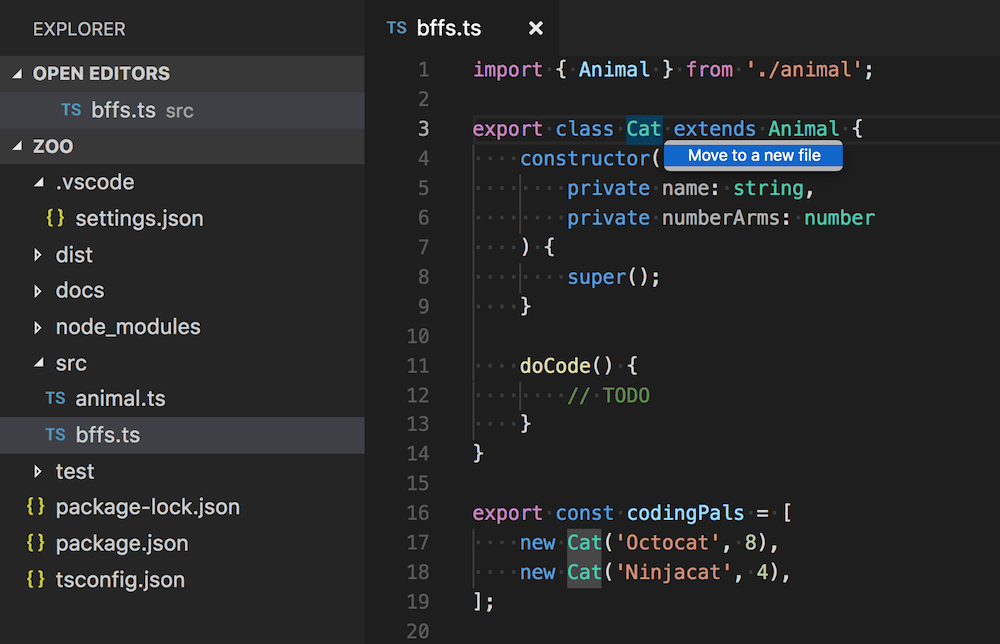 IntelliSense is now shown automatically in a few more places. These include:

A new Generate 'get' and 'set' accessors refactoring lets you quickly encapsulate a field in JavaScript and TypeScript:

Syntax aware folding is now enabled by default for JavaScript and TypeScript. A preview of this feature first shipped with VS Code 1.22 but there were a few bugs that we wanted to fix before turning it on for everyone.

You can now explicitly specify the quote and path styles that VS Code uses for auto imports and other generated JavaScript and TypeScript code.

Blocks of import statements are now foldable in JavaScript and TypeScript:

This feature requires TypeScript 2.9+. You must also have semantic folding enabled (it is enabled by default). Make sure you have "editor.foldingStrategy" set to "auto" and that you have not set "typescript.experimental.syntaxFolding": false.

Completion for SCSS's @-Rules and Directives has been added.

This release ships with an Outline view! While already functional, it is still in preview and needs to be enabled manually. Do so by right clicking on the top Explorer bar and by selecting Outline.

The Outline view shows the symbol tree of the currently active editor. For symbols, the view relies on information computed by your installed extensions. The outline view includes a filter box, different 'Sort By' modes, optional cursor tracking, and supports the usual open gestures, like Open to Side. 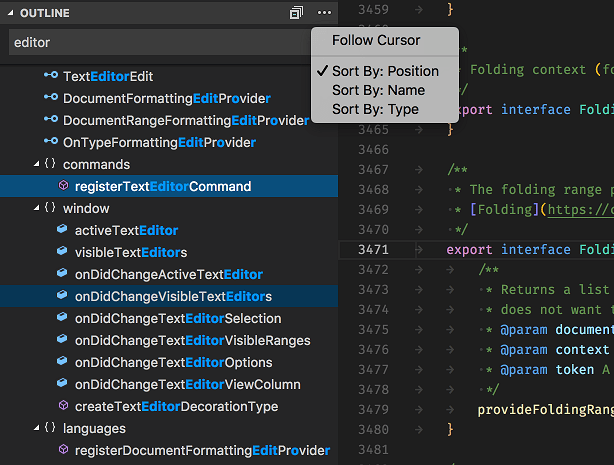 Stay tuned, more work is planned and you can subscribe to issues tagged with the outline label.

During this milestone, we began work to implement an editor grid layout feature to allow opening editors vertically and horizontally without limits:

This feature will be available in our Insiders release in the beginning of June. Subscribe to issue 14909 to receive a notification when this happens.

In this milestone, we began experimenting with a GUI for editing settings, which has been a popular request for a long time. This is an early preview, but if you'd like to try it out, you can open it with the Preferences: Open Settings (Preview) command. We would like any feedback you have - you can leave it on this GitHub issue.

In this milestone, we started to work on alternative locations for the Debug toolbar. As a first step, we have introduced a new setting debug.toolBarLocation and made an initial attempt at a "docked" Debug toolbar (in addition to the old "floating" toolbar):

When docked, the debug actions appear at the top of the Debug view when a debug session starts (and they hide the debug configuration dropdown menu).

We are still experimenting with this new toolbar design, so you can expect more changes in the next milestones.

The following events were added to the TreeView when an element is collapsed or expanded.

The task API graduated and is now available for all extension authors. It moved from the vscode.workspace to the new vscode.tasks namespace. We're leaving the old API in workspace for one additional milestone so that extension authors have time to move to the new API. In addition, events were added to signal the start and end of the underlying process bound to a task.

A callStackItemType context key has been introduced to control what contextual commands appear for focused items in the CALL STACK view. The following values are available:

There are two theme colors for showing a border at the top of a tab:

It used to be that commands invoked from a keybinding which did not specify any argument list would receive an empty object {} as the only argument, when invoked. In the upcoming release, that argument will be null instead.

The CodeActionProvider.provideCodeAction method's range parameter is now a Selection | range. The provided value will always be the user's selection if there is an active editor.

The new preserveFocus focus flag on Webview.reveal allows extensions to show a webview without focusing it. This can be used to open a webview with documentation or other non-interactive content to the side of the current editor.

You can now press ctrl+r or cmd+r when focused on a webview's Developer Tools to reload that webview. Keep in mind that this will only reload the webview itself. The html value of webview is not changed.

Extension authors can now access all standard VS Code theme colors inside webviews using CSS variables. These variable names are prefixed with vscode and replace the . with -. For example editor.foreground becomes var(--vscode-editor-foreground).

This milestone we added new proposed extension APIs. We plan to add these APIs to stable in a future milestone once we are confident enough with them. We welcome any feedback on how they work for your extension.

Note: These APIs are still proposed, so in order to use it, you must opt into it by adding a "enableProposedApi": true to package.json and you'll have to copy the vscode.proposed.d.ts into your extension project. Also be aware that you cannot publish an extension to the Marketplace that uses the enableProposedApi attribute.

This release ships an outline view. Currently, there is logic to synthesize a tree from the flat list of document symbols but the logic isn't perfect. We are still discussing the API for this (see #34968) but you can still prepare for this:

Feel free to join the discussion and to propose the API for this: #34968.

The SearchProvider API lets extensions implement file search and text search in a workspace. It will be especially useful alongside a FileSystemProvider.

To learn more, have a look at the searchProviderExample.

Our team maintains or contributes to a number of VS Code extensions. Most notably this month:

During this milestone, the Vetur Vue.js extension started taking advantage of VS Code's file watcher. As a result:

We moved our continuous integration builds over to our friends at Azure DevOps (👋 shout out to @chrisrpatterson & @lszomoru for their ongoing support). This was only possible given the DevOps team's work on public projects, as well as several other features. Azure DevOps allows us to have a single YAML based build definition which targets all our three major platforms: Windows, macOS and Linux. 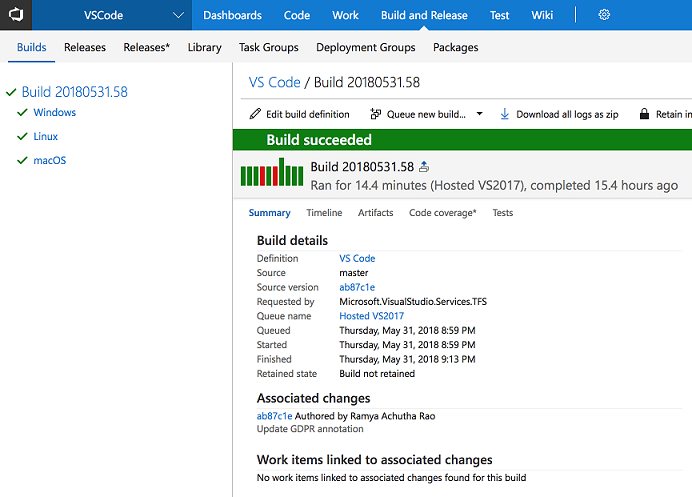 We've rewritten Working with Docker which shows how you can create, publish and reuse Docker containers from within VS Code.

We've added a new Working with MongoDB topic for managing MongoDB databases in VS Code with the Azure Databases extension.

There are over 800 members in the Transifex VS Code project team with about 100 active contributors every month. We appreciate your contributions, either by providing new translations, voting on translations, or suggesting process improvements.