The April 1.1 release is our first monthly release after announcing 1.0. We have been overwhelmed by the positive response to that release and the excitement in the community for VS Code and the rapidly growing ecosystem of new languages and extensions.

Keeping to our monthly release cadence, we've put together a nice selection of new features and fixes in April. We hope you enjoy it.

Here is an overview of some of the updates contained in this release:

Extension authors will be especially happy with these updates:

We have a visual design for how editor tabs might look in VS Code. We will start to implement the design in the next milestone.

Disable automatic revealing of files in the explorer

By default, VS Code expands folders and scrolls your active file into view in the file Explorer. If you don't want this automatic reveal behavior, you can disable it through a new setting explorer.autoReveal. Set explorer.autoReveal to false to prevent your Explorer view from changing as you switch between active files. There is a new action, Show Active File in Explorer, if you would like to explicitly display (reveal) the currently active file in the Explorer.

You can now double-click on some resize borders (sashes) in the workbench to quickly resize them:

The workbench.action.reopenClosedEditor command has been added which will reopen the most recent file removed from the working files list. The default key binding for this command is ⇧⌘T (Windows, Linux Ctrl+Shift+T).

You can now disable the Emmet abbreviation triggered on Tab using the emmet.triggerExpansionOnTab setting.

VS Code debugging now supports arbitrarily deep call stacks. For performance reasons, we only load twenty frames initially but there is now a button at the bottom for loading the next set of frames: 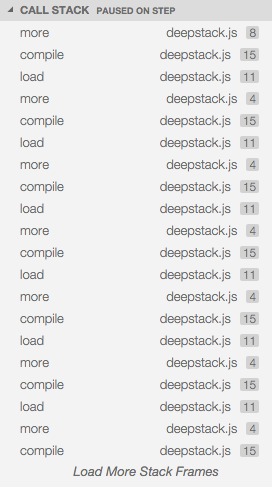 The VS Code Node.js debugger no longer shows ES6 Sets, Maps, Promises, and Generators as undefined or empty objects.

Set and map items show a sequence number next to the item because both data structures preserve the insertion order: 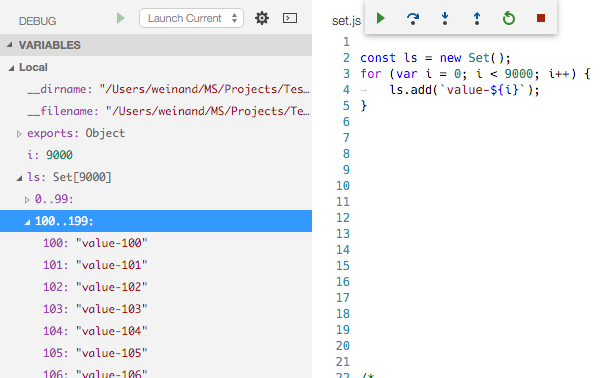 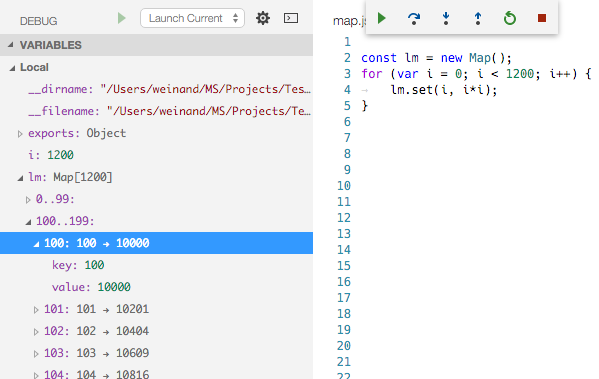 Object properties with getters are no longer shown as undefined. An example for this are the environment variables available through process.env.

The Node.js V8 debugger protocol truncates strings automatically to a (non-configurable) 80 characters. In the April release, VS Code works around this limitation and truncates only strings with more than 10000 characters.

Inspecting large data structures like arrays or buffers results in Node.js becoming unresponsive because the V8 debugger protocol does not provide a way to access large data structures in chunks. In Node.js 0.12.x, VS Code started to dynamically inject code into the Node.js runtime to improve the V8 debugging protocol but this stopped working after the io.js/node.js reunion for 2.x and 3.x versions. A recent fix to Node.js made code injection work again. So if you see performance problems, make sure that you are using at least Node.js version 4.3.1 of the LTS stream or version 5.6 of the stable stream.

We added experimental support for automatically skipping 'uninteresting code' when stepping through code in the debugger. 'Uninteresting code' is code that is generated by a transpiling process but is not covered by a source map so it does not map back to the original source. This code gets into your way when stepping through source code in the debugger because it makes the debugger switch between the original source code and generated code that you are not really interested in.

The following screen cast shows stepping through a simple async/await snippet first with the feature disabled and then enabled:

The zip archive now included the CLI (./bin/code) and has been improved to support custom install locations and work when symlinked to.

You can now specify which external shell VS Code will launch when you use commands like Open in Command Prompt (or Open in Terminal on OS X or Linux). Set the terminal.external user or workspace setting for your platform (windowsExec, linuxExec) to the executable to launch (cmd is the default for Windows).

For example, to set PowerShell as your external shell on Windows and Terminator on Linux, use:

We added a new command for extension writers to open a folder in the same or new window. The command identifier is vscode.openFolder and it accepts two optional arguments uri and newWindow. If you omit the uri argument, the native file dialog is displayed for the user to select a folder.

The extensions API now allows you to provide custom Close button affordance (text and action) when showing a message using window.show{Information|Warning|Error}Message call. Just pass in a message item which has the isCloseAffordance-property set to true.

If you have your own JSON files and want to improve the editing experience, you can associate JSON schemas to your files. The schemas associations will be picked up by the JSON language support that ships with VS Code and you will get validations, completions and hovers for free. The schema association can be done either by a user configuration or by an extension point.

In some cases, you want more control, for example, you may want to provide completion support that requires a database lookup, or you want validation that cannot be expressed by a regular expression. To implement your own completion, validation, and hover support, you can use the regular VS Code APIs. To make this easier, we moved our JSON scanner and parsers to a node-module, jsonc-parser, that you can reuse. You can see this module in action with the dependency completion support for package.json and bower.json that is now part of the JavaScript extension and for project.json soon to be part of the C# extension.

Upon starting a debug session, VS Code now emits a onDebug:{type} event, for example 'onDebug:node'. Debug extensions can now be activated by listening for this activation event.

For Node.js based debug adapter development, we've made the debug adapter test support available as an npm module vscode-debugadapter-testsupport.

The source for this module lives in the GitHub repository vscode-debugadapter-node.

You can find examples of how to use the module here:

Version 2.x of the language server protocol was released together with a corresponding client library to be used in extensions and a server library for Node.js.

The major changes are:

This release has a number of notable bug fixes.