Update 1.58.2: The update addresses these issues.

Welcome to the June 2021 release of Visual Studio Code. There are a number of updates in this version that we hope you will like, some of the key highlights include:

Join us live at the VS Code team's livestream on Tuesday, July 13 at 8am Pacific (4pm London) to see a demo of what's new in this release, and ask us questions live.

Insiders: Want to try new features as soon as possible? You can download the nightly Insiders build and try the latest updates as soon as they are available.

The Workspace Trust feature was a big change that came in the 1.57 release and we believe it is important that developers can safely browse code, even when they are unfamiliar with the source. This milestone we've been absorbing customer feedback and have focused on fixing issues and following up on suggestions.

In order to help people discover the user settings that can customize Workspace Trust, there is a new Configure your settings action in the header of the Workspace Trust editor. This action will bring up the Settings editor filtered by @tag:workspaceTrust. 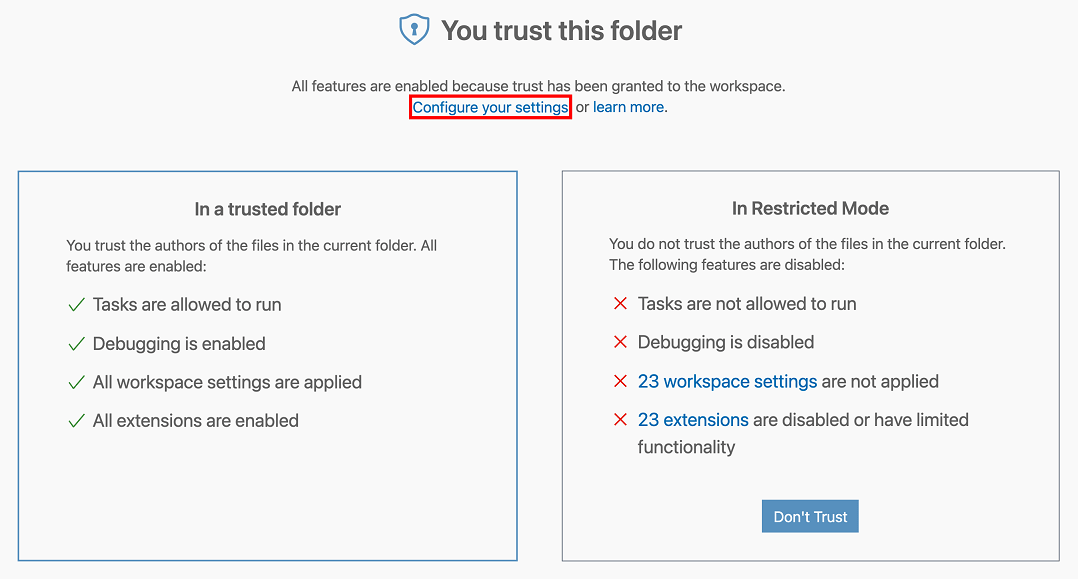 Speaking of settings, there is a new setting to configure when the banner appears indicating that the current window is in Restricted Mode. Similar to the security.workspace.trust.startupPrompt setting, the new security.workspace.trust.banner allows you to disable the banner after you've become familiar with the Workspace Trust feature and don't need a reminder that you are working in Restricted Mode. By default, this banner shows once per workspace and remains until it is dismissed ("untilDismissed"). The other options for displaying the Restricted Mode banner are "always" and "never".

You can learn more about the rationale and development of Workspace Trust in the recent Workspace Trust blog post. The post explains how Restricted Mode helps protect you from unintended, and potentially malicious, code execution and has tips to set up your development machines so you can work both quickly and safely.

This iteration adds support to the Settings editor for settings objects with a fixed number of Boolean properties, by rendering the properties as a list of checkboxes.

This iteration also adds additional support for arrays of enumerations, by using dropdowns in editing mode instead of plain textboxes.

There is now a new flavor of workspace, called a "transient" workspace, that behaves differently than usual workspaces, specifically:

Designate a transient workspace by adding the transient property set to true in the workspace .code-workspace file:

There is now a Troubleshoot view for Settings Sync that contains all logs and the last sync states. You can access this view by running the command Settings Sync: Show Synced Data and enabling it by opening the Views submenu and checking Troubleshoot: 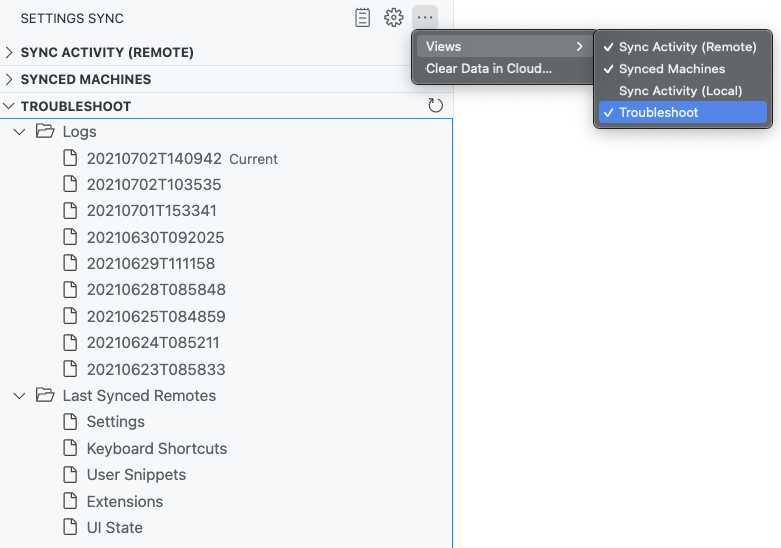 There is a new setting, search.maxResults, which lets you set the maximum number of text search results. The default is 20,000, up from 10,000 previously. You may see some slowness when loading a very large number of search results.

Terminals in the editor area

Terminals can now be created in or moved to the editor area, enabling a multi-dimensional grid layout that persists and remains visible regardless of panel state.

To use terminals in the editor area, there are several options: 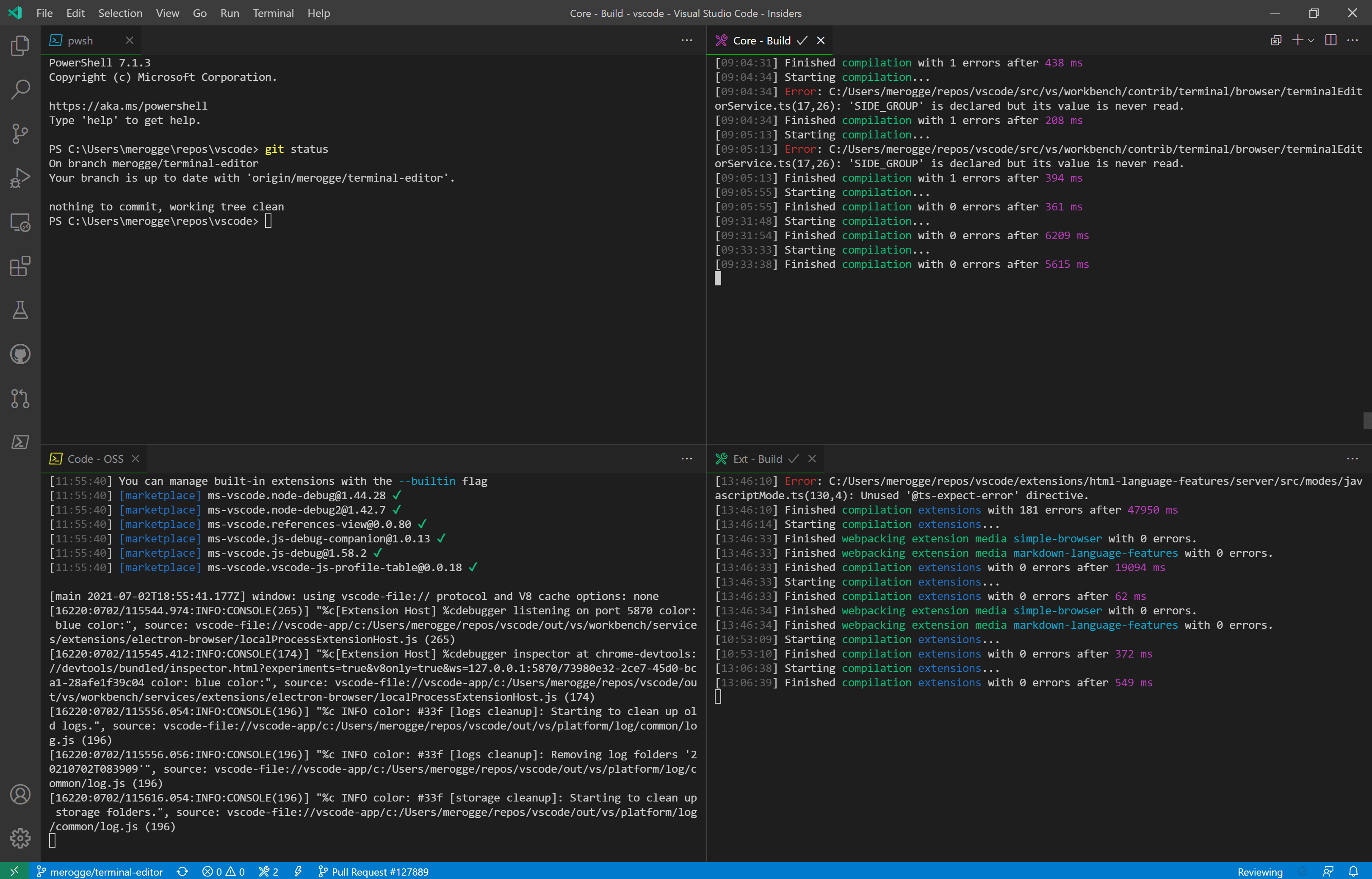 The new terminal.integrated.defaultLocation setting can be set to editor to direct newly created terminals to the editor area by default.

The new terminal.integrated.showLinkHover setting lets you disable link hovers in the terminal. This can be useful if you find hovers on terminal links distracting.

There are new settings to customize the editor's scroll bars:

Below the editor's vertical scroll bar width is set to 30 pixels.

You can create a math equation block with double dollar signs:

You can set "markdown.math.enabled": false to disable this feature. 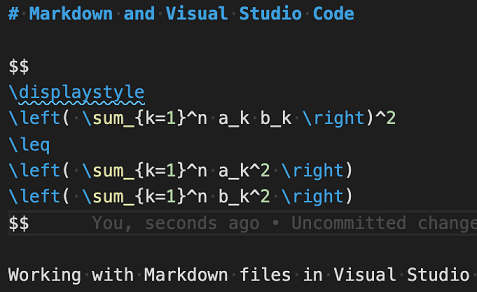 This works both in normal Markdown files and in Markdown cells inside notebooks.

We now bundle TS 4.3.5. This minor update fixes a few important bugs, including auto imports not working in JSX.

When debugging is started without a launch.json file, VS Code looks at the active editor and based on the language mode of the editor decides what debug extension to use. However, for some languages, multiple debug extensions are possible, and in that case, VS Code prompts you to choose one of them. To make debugging smoother, VS Code now remembers the chosen debugger per file, so that the next time you start debugging, the session starts without any prompts.

In the short video below, the user selects the Node.js debug environment for debugging a single JavaScript file and that choice is remembered when a new debug session starts for that file.

The Debug Console suggestions are no longer accepted on Enter, but only on Shift+Enter and Tab. Previously, it was easy to accidentally accept a suggestion when you just wanted to evaluate what is already typed in the Debug Console input.

In order to make the Tab key more discoverable as a way to accept suggestions, VS Code now has a hint Status bar ("Insert (Tab)") in the Debug Console input.

We have started working on providing a built-in interactive window experience on top of the notebook ecosystem and the Jupyter extension has adopted it behind a setting jupyter.enableNativeInteractiveWindow. If the feature is enabled, the Jupyter extension will open the built-in editor instead of the webview implementation, when running code from Python files or directly launching from the Command Palette. The built-in editor works with your customized keybindings/keymaps or language extensions since it's deeply integrated with the workbench.

We have been working on supporting debugging in Jupyter notebooks, so that you can set breakpoints in notebook cells, execute cells step-by-step, and use all other VS Code debugger features. This is experimental, but you can try it out by setting "jupyter.experimental.debugging": true, installing version 6 of ipykernel in your selected kernel, then clicking the Debug button in the notebook toolbar. 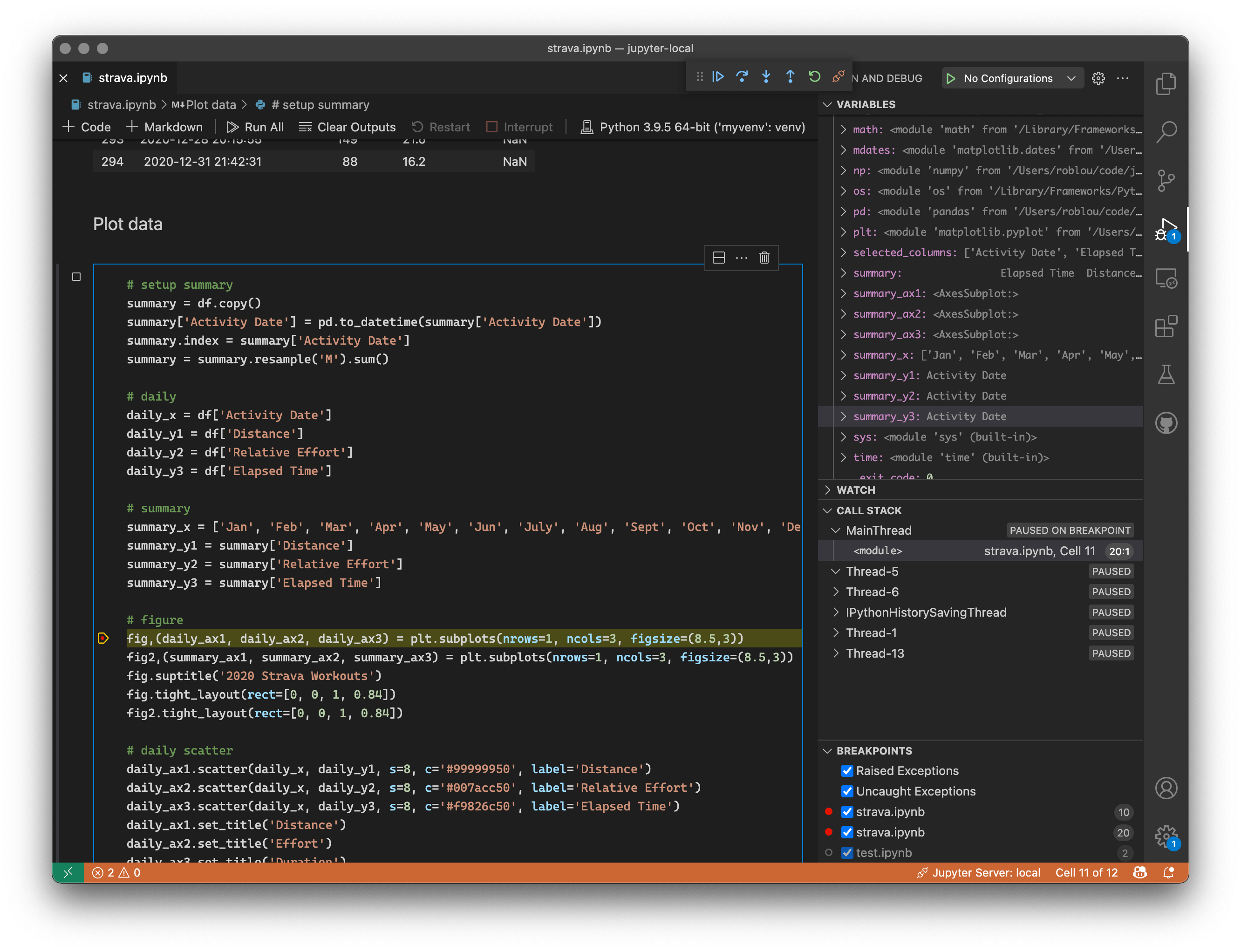 The focus this iteration for the GitHub Pull Requests and Issues extension was on fixing bugs. Check out the changelog to see the highlights.

Feature highlights in 1.58 include:

We have developed a Live Preview extension, which hosts a local server for web development previewing! 🎉

It features an in-editor browser preview, live preview refreshing (on file change or on save), multi-root support, and more!

The extension also has a Live Preview task, which runs a persistent server and allows you to view server traffic and its associated files.

To learn more about what it can do, you can find details in the Marketplace or check out its repo.

This release includes initial support for the upcoming TypeScript 4.4 release. You can read more about the new language features and improvements in TypeScript 4.4 on the TypeScript blog.

Please share your feedback and let us know if you run into any bugs with TypeScript 4.4.

It's now possible to move terminals between windows by detaching via Terminal: Detach Session in one window and attaching to another with Terminal: Attach to Session. In the future, this should help enable cross-window drag and drop!

We have added new API for more detailed and structured completion item labels. You can now use the vscode.CompletionItemLabel type for item's labels and it allows you to specify label, details, and description.

These new properties allow language extensions to show signatures or qualifiers but also other completion provider can utilize this. For instance, the GitHub Pull Request and Issues extension now shows full names alongside aliases. 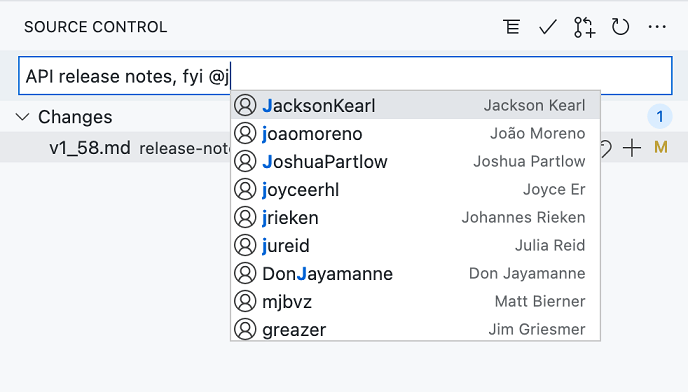 The API for showing modal information, warning, and error messages now supports providing details. Detail text is rendered below and less prominently than the actual message. 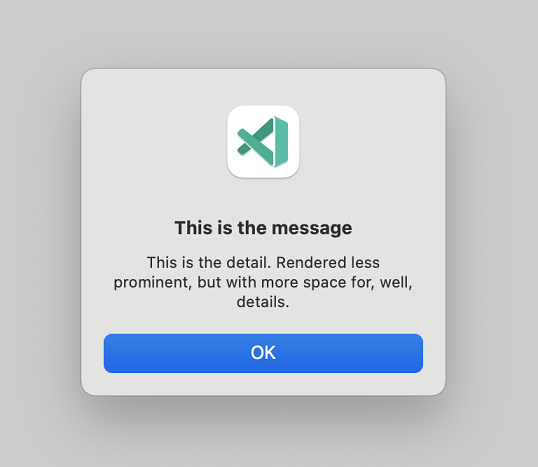 The dialog above is produced with the following code snippet. Note that detail text is only supported for modal messages (modal: true).

Terminal profiles can now be contributed by extensions and they will be displayed in the profile picker: 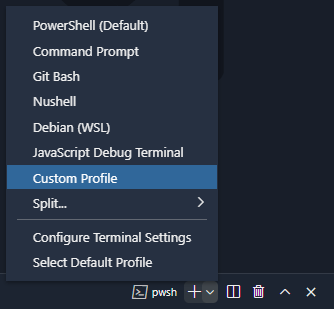 To contribute terminal profiles, you will need to do three things:

First, add the contribution to your package.json:

Next, add the activation event so the extension is activated when the user requests the profile:

Finally, register the terminal profile provider that will return the set of options used to create the terminal. The options can be either the standard process-based TerminalOptions or the custom ExtensionTerminalOptions:

The new Pseudoterminal.onDidChangeName event allows changing the name of terminals created with ExtensionTerminalOptions.

Set the icon for terminals created via the extension API

window.createTerminal now accepts an iconPath, associating an icon with the terminal in its tab.

There is a new Memento.keys() API to enumerate the set of saved Memento keys. This API can make it easier to deal with previously saved data and be helpful if you need to migrate saved data.

A new version of the language server protocol, together with the corresponding npm modules, has been published. The version contains the final proposal for the diagnostic pull model specification.

We are planning to integrate a memory viewer in a future version of VS Code's debug experience. For this support, a ReadMemory request has existed in the Debug Adapter Protocol for some time. We are now working on a corresponding WriteMemory request and a Memory event. The WriteMemory request has a final proposal that will be added to DAP in the next milestone. The Memory event proposal is still under discussion. If you are a debug extension author and interested in these DAP protocol additions, we'd appreciate your feedback.

There is a new proposed API to support rich hovers on Status bar items. To try it out, provide a MarkdownString in StatusBarItem.tooltip2.

The march to finalize the testing APIs continues. This iteration, we refactored some of the testing APIs to better match the style of other APIs in the extension host. To track the finalization process and hear about changes to the APIs, follow issue #122208.

The primary changes we foresee are to how "run configurations" are provided. To track or weigh in on the progress of these runner APIs, follow issue #127096.

Finally, we began investigation and the initial implementation of test coverage, which will receive surface area in the UI in the coming weeks.

We have updated our TypeScript projects to allow using recent JavaScript APIs, like Promise.allSettled or String.replaceAll. We also output more modern JavaScript, ES2020, which reduces the overall size of our main bundle slightly.

This milestone we continued to make the VS Code window ready for enabling Electron's sandbox and context isolation features.