Update 1.50.1: The update addresses these issues.

Welcome to the September 2020 release of Visual Studio Code. There are a number of updates in this version that we hope you will like, some of the key highlights include:

Join us live at the VS Code team's livestream on Tuesday, October 13 at 8am Pacific (4pm London), to see a demo of what's new in this release and ask us questions live.

Insiders: Want to try new features as soon as possible? You can download the nightly Insiders build and try the latest updates as soon as they are available.

Some changes in this release around how the macOS Keychain is accessed from VS Code will require you to acknowledge the following prompt for keychain access on macOS, even if you've previously allowed keychain access:

Details: VS Code previously accessed the macOS keychain from the window process itself, but now accesses it from the main process. As such, for macOS it prompts for approval like a new application is requesting access, because the process is a different one from before.

Back in July, we mentioned in the 1.48 release notes that we were investigating ways to improve the accessibility of the settings editor. After a few months of talking to screen reader users, experimenting, prototyping, and gathering feedback from the community, we are shipping the new experience, which we believe is an improvement for all keyboard-heavy users, whether using a screen reader or not.

If you would like to read more about the motivation and thinking behind this approach, please see GitHub issue #108006.

Pinned tabs were introduced in our May 2020 release. Since then, we've received valuable feedback on how to improve this experience further, and for this milestone there are a couple of changes worth mentioning.

A new setting workbench.editor.pinnedTabSizing allows you to configure how large a pinned tab should appear:

If you liked how pinned tabs looked prior to this release, make sure to configure "workbench.editor.pinnedTabSizing": "compact".

Pinned tabs also show a new "pinned" icon to allow you to unpin with one click. This icon will also appear in the "Open Editors" view.

Some other improvements include:

A few new editor context keys have been introduced, deprecating some of the existing ones. If you are using these in your keybinding settings, please update them:

Two new context keys have been added for resources.

In this release, we improved the experience of recommending extensions using notifications by making them smarter and less noisy to users.

For those who prefer to work with the panel maximized, you no longer have to maximize the panel each time after toggling it open. For those that don't, the old panel behavior isn't going away.

Instead, a new setting, panel.opensMaximized, allows users to adjust to their own preference whether or not the panel always opens maximized when toggled with Toggle Panel. The options are always, never, and the default value preserve. The preserve option opens the panel maximized if it was maximized before being closed, and opens it non-maximized otherwise.

Additionally, if the panel is hidden, Toggle Maximized Panel will now always open the panel maximized.

Decreased minimum window width when panel is on the bottom

When the panel is on the bottom rather than on the side, the minimum window width is 400px instead of 600px. This way, developers who want a narrower editor-only or panel-only window can now move the panel to the bottom, optionally hide or maximize it, and then resize the window to the new narrower minimum width.

VS Code is now available for both Linux ARMv7 and ARM64 architectures. This means you can now officially use VS Code on a Raspberry Pi, Chromebook, and other ARM-based devices! On these devices, you can also leverage the VS Code extensions for Remote Development to get access to more powerful development environments when you need them. 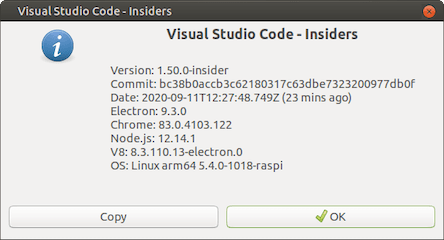 The Debug Console now supports filtering, making it easier for users to find the output they are looking for, or to hide irrelevant logging output. We've added a badge to make it clear how many items are filtered away.

Last month, we introduced new auto attach modes as an experimental feature. This month, they have left the experimental state. The previous debug.autoAttach setting is deprecated in favor of the debug.javascript.autoAttachFilter option. The auto attach badge in the status bar now shows the current mode and allows you to toggle between modes.

The flame chart extension will now show a real-time view of performance metrics while debugging JavaScript code. CPU and memory usage are shown for Node.js programs and extension debugging. Debugging Chrome or Edge will additionally show metrics for DOM nodes, relayouts, and restyles.

In addition to the controls in the view, there are a few settings you can use to control it:

Also new in the flame chart extension is a "left heavy" view, toggled by clicking the button in the upper-right corner of the chart.

This view groups call stacks and orders them by time, creating a visual representation of the "top down" table you might have used in other tools. This is especially useful if your profile has lots of thin call stacks (common with things like web servers) which are hard to get a sense of in the chronological view.

Previously if you tried to debug a file that has a sourcemap, but for which the source was not available, you would get stuck on a "could not load source" error and would be unable to view the compiled code. We now show a prompt allowing you to ignore the sourcemap and step through compiled code in these cases.

Git commit commands with the --no-verify flag are now available after enabling the git.allowNoVerifyCommit setting.

You can now specify a list of locations to look for the git executable via the same git.path setting, by using an array of strings.

Addresses this request to save the Source Control view input on window reload.

Search the workspace by selecting text in the terminal

The standard shortcut for searching the workspace ⇧⌘F (Windows, Linux Ctrl+Shift+F) will now use the terminal's selection if it's focused.

You can now select which settings sync service to use (insiders or stable) while turning on Settings Sync. Note: This option is only available on Insiders.

VS Code supports the TypeScript 4.1 beta and nightly builds. The 4.1 update brings some new TypeScript language features, such as support for recursive conditional types, as well as tooling improvements. One focus area has been adding initial support for @see tags in JSDoc comments.

Work continues on the GitHub Pull Requests and Issues extension, which allows you to work on, create, and manage pull requests and issues.

To learn about all the new features and updates, you can see the full changelog for the 0.21.0 release of the extension.

Feature highlights in 1.50 include:

The approval flow to allow the execution of a ESLint library got reworked. The initial experience is now as follows:

The execution of the ESLint library can be denied or approved using the following gestures:

All gestures will open the following dialog:

The chosen action is then reflected in the ESLint Status Bar item in the following way:

You can manage our decisions using the following commands:

The Template String Converter extension converts quotes to backticks when a $ and { are entered within a string in JavaScript and TypeScript files.

The Docs View extension uses the new Webview View API to show documentation for the symbol at the current cursor position in the sidebar or panel: 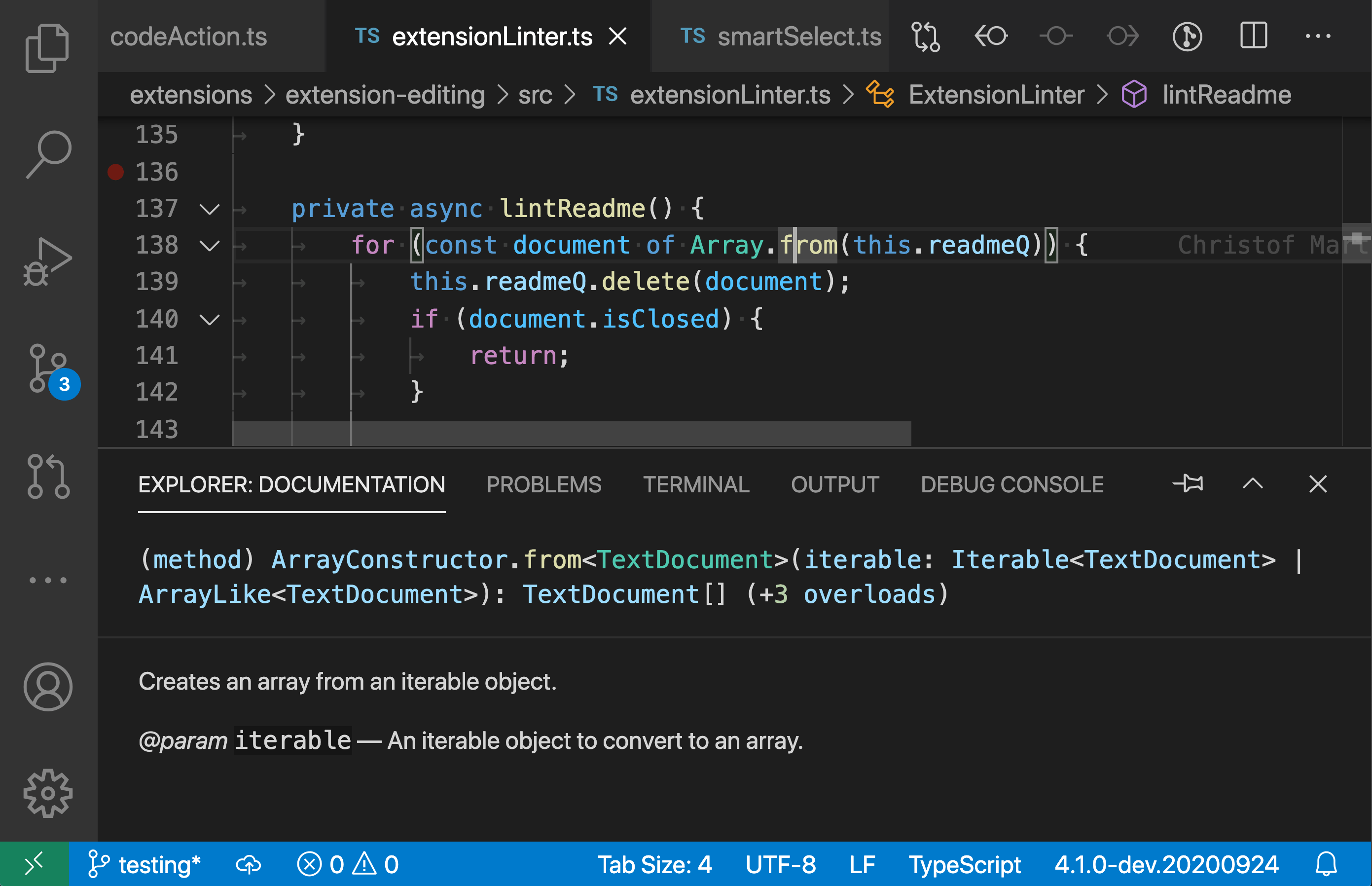 The submenu API has been promoted out of proposed state. Extension authors can now define and use submenus across supported menu locations. Check out the syntax as well as the possibilities that this API enables.

Instances of SourceControlResourceState now support an optional contextValue: string field, which allows defining a context value to match again when clauses in the scm/resourceState/context menu. The context key to use is scmResourceState. More details on the original feature request and respective pull request.

For code action providers, we have added an optional function (CodeActionProvider#resolveCodeAction) which allows you to defer the computation of the actual edits a code action is going to make. This should help reduce the time it takes to provide code actions.

The references viewlet now exports an API that allows its content to be defined by other extensions.

The Webview View API allows extensions to contribute webview based views to the sidebar or panel. These views can offer specialized presentations of data, more advanced user interfaces, and much more. 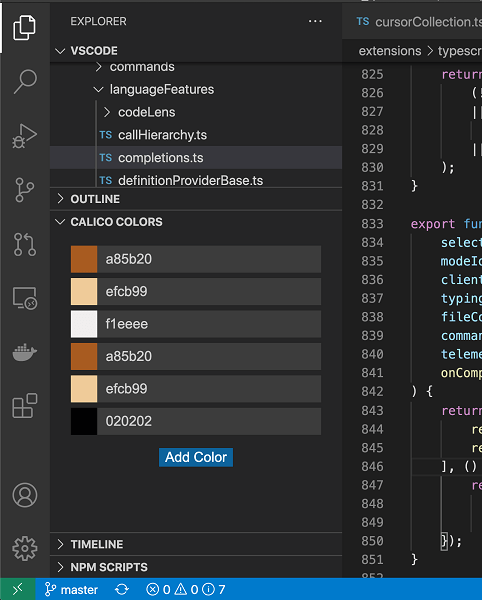 We've added the following new icons to our codicon library:

The TreeView now has an optional description property which can be used to show less prominent text next to a tree's title.

The following new and changed APIs are part of the notebooks API proposal:

We have added a new property readOnly to CommentThread to allow hiding the reply button in a comment thread.

A new invalidated event has been added to the protocol. This event signals that some state in the debug adapter has changed and requires that the client (frontend) needs to re-render the data previously requested. Debug adapters do not have to emit the event for runtime changes like "stopped" or thread changes because in these cases the client refetches the new state anyway. However, the event can be used to refresh the UI after rendering formatting has changed in the debug adapter. Debug adapters should only send the event if a true supportsInvalidatedEvent capability was received from the client in the ‘initialize’ request. Mock debug has an example for how to use the event.

We are planning to support "Conditional Exceptions" in a future version of VS Code. Since this requires support in the Debug Adapter Protocol (DAP) we've prepared a proposal for "Conditional Exception" support. If you are a debug extension author and interested in this DAP protocol addition, we'd appreciate your feedback.

Building VS Code with TypeScript 4.1 beta

We now use the TypeScript 4.1 nightly builds to build VS Code. TypeScript 4.1 adds a few new strictness checks, including more strict types for resolve in promises. This improved type checking helped us to identify and fix potential bugs in our code.

We've updated the documentation to help you create a development container. The tutorial now clearly walks you through the steps to create a reusable Docker container to match your development environment. You'll learn how to:

The Microsoft C/C++ extension is now out of preview and version 1.0 has lots of great features:

And check out this video tutorial for configuring C++ IntelliSense in VS Code.

You can read more about this release and the extension's powerful features in this recent blog post.