Update 1.35.1: The update addresses these issues.

Welcome to the May 2019 release of Visual Studio Code. There are a number of updates in this version that we hope you will like, some of the key highlights include:

Over the past two months, we've been working on updating the VS Code product logo. We've taken feedback from the community (thank you to everyone who responded) and we are happy to release the new logos for Stable and Insiders. We are also using same logo on all platforms.

Note: Depending on your platform, you may still see the earlier logo due to the operating system caching the application icon. If you do encounter caching issues, follow these steps to clear your icon cache.

We have polished the Go to Definition action and its friends, Go to Declaration, Go to Type Definition, and Go to Implementation.

Breadcrumbs for quick file and symbol navigation are now on by default. This can be toggled in the View menu View > Show Breadcrumbs command.

VS Code now ships with TypeScript 3.5.1. This update brings TypeScript language improvements, along with tooling enhancements for both JavaScript and TypeScript. It also fixes a number of important bugs, including fixes for performance issues that some users were seeing when working with styled-components.

Smart selection for JavaScript and TypeScript

Use the new Extract to type alias refactoring for TypeScript to quickly extract part type into its own type alias:

The Extract to type alias refactoring has a kind of refactor.extract.type. You can configure a single keybinding that extracts either constants or type aliases using:

See the Code Action documentation for more information on configuring keybindings for refactorings.

As shown in the image below, if you create a function called setTimOut, VS Code will now suggest it first instead of assuming you mean setTimeout.

The terminal now supports programs that use true color (24-bit) escape sequences, rendering the correct color instead of the previous approximation of it.

For some time, there has been a command to select the default shell on Windows. This release makes the command more discoverable as a shortcut available in the terminal selector dropdown.

A new setting merge-conflict.diffViewPosition allows you to open the diff view in a new editor group when you compare merge conflicts. In addition, the new view shows the complete diff view of the changed file, which provides better context for the merge conflicts.

The Remote Development extensions are now available for VS Code Stable and allow you to use a container, remote machine, or the Windows Subsystem for Linux (WSL) as a full-featured development environment. The extensions run in the context of the remote workspace while you work with VS Code just as you would in a local workspace.

Contributed commands can now control their enabled state using a new enablement property. Its value is a when clause, similar to keybindings and menu contributions.

The sample below shows how to add a Hello Enablement command to the editor's context menu and have its enabled state depend on whether text is selected in an editor.

Disabled commands are shown as grayed-out in menus: 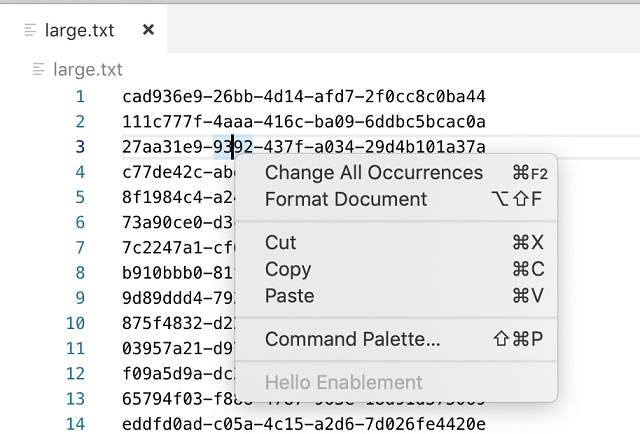 Note that certain menu implementations, like the Command Palette, don't show commands that are disabled. There is also some semantic overlap between enablement of commands and the when clause of menu items. The enablement clause defines the enabled state for all representations of a command while the when clause defines when a command should be included in a menu. For instance, an explorer context menu item might only make sense for certain file types, such as TypeScript files, while enabling that command might depend on another condition, for example "TypeScript server running". You can learn more about commands and menus in the Command Extension Guide.

We have added new icons to the Octicon library:

We have also updated existing icons to be a consistent size:

Note: We also changed the default for $(info) $(smiley) to be a solid version and the previous Octicons were renamed to $(info-outline) $(smiley-outline).

Keep in mind that for a good user experience, webviews should not perform complex operations such as DOM manipulation or network requests while in the background.

We have finalized the Comments API for extensions to provide commenting support within VS Code. For example, the GitHub Pull Request extension uses the Comments API to create and update comments for open pull requests directly in the editor and a dedicated Comments Panel.

You can play with the comment sample extension to get a better understanding of the API or take a deep look at the GitHub Pull Request extension repository.

There is a new command, workbench.extensions.uninstallExtension, to programmatically uninstall an installed extension.

Thanks to Andrew Crawley, the Debug Adapter Protocol better supports hardware-oriented debuggers that need to surface processor registers and memory contents. Both additions are optional, and new and existing debug adapters are not affected. However, if a debug adapter is interested in showing registers and/or memory contents, it can opt into these features. Note that the debugger frontend also needs to add support: Visual Studio plans to support both and we have not yet decided for Visual Studio Code.

Register support for DAP has been retrofitted to the existing "Scope" mechanism: a debug adapter can return a set of CPU registers to the frontend as an additional scope in the scopes request. To mark a scope as a "register" scope, a new optional presentationHint attribute and a value registers has been added to the Scopes type. Using this hint is all that is needed to opt into the feature; there is no corresponding capability.

This feature centers around "memory references." A memory reference is an opaque identifier that can be used (along with an optional byte offset) to identify a single location in memory. A debug adapter has the option of providing a memory reference on DAP responses that represent things a debugger frontend might want to display in a memory view or use as the starting point for disassembly, for example EvaluateResponse and Variable. Providing memory references could be expensive for a debug adapter, so the frontend announces that it can actually use memory references by sending a supportsMemoryReferences capability in the initialize request.

With a memory reference in hand, a debugger frontend can read memory via a new readMemory request and can disassemble source code via a new disassemble request. If a debug adapter implements these requests, it announces this via the two capabilities, supportsReadMemoryRequest and supportsDisassembleRequest.

The proposed DocumentLink.tooltip property allows a DocumentLinkProvider to customize the text displayed when a user hovers over a document link:

VS Code includes instructions on how to activate the link (Cmd+click to in this example) along with the tooltip text.

This is useful if you need an interactive terminal session but don't want to display it to the user unless something goes wrong.

The VS Code Remote Development extensions are still in preview but there is extensive documentation to help you get started.

There are specific topics for each Remote Development extension:

Under the Remote table of contents, you will also find a Tips and Tricks guide as well as FAQ.

Please see our Community Issue Tracking page, if you want to help us manage incoming issues.

There are over 800 Cloud + AI Localization community members using the Microsoft Localization Community Platform (MLCP), with over about 100 active contributors to Visual Studio Code. We appreciate your contributions, either by providing new translations, voting on translations, or suggesting process improvements.