Update 1.33.1: The update addresses these issues.

Welcome to the March 2019 release of Visual Studio Code. There are a number of updates in this version that we hope you will like, some of the key highlights include:

If you'd like to read these release notes online, go to Updates on code.visualstudio.com.
You can also check out this 1.33 release highlights video from Developer Advocate Brian Clark.

Running the Configure Display Language command will now open a Quick Pick listing the available locales based on the Language Packs you have installed, instead of only opening the locale.json file. When you make a selection, the locale will be automatically updated and you'll be prompted to restart VS Code for the change to take effect. 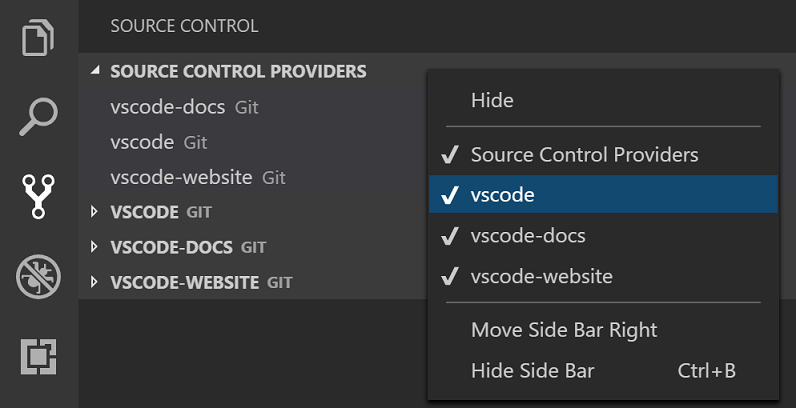 When VS Code detects that a screen reader is being used, it automatically turns on simple keyboard navigation for lists. This makes the list keyboard navigation easier for users with a screen reader since each key stroke will navigate to the corresponding item. This behavior applies for all lists and trees in the workbench, for example the File Explorer, Open Editors, and Debug views.

There are new settings that control the IntelliSense display:

Below is an example of TypeScript IntelliSense with keywords filtered out, no icons, and limited to eight suggestions: 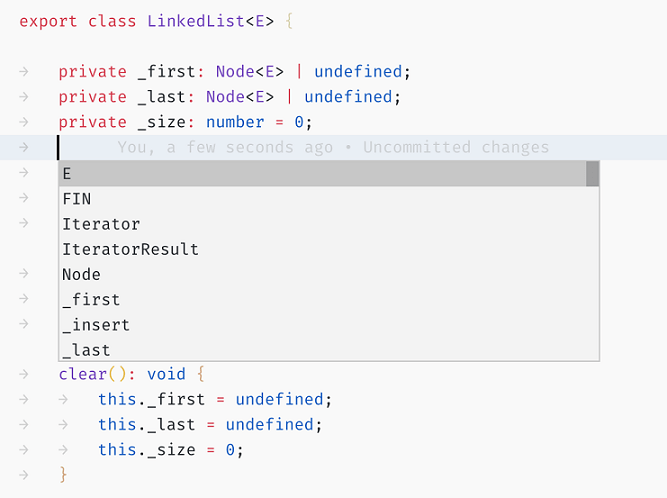 Many of our users work on different projects and often different projects use different document formatters. This has been hard to configure and we have added a new setting to help, editor.defaultFormatter. Now, when there are multiple formatters available, you can define one as the default. In fact, VS Code will encourage you to pick a default formatter.

This will update your configuration (as shown below) so that for subsequent save operations, VS Code knows what formatter to pick. We also encourage you to set this value in your project's configuration. For example, if your project team agrees on a formatter, then it should be spelled out in the project settings file.

Defining a default formatter does not remove alternative formatters. We have added the Format Document With... command, which still allows you to pick a formatter before formatting a document. If needed, you can also reconfigure the default formatter from the dropdown.

It can be set to these values:

There is a new snippet variable that resolves to the name of the opened workspace/folder: $WORKSPACE_NAME.

Use it as shown in the snippet below:

ConPTY turned on by default on Windows build 18309+

For supporting versions of Windows 10 Insiders, the new terminal back-end ConPTY will be turned on by default. This should result in a more stable experience closer to the native terminal and adds 256 color support. If you experience issues, please let us or the Windows Console team know. You can always opt out with this setting:

Previously, the amount of data parsed by the terminal was not being capped properly. This meant that on less powerful hardware, the amount of time parsing data and rendering would far exceed the ideal time to render a frame, resulting in laggy UI or a full lock up for commands that generated a lot of output. There is now a cap in place, which prevents this from exceeding approximately 12 ms, which should avoid these issues.

A new setting, css.completion.triggerPropertyValueCompletion, allows you to disable property value completion. For example, if you choose position from p and have this setting set to false, VS Code will not trigger the static | absolute | sticky | ... completions for the property value.

This is useful if you would like to use Tab/Shift + Tab to select previous and next completion items.

In this milestone, we have added support to display debug sessions as a tree in the debugger UI. Previously debug session were displayed as a flat list, which made it difficult to grasp that sessions were related.

Since this functionality is available via a new extension API, it requires adoption by debugger extensions. In this milestone, the only debugger that makes use of hierarchical debug sessions is VS Code's Node.js debugger.

In Node.js cluster debugging, all subprocesses of a cluster are registered under the main debug session:

In the "server-ready feature" (see below), an automatically launched Chrome browser session is registered as a child of the server debug session.

The last milestone had a preview version of the "server ready" feature, which allows you to open a URL in a web browser automatically as soon as a specific program output message is detected. This feature is useful for debugging web server source code because the URL opened in the browser can make the server hit a breakpoint as soon as the server is ready (and this all with a single F5 key press).

In this milestone, we've moved the feature out of preview. VS Code looks for the trigger message not only in the Debug Console but also in the Integrated Terminal. In addition, we've also improved the error handling.

Note that for technical reasons, it is not possible to support the "server ready" feature in external terminals.

We've improved the extension activation failure notification when VS Code detects a missing extension dependency and now provide an action to install the missing dependency.

In addition, http/https requests from extensions now honor the NO_PROXY environment variable, which lists the domain names separated by commas for which all proxy settings should be ignored.

This is a preview feature and there aren't any extensions currently providing real data for it. However, if you are an extension author, we invite you to validate our proposed API. If you are interested, there is a sample extension for testing: https://github.com/jrieken/demo-callhierarchy.

A new command workbench.extensions.installExtension was introduced to install an extension from the Marketplace or a VSIX.

To install an extension from the Marketplace, you provide its identifier.

To install via a VSIX, you provide its location URI.

For consistency, we are deprecating the menu ID debug/toolbar in favor of debug/toolBar. In the March release, we will support both menu IDs, but in April, support for the debug/toolbar menu ID will be removed.

For consistency, we are deprecating the context sidebarVisible in favor of sideBarVisible. In the March release, both contexts will be supported, but in the April release, support for sidebarVisible will be dropped.

Previously TerminalOptions.shellArgs only supported a list of arguments in the form string[]. This could cause issues on Windows as the string array needs to be converted into the command-line format and the conversion could go wrong or be hard to get right for complicated cases. You can now bypass this conversion process on Windows by using a string in command-line format directly.

In order to support hierarchical debug sessions, we've added an optional argument parentSession to the vscode.debug.startDebugging API. If specified, VS Code shows the debug session resulting from startDebugging in a tree-like way as a child of the parent session.

Every milestone comes with new proposed APIs and extension authors can try them out. As always, we welcome your feedback. This is what you have to do to try out a proposed API:

In addition to ProcessExecution and ShellExecution tasks, there is now a CustomExecution task. Instead of launching a process or running a script, it executes a callback provided by the extension.

This will give an extension provided task more flexibility for maintaining state when the task is run. It also provides access to the input and output for a task. For a complete example, see the test item.

The new interface is available in VS Code Insiders and we will use the April milestone to tune and tweak the API. The old Commenting API will also be removed in April. You can play with the sample extension to get a better understanding of the API or take a deep look at GitHub Pull Requests.

The proposed WebviewOptions.portMapping setting allows extensions to transparently define how localhost ports are resolved inside of webviews.

It is considered good practice to start services like live servers on a random port. With port mapping, a webview's HTML content can use a hard-coded port that is mapped to the dynamically opened port that the service is really running on.

There is a proposed API for a CallHierarchyItemProvider supporting the call hierarchy feature. Try it out, leave feedback, and help us make this good API.

We now fully support distributing Visual Studio Code as a snap package. Snaps work across many different Linux distributions, provide reliable execution environments for a much stabler VS Code, and support background updates. Yes, that's right, you now get in-product automatic updates for Linux just as the Windows and macOS users do. 🎉

Installing the snap package is as easy as:

Are you an insider? Come on and jump over to the Insiders snap package, and get daily updates without any extra work:

Thanks to our friends over at Microsoft DevLabs, we were able to speed up our OSS builds using an Azure Pipelines extension, which caches NPM packages and speeds up the entire npm install process. If you'd like to know more about this, you can read this blog post by Ethan Dennis.

Strict null checking of VS Code

We made a final big push this iteration to enable TypeScript's strict null checking for the core VS Code codebase. Strict null checks help to catch some common programming mistakes and make our codebase more maintainable, so that we can keep moving quickly yet safely.

This milestone we continued working on improvements to the GitHub Pull Requests extension.

Below are some of the new features:

The Vetur extension now supports any workspace version of TypeScript > 2.8, so that users get more consistent language support between *.vue, *.js, and *.ts files.

Read more on these features in the Vetur Changelog.

The new Remote Debugging for Node.js topic explains how you can connect the VS Code debugger to your Node.js applications running on Azure with the Azure App Service extension.

Contributions to our issue tracking. Please see our Community Issue Tracking page, if you want to help us manage incoming issues:

There are over 700 Cloud + AI Localization community members using the Microsoft Localization Community Platform (MLCP), with over about 100 active contributors to Visual Studio Code.

We appreciate your contributions, either by providing new translations, voting on translations, or suggesting process improvements.