We are releasing 1.7.2 today which includes a new version of the TypeScript Server (to 2.0.10). The update to the server will re-enable the Automatic Type Acquisition (ATA) feature by default for JavaScript users. This feature greatly improves the IntelliSense in JavaScript projects and removes the need to manually install TypeScript declaration files (.d.ts files). This feature is powered by a query to the npmjs service to retrieve relevant declaration files for used modules. More details in relation to this feature, including details on how to disable it are included in the relevant section of these release notes.

We are releasing a 1.7.1 recovery build to disable the automatic JavaScript typings file acquisition feature. We need to tune the acquisition to avoid unnecessary load on the NPM registry and we're working closely with the TypeScript and npmjs.org teams. We expect to enable this feature in a future release.

If you're curious about the details, you can read our blog post describing the event and NPM and VS Code's mitigations.

Welcome to the October release of Visual Studio Code. There are a number of significant updates in this version that we hope you will like, some of the key highlights include:

You can now change the layout of editor groups to be either vertical or horizontal. Both layouts behave the same as before allowing you to move and resize editors and editor groups. 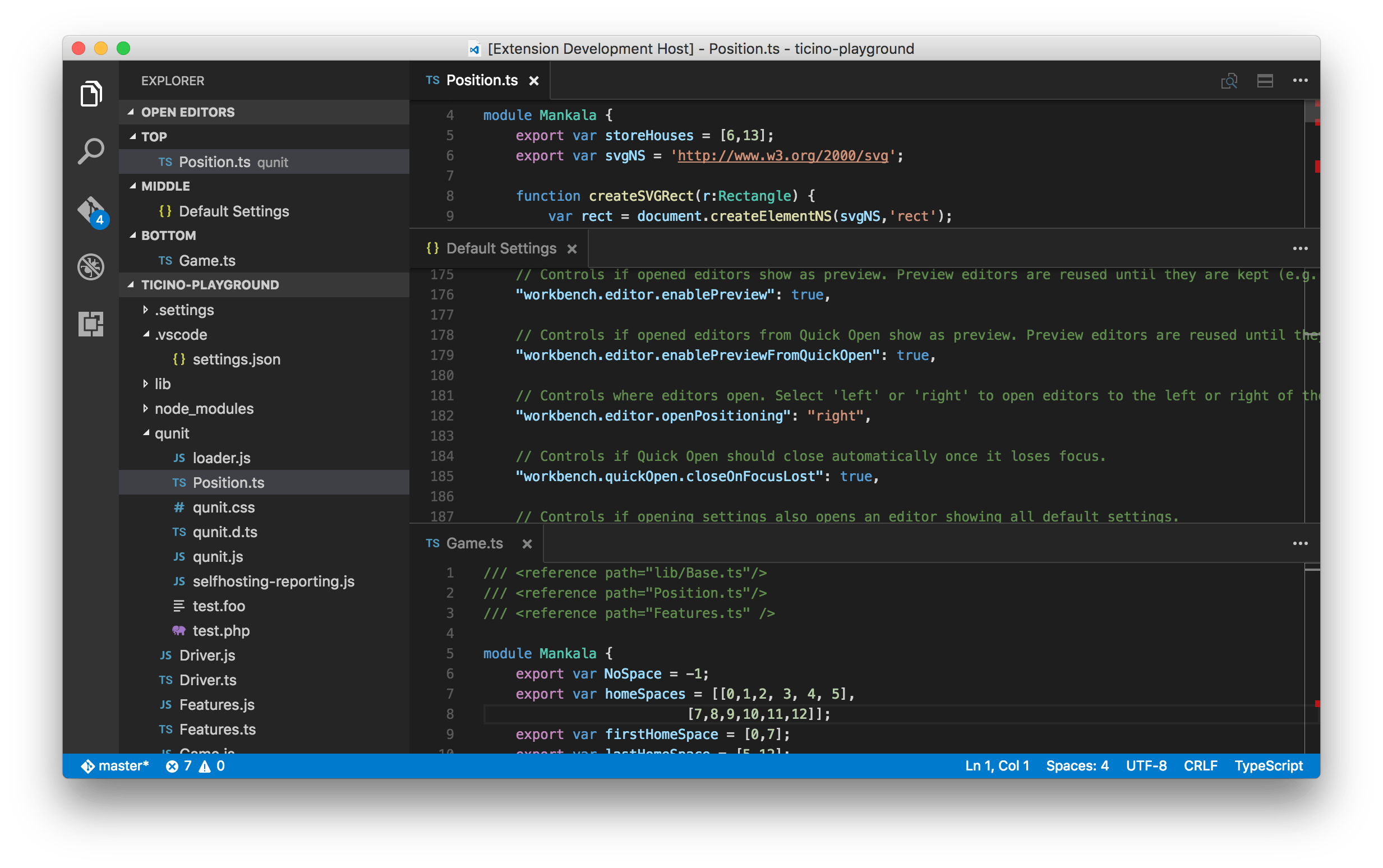 To enable horizontal layout for the current workspace, use:

There is also a keyboard shortcut (⌥⌘0 (Windows, Linux Shift+Alt+0)) to quickly switch between the two layouts.

Once you made your choice for the layout, we persist it for the current workspace and restore it after restart.

We have introduced a global workbench command that maximizes the size of the panel (80% of the total height). If the panel is already maximized, this command will shrink the panel to its previous size. This is really handy when you have lots of output to review quickly. This command is not currently bound to any keyboard shortcut but you can add easily your own keybinding.

We changed some of the toggles in the View menu to update your user settings file instead of persisting their state in the browser. This will make it easier to restore the same state on a different machine by copying the settings file.

The following settings will now be changed in your user settings file when you change them from the View menu:

In addition, changing the Zoom level from the View menu now writes to window.zoomLevel.

Help > Keyboard Shortcuts Reference brings up a printable PDF reference sheet of VS Code command keyboard shortcuts. Keep this reference handy and you'll be a VS Code power user in no time.

Here's it is for macOS: 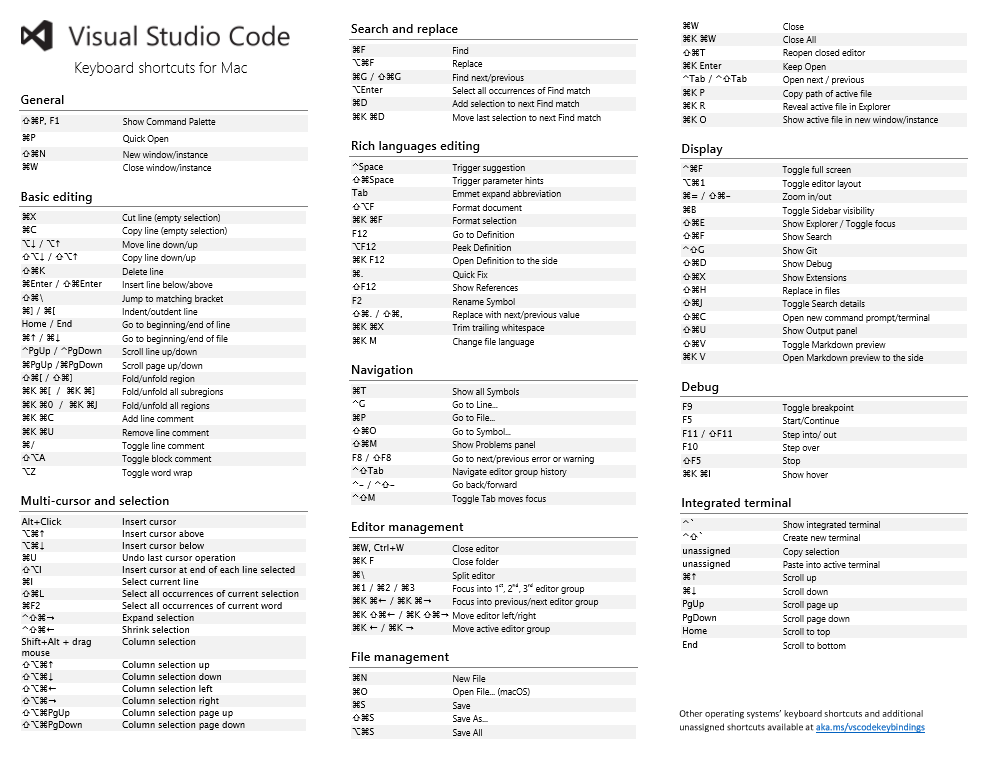 Below are links to the three platform-specific versions: 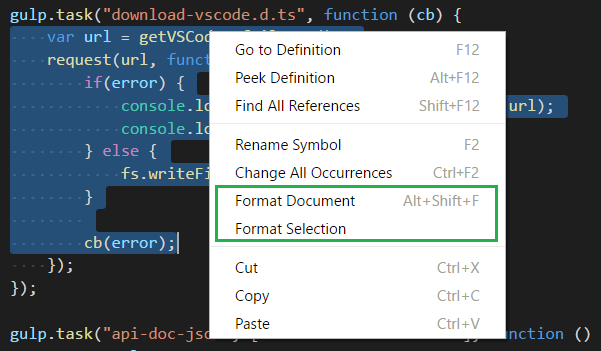 We also added new configuration options to enable/disable the default formatters for JavaScript, TypeScript, JSON, and HTML. Use these options when you have another extension installed that provides formatting for the same language.

We've added a new Formatters category to the Marketplace so you can easily search and find source code formatting extensions.

Note: This feature was disabled in the 1.7.1 build. Read on to learn what's coming in a future release.

VS Code uses the TypeScript language server to provide IntelliSense in JavaScript files. In the past, you had to create a jsconfig.json file. You also had to manually install typings (Type Declaration) files for all the modules and libraries you were using. That's not an easy chore, particularly when you are a pure JavaScript developer.

We talked with our friends on the TypeScript team and they came up with "Automatic Type Acquisition". ATA makes typings files almost invisible. A TypeScript language server that has ATA enabled watches your package.json files and automatically installs the typings files of all dependencies in a cache on your file system. It does the same when it finds references to well known client-side libraries. When you then invoke IntelliSense, the TypeScript server uses the typings files in the cache. The cache is shared between all your workspaces. Without a jsconfig.json file the TypeScript server assumes that everything in your workspace belongs to the same project.

We think this is so cool that we wanted you to get your hands on it as soon as possible. Our integration of ATA is still rough around the edges, but we decided to enable it by default. Should you experience issues, you can switch it off by setting typescript.disableAutomaticTypeAcquisition to true in your user settings.

Here are a few points you should be aware of when using ATA:

You can now see CSS language features like code completion, validation and color annotation for CSS styles embedded within your HTML. 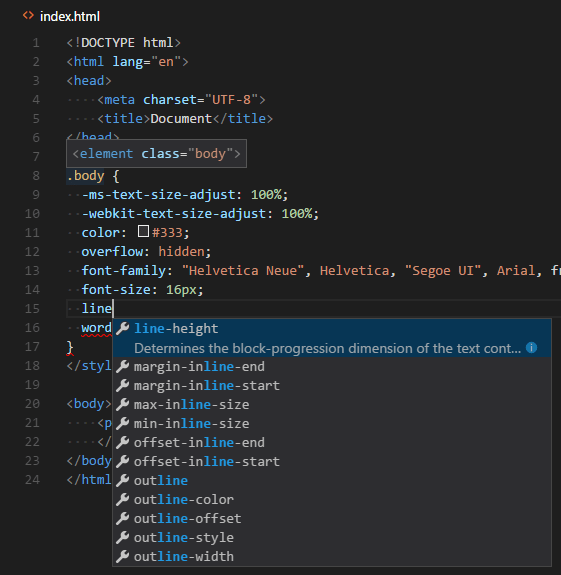 The main goal was to tackle as many of reported issues as possible. Additionally, we wanted to provide a better experience with existing color themes by generating scopes closer to what other popular JavaScript grammars such as the Atom grammar do, while still supporting features like the JavaScript React syntax.

Note: If you have already been helping us testing the latest grammar using the Latest TypeScript and JavaScript grammar extension: You can uninstall that extension now.

The vscode-eslint and vscode-tslint extensions now provide settings to automatically correct fixable warnings on save.

Note: This setting is ignored when files.autoSave is set to afterDelay.

Keyboard shortcuts are vital to productivity and changing keyboarding habits can be tough. To help with this, we added two new extensions and introduced a new category Keymaps to the Marketplace. The purpose is to make it easier to switch between editors by removing the need to learn new keyboard shortcuts.

We built an extension for Atom and Sublime Text. We found some of the most popular keyboard shortcuts and would like your feedback on what we're missing. If we missed a keyboard shortcut, please open an issue or make a PR in the repo. 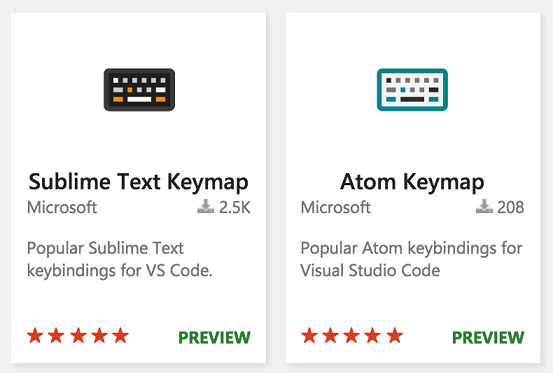 Additionally, you can create your own keymap extension using the keybindings contribution point and adding it to the Keymaps category.

Many extensions exist that contribute source code formatting functionality. Some of the most popular formatters have more than 100K installs! We wanted to make it easier for you to find formatters so we added a new category to the Marketplace called, naturally, Formatters. Search on the Marketplace and install a Formatter today.

Here are a couple of our favorites: 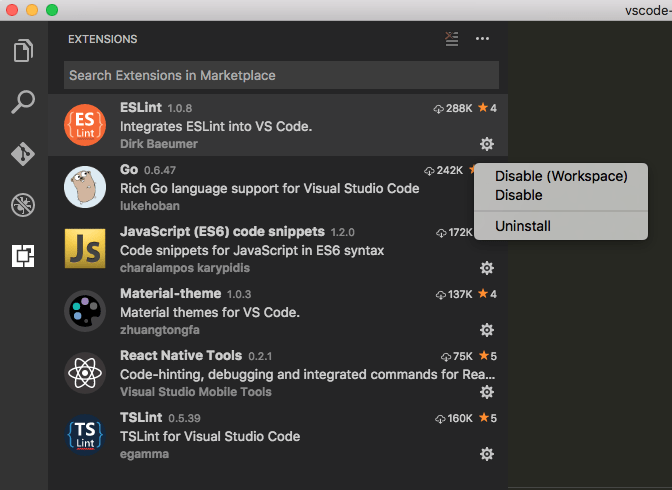 You can also disable or enable all extensions with few clicks from VS Code. 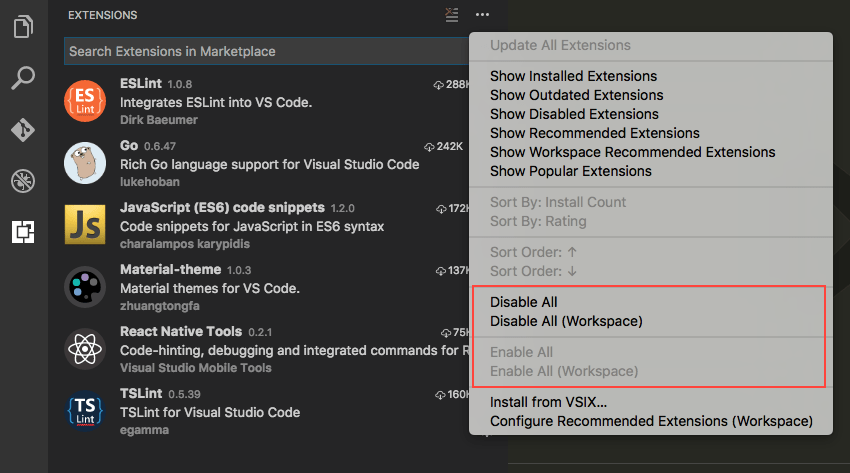 Last release we introduced 'Extension Packs' which are extensions that depends on other extensions. In this release, we added a new tab to the extension editor to show these dependencies which gets installed when installing the pack.

When you uninstall an extension pack, all its referenced dependency extensions are also uninstalled.

In order to make setting up Node.js debugging as easy as possible, we've tried to simplify the initial 'launch.json' experience: 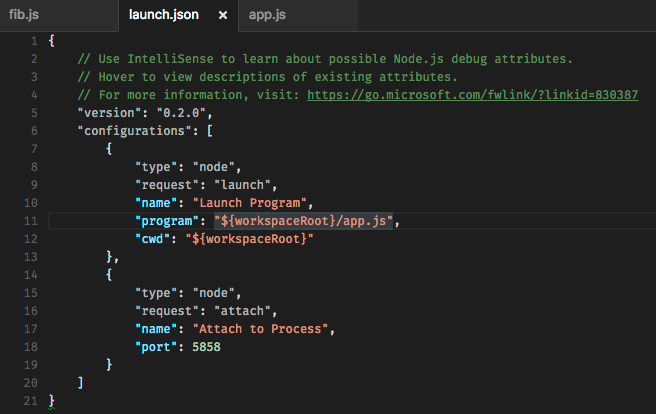 Note: Since we are only able to change the built-in Node.js debugger of VS Code, we are relying on the authors of the other debug extensions to do something similar (if needed).

Whether a 'hit count condition' is respected and how the exact syntax of the expression looks like depends on the debugger extension used. In this milestone, only the built-in Node.js debugger supports hit counts (but we hope other debugger extensions will follow soon).

The hit count syntax supported by the Node.js debugger is either an integer or one of the operators <, <=, =, >, >=, % followed by an integer.

The October release contains an early implementation of 'multi target debugging', that is multiple debug sessions can be active at the same time within a single instance of VS Code (and a single project folder).

This feature helps with the following scenarios:

We have introduced the following new settings:

API related implementations which return MarkedString | MarkedString[] have changed semantics. Each MarkedString will be visually separated from the others with a horizontal line. Both the HoverProvider and Decoration APIs are affected by this.

You can now display your extension's CHANGELOG.md directly in the extension details view.

We recommend extension authors move any existing changelogs from their extension's README.md to a separate CHANGELOG.md file. Similar to README.md, if the CHANGELOG.md is placed in the extension's workspace root, it will be automatically included by the vsce publishing tool.

We added an additional place where extensions can contribute menu entries, the context menu of an editor tab (this also works when tabs are disabled). The related menu path for contributing here is editor/title/context.

We added an onDidChangeVisibleTextEditors event which fires whenever the list of visible editors changes.

As ever, the latest and greatest version of our extension API is defined in the vscode.d.ts file.

Note: when you update your extension to use an API version 1.7.0 or newer, make sure you use the latest version of the vscode-node-module (^1.0.3) and make sure to use TypeScript 2.0.

Please read here to learn how to migrate your existing extensions to the latest vscode module.

Our team maintains or contributes to a number of VS Code extensions. Most notably: