It took us 2 weeks longer than originally anticipated, but now it's here: The 1.5.3 release is our August release fully translated into the 9 supported languages.

We are releasing a 1.5.2 recovery build to fix several important issues:

To fix an issue when the editor.fontSize is set to 0, we're releasing a 1.5.1 recovery build.

The VS Code team was hard at work during August and we are happy with the release and we hope you like it too. There are key updates to the UI, extension support, debugging and the extensibility APIs.

Here are some highlights:

Note: We had planned to ship 1.5 fully translated. Unfortunately, there are some delays with the translations and we do not want hold this release. We will ship an update with all the translations soon.

By default, no file icon set is configured and the File Explorer doesn't render icons. Once a File Icon Theme is selected, the choice will be persisted and used again on restarts of VS Code. In this release, file icons are only shown in the File Explorer, but we plan to use file icons in other places, for example in Editor tabs.

VS code ships with two icon themes and we expect the community to contribute many more themes.

Credit goes to Jesse Weed and all contributors to the popular Seti UI theme for the fantastic Seti UI icons and to Roberto Huertas for implementing an icon extension that made very clear how many of our users wanted icons.

A new setting terminal.integrated.commandsToSkipShell was added that contains an array of commands that skip processing by the shell and instead are processed by VS Code's key binding system. This allows keys such as F1 to now work while focus is in the terminal.

There are several useful Editor settings in this release:

Auto Save when application loses focus

You can now configure Auto Save (files.autoSave setting) with the new value onWindowChange to trigger save automatically when switching windows.

Quick Open got a lot quicker

Over the last two iterations, we looked into making Quick Open fast, even for large workspaces ('large' as in 'Chromium-repository-large'). A newly cloned Chromium repository contains more than 220,000 files. On our development machines, Quick Open went from around 30s in VS Code version 1.3 to around 3-4s (depending on your platform) in version 1.5. This is the performance without any caches. However we do use caches and with those, it takes around 0.5s to get the results. Since we start updating the caches immediately when the user invokes Quick Open and don't block the UI thread when we read from the caches, the 0.5 seconds is the perceived end-user performance even when the caches were out-of-date. As said, this is for the large Chromium repository. If your projects are smaller, you may not see any delay now.

Keep Quick Open visible even when focus is outside

We added a new setting workbench.quickOpen.closeOnFocusLost to control if Quick Open should close when focus moves out of the widget. By default, Quick Open will close, but you can set it to false to stay open even when focus is outside of VS Code.

We added a new setting search.quickOpen.includeSymbols to control if symbols should appear in Quick Open file searches. Previously, we included symbol results in the general file picker but this had enough issues that we decided to make this optional. If you want the symbol results back, please set this option to true. Note that enabling this setting will make the overall file search speed slower depending on the time it needs for the global symbol search to return results.

New actions to move Tabs left or right within a group

There are new actions to move a Tab (tabbed header) left or right within a group of editors.

The two actions and their default key bindings are:

We always provided an action to reopen an editor after it was closed, workbench.action.reopenClosedEditor (⇧⌘T (Windows, Linux Ctrl+Shift+T)). With this release, editors will now reopen at the same index, preserving the order that existed before they were closed.

We decided to remove an (undocumented) key binding to bring up quick open for file search. You can bring back Cmd+E with the following key binding configuration:

The reason behind this change is that Cmd+E on Mac OS is typically associated with running a search in the current active file.

We bundle the officially released version of TypeScript with Visual Studio Code. For the August release, this will be version 1.8.10. During September, the version 2.0 will become available and you can already install the release candidate using npm install -g typescript@rc. Using a different version of TypeScript inside VS Code as on the command line or by a build tool is confusing, since you will get different errors. 2.0 supports features that are not supported in 1.8.10. If you want to use the newer version of TypeScript inside VS Code then please use the typescript.tsdk setting and refer to the corresponding documentation.

VS Code now checks if the workspace folder contains a custom TypeScript version (typically installed via npm install typescript@x.x.x). If this is the case and the typescript.tsdk setting isn't used, then VS Code informs the user about the local version and ask whether the local version should be used.

The More Information action takes you to documentation for how to configure VS Code to always use a locally installed TypeScript version. VS Code now also checks whether the used TypeScript language server is different than the globally installed tsc compiler. When this is the case, a corresponding information message is shown.

New settings have been added to control which built-in code completion providers are active. Use these settings if you prefer not to see the corresponding proposals.

The LESS syntax validation has been brought up-to-date to support some of the features recently added to LESS. These include:

Check out the LESS documentation to learn more about these features.

Settings to enable/disable Emmet for languages

You can now associate existing Emmet syntax profiles (such as html, css) with other languages with the new emmet.syntaxProfiles setting. The setting takes a language Id and associates it with an Emmet profile.

For example, to use Emmet HTML abbreviations inside JavaScript:

You can disable Emmet abbreviations for a particular language using the emmet.excludeLanguages setting. The setting below disables Emmet in PHP files:

The vscode-eslint and vscode-tslint extensions now provide settings to run the linter only on save and not while typing.

There is now an action to Update All Extensions. 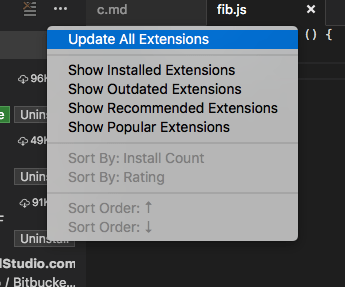 Additionally, there is now an extensions.autoUpdate setting which, when set to true, will let extension automatically update themselves without user intervention.

When browsing extensions in VS Code, there is now a Contributions section which will display each extension's contributions, even before installing the extension.

You can now sort extensions not only by install count, in the extensions view:

The Marketplace has been revamped with a CDN, in order to improve download times and availability for extension queries and downloads.

The Debug Console now shows suggestions while typing. Currently this is only available for Node.js debugging, but other debuggers can implement suggestions as well through the debug protocol. 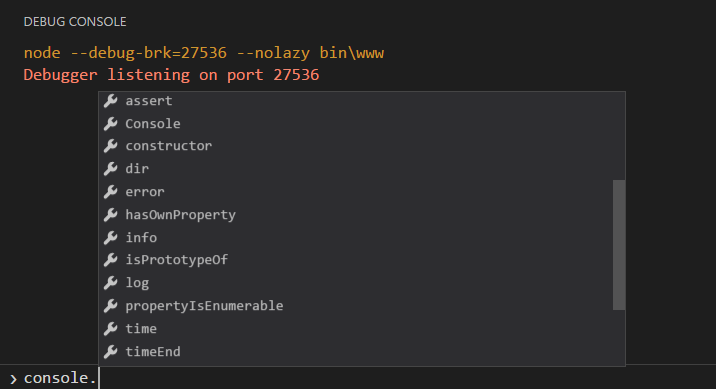 The Debug Console input now expands to multiple lines when needed. The expansion can be triggered using Shift + Enter. 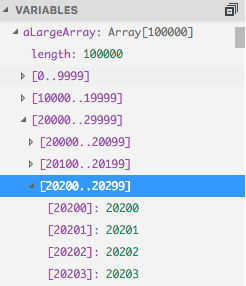 It is now possible to launch the Node.js debug target in the Integrated Terminal which helps when developing Node.js based command line applications that read from an interactive terminal and/or need to control their output on the terminal they are running in. 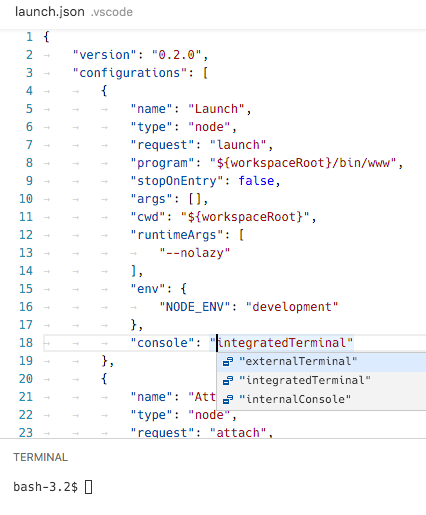 For the VIM extension to make good progress on their roadmap particularly on window scrolling and folding, we added the following editor APIs:

When showing Quick Open or asking for input, you can provide the ignoreFocusOut option so that the dialogs will not close when focus moves to another part of VS Code or another window. Also, you can now programmatically close them using a cancellation token.

In this release, we exposed the following internal colors as TextMate theme settings and now theme writers can customize them with their themes.

An API has been added that provides extensions with some basic control over the integrated terminal like creating terminal(s) and sending text to them. See the window API reference page for a full description of the API.

Additions to the Debug Protocol

The debug protocol has been extended in the following areas (and VS Code already provides the corresponding UI):

Originally started with PR #9791 from Manoj Patel (@nojvek), we now have test coverage for our TypeScript files updated on each build.

We will create monthly releases of the "Monaco" Editor, in the same rhythm with VS Code. You can see the change log here.