Update 1.27.2: The update addresses these issues.

Welcome to the August 2018 release of Visual Studio Code. There are a number of significant updates in this version that we hope you will like, some of the key highlights include:

If you'd like to read these release notes online, go to Updates on code.visualstudio.com.
You can also check out this 1.27 release highlights video from Cloud Developer Advocate Brian Clark.

Over the past few months, we've been developing a GUI for editing settings. In 1.27, we are making it the default settings editor. 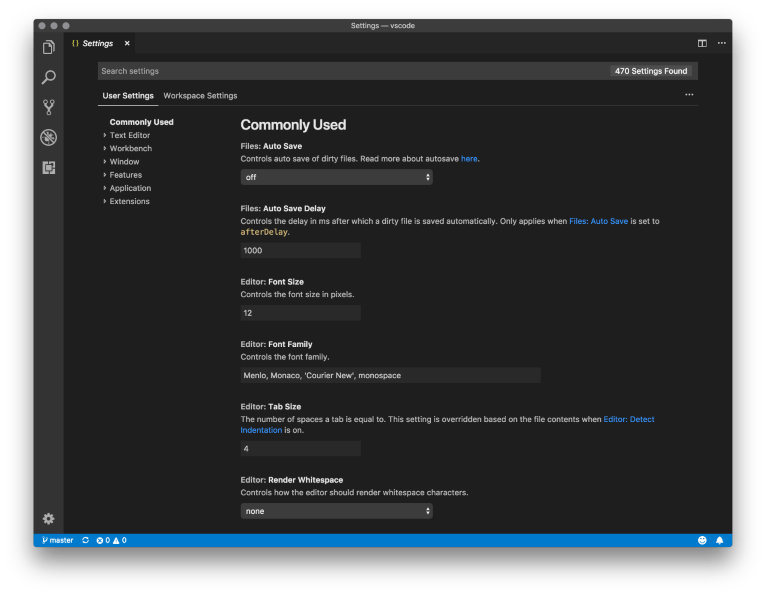 You can still access the JSON settings editor, either by using the command Open Settings (JSON) or by changing your default settings editor with the "workbench.settings.editor" setting.

One improvement we made this month is to clean up the UI by moving setting value descriptions (enumDescriptions) into a custom dropdown control: 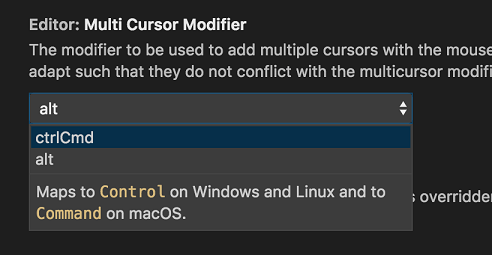 Settings that have been modified are now indicated with a blue line, like modified lines in the editor. The gear icon opens a context menu with an option to reset the setting to its default value.

Setting values are now validated, and any validation errors are displayed.

When you search in settings, our Bing-powered search service is still providing results that it thinks are relevant. Now, that service will also show you extensions from the Marketplace that have relevant settings. You will see a button at the bottom of the settings search results, Show matching extensions. When clicked, the Extensions view will open with the matching extensions. 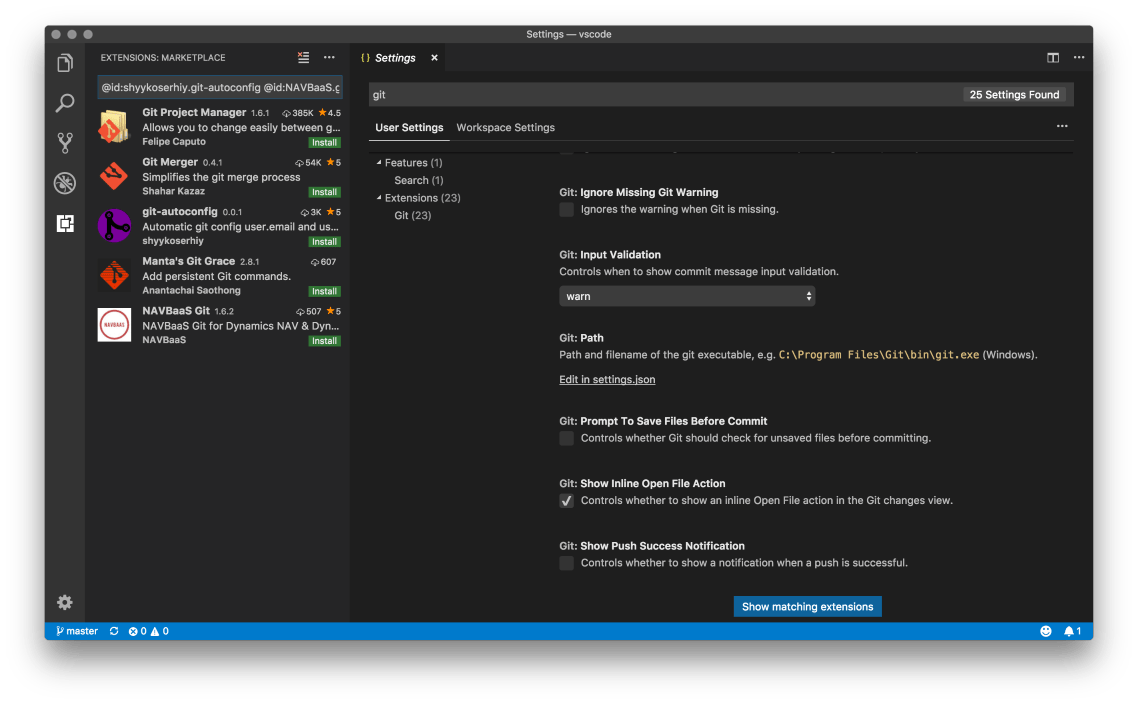 Custom title bar and menus on Windows and Linux

Also over the past few iterations, we have been working to improve the look and feel as well as usability of the title bar and menus on Windows and Linux. This iteration, we are removing the preview label with an aim to make this the default experience on Windows soon. To enable this feature, you can set the setting "window.titleBarStyle" to "custom".

The new experience comes with several advantages over the default:

As we want to make this new experience the default on Windows, we encourage you to try it out and send us your feedback so we can provide the best possible experience.

We have tweaked the new breadcrumbs bar, made various improvements, and fixed bugs:

The Tasks menu was renamed to Terminal and some more entries for the Integrated Terminal were added. 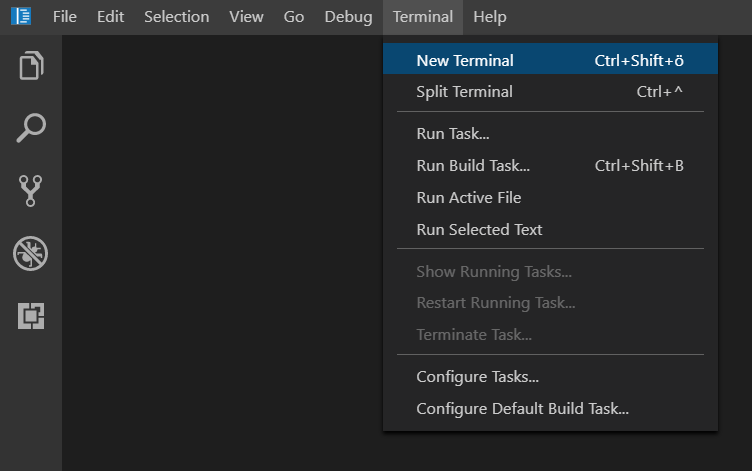 It's now possible to enable keyboard shortcuts for specific operating systems using isLinux, isMac and isWindows within a keybinding's when clause:

This makes it much easier to share your keybindings.json file across different machines.

A new macOS-only command, workbench.action.newWindowTab, opens a window as new native tab. newWindowTab does not have a default keybinding and needs the setting window.nativeTabs to be enabled.

We changed the default of the workbench.editor.closeOnFileDelete setting from true to false. This means that a file that has been deleted or renamed outside of VS Code (or by another program like Git or command from the Integrated Terminal) will no longer close a file that is opened as editor tab. Instead, the file will indicate that it has been deleted from disk and you can just save the file to restore it.

Note: Unless the file is dirty, the contents of the file are not preserved between restarts.

Middle click to open file in a new editor

Now it is possible to use the middle mouse click in the Explorer view to open a file in a new editor and not reuse the previous editor in preview mode.

We have fixed quite some accessibility issues - mostly around keyboard navigation, screen reader support, and focus. The full list can be found here. This is an ongoing effort which we plan to continue in September.

We've done some stability work on our custom Windows background updater, in order to address issues resulting in broken installations for some users. This is a continuous work item with more improvements in upcoming releases.

When typing certain brackets like {, [ or (, depending on the programming language, they will get auto-closed by default when they are followed by specific characters that typically cannot start an expression, for example ;:.,=}])>. This behavior can be customized with the editor.autoClosingBrackets setting. Similarly, it is possible to customize the auto closing behavior while typing quotes like ", ' or ` with editor.autoClosingQuotes.

When text is selected and you type one of these characters, the selection will be surrounded by brackets or quotes. It is now possible to adjust this behavior separately via the new editor.autoSurround setting.

Jump to definition for CSS links

There is now jump to definition for @import and url() links in CSS, SCSS and Less.

The most interesting addition are the if, then, else keywords to allow conditional schema evaluation.

The if keyword means that, if the result of the value schema passes validation, apply the then schema, otherwise apply the else schema.

The HTML formatter has been updated to version 1.8.1 of JS Beautifier.

This adds a new option to the "html.format.wrapAttributes" settings:

VS Code now ships with TypeScript 3.0.3. This minor release fixes a number of bugs and improves stability. You can read about the complete set of changes here.

For more than a year, the Loaded Scripts Explorer in the Debug view was contributed by the Node.js debug extension and was not available to other debuggers. In this release, we've added the Loaded Scripts view as a built-in debugger feature. All debug extensions that have the notion of "scripts" will be able to support access to their scripts in a dynamically updated view.

In addition, we've improved some shortcomings of the old Loaded Scripts Explorer:

Now it is possible to use the middle mouse click in the breakpoints view to easily remove a breakpoint.

Change the default for "openDebug" to open on every session start

For new users, it can sometimes be confusing when you start a debug session and the debug view does not open automatically every time. If the user is not yet familiar with the UI, they don't know what keywords to look for in order to open the UI. To avoid confusion, we changed the default of debug.openDebug to be openOnSessionStart so that the debug view opens on every session start, not only on the first (which was the previous default behavior).

The ExtensionContext that comes as an argument of the activate function has a new property logPath. This is the absolute file path of a directory where extensions can store log files. The path is unique for an extension and not reused by other extensions.

A new version of the Language Server Protocol is available and includes the corresponding node modules for use with VS Code.

The new version has support for:

Previously, when building Language Server extensions using vscode-languageclient, you could specify [langId].trace.server to send LSP logs into a VS Code output channel.

This opens up interesting use cases, such as streaming LSP logs into an LSP Inspector to visualize the behavior of a Language Server:

You can learn more about it in Microsoft/language-server-protocol-inspector and lsp-log-streaming-sample.

The Loaded Scripts Explorer is now a built-in component of the VS Code debugger. In order to use it, a debugger extension needs to change its debug adapter in the following way:

There is a new theme color for breadcrumbs:

There are new theme colors for the settings editor:

The Git extension has started to expose a more defined API. This API can be used from any other extension to interact the open Git repositories in a user's workspace. Since it is still in its preliminary stages, we will continuously improve the API in the upcoming releases.

In order for extensions to know which source control instances have been selected by the user for visibility in the UI, SourceControl instances now have a selected property as well as a onDidChangeSelection event which represent that state.

We are introducing the concept of comments this iteration, which allow extensions to create and manage conversations within editors and a new Comments panel. This enables extensions to support code review scenarios.

Comments are organized into threads and associated with a particular document.

Using the DocumentCommentProvider, comments can be returned for open documents. When providing comments, the extension specifies both the current threads on the document, and what range of the document supports adding new comments. Comments can be added or replied to from within the document. 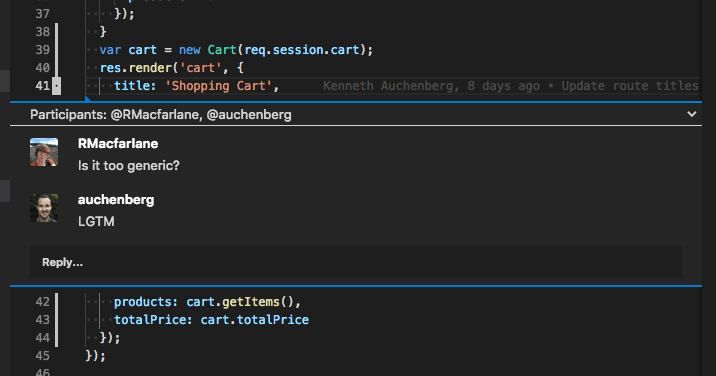 When a WorkspaceCommentProvider is first registered, the CommentsPanel becomes visible and shows all comments provided to it. Comments are grouped by comment thread and resource. When a comment is selected in the panel, the comments command is run, so the extension determines the behavior.

During this milestone, we explored bundling Electron 3.0.0 into VS Code. This is a major Electron release and comes with Chrome 66 and Node.js 10.x (a major leap forward compared to our current version that has Chrome 61 and Node.js 8.x). We plan to push out the update to our Insiders users in the near future to gather additional feedback. If you are interested in helping out, make sure to install VS Code Insiders.

We are now using webpack to bundle extensions. It unlocks two achievements: (1) reduce the startup time for extensions because there are fewer files to load and less source to parse and (2) reduce the install time because fewer files need to be extracted and written to disk. So far, we've reduced the bundle size by ~4000 files!

We have added a test harness to ensure that our startup performance isn't regressing. There is a new script that can be deployed to dedicated machines to test the performance of Insider builds. The script simply installs the latest build and makes sure that it starts within a time limit. For now, we started with Windows because performance is often affected by updates to anti-virus software but the plan is to test on all platforms we support.

We've improved our homegrown IPC stack to support byte buffer messages between processes. This enables certain scenarios such as sending binary data between our different processes without overhead as well as allowing us to optimize IPC for performance.

There are almost 1200 members in the Transifex VS Code project team with about 100 active contributors every month. We appreciate your contributions, either by providing new translations, voting on translations, or suggesting process improvements.