Update 1.23.1: The update addresses these issues.

Welcome to the April 2018 release of Visual Studio Code. This milestone the VS Code team has been focused on API work to support extension authors, but there are still plenty of updates in this version that we hope you will like. Some of the key highlights include:

If you'd like to read these release notes online, go to Updates on code.visualstudio.com.
You can also check out this 1.23 release highlights video from Cloud Developer Advocate Brian Clark.

Insiders: Want to see new features as soon as possible? You can download the nightly Insiders build and try the latest updates as soon as they are available.

VS Code can now highlight the active indent guide, as you move your cursor between various source code blocks.

The highlight color name is editorIndentGuide.activeBackground, which you can modify in the workbench.colorCustomizations setting:

Run Code Actions on save

The new editor.codeActionsOnSave setting lets you configure a set of Code Actions that are run when a file is saved. For example, for JavaScript, TypeScript, and other extensions that contribute an organize imports Code Action, you can enable organize imports on save by setting:

You can also enable or disable which Code Actions are run on save per language using a language specific setting. The following settings enable organize imports on save for TypeScript files only:

In VS Code, column (box) selection can be added by holding Shift and Alt and then using the left mouse button. Now the middle mouse button can also be used to create a column selection:

Note: When setting editor.multiCursorModifier to ctrlCmd, the modifiers are Shift and Ctrl on Windows and Shift and Cmd on macOS.

VS Code always supported the UTF-16 encoding for files but required a BOM (byte order mark) to properly detect this encoding. If VS Code didn't find a BOM, the file would not be opened and the user saw an information message.

With this release, we added a new action to this message to open the file as text in the editor:

Once opened, you can then change the encoding to try to decode the text.

In addition, VS Code now uses a heuristic that tries to detect UTF-16 without a BOM automatically. This heuristic should work for all UTF-16 files that contain only ASCII characters.

You can now include or exclude files in the Problems view using filters.

The short video below shows filtering the project out directory based on the files.exclude setting and ignoring all node_modules by typing !**/node_modules/** in the filter input box:

With the setting npm.enableScriptExplorer, you can enable an explorer that shows the scripts defined in your workspace. 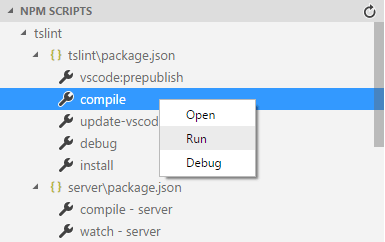 Use the npm.exclude setting to exclude scripts in package.json files contained in particular folders.

There have been several improvements to the Git clone workflow. When running the Git: Clone command:

The search results tree context menu includes three new options: Copy, Copy Path, and Copy All. This was a highly 👍'd request which will make it easier to share or export your search results.

Return of the separate search include and exclude input boxes

Last month, we merged the include and exclude input boxes in the Search view in an attempt to simplify and streamline it, while also saving a little vertical space. However, we heard from many of you that this didn't fit with the way you were using the Search view. Eventually, we decided to simply revert the change and so with this release, we are back to having separate include/exclude boxes as we had before 1.22. Note that you don't need to use ! on patterns in the exclude box. 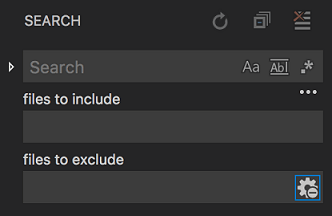 Extension authors can now add their own view containers to the Activity Bar. Depending on your installed extensions, after an update you may see UI such as custom explorers move from the File Explorer to a new custom view container. For example, below you can see that the explorers from the Azure App Service and Azure Databases extensions have moved to a dedicated Azure view. 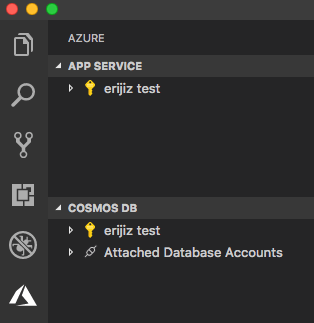 Use the Developer: Open Process Explorer command or Help > Open Process Explorer menu item to open a new window that contains continuously updating information about running VS Code processes. Processes are listed with their CPU and memory usage, PID, and friendly name, and can be killed from a context menu that appears on right-clicking.

You will now be able to select the folder to split the terminal into when inside a multi-root workspace. The old behavior can be reenabled by keybinding the workbench.action.terminal.splitInActiveWorkspace command.

Previously, VS Code would show an "Unknown Property" error for some experimental CSS properties, such as backdrop-filter:

You would either have to turn off CSS linting completely or endure this error, even if you are using CSS frameworks such as PostCSS that allows you to use experimental CSS properties.

In this release, with data sourced from Mozilla Developer Network, VS Code now identifies 87 new CSS properties. If you can find a CSS property on MDN, VS Code should recognize it.

Furthermore, with data from MDN, VS Code now provides enhanced completions in CSS/SCSS/Less, showing the syntax and status value of each CSS properties.

Although there is no built-in support for validating CSS property values yet, the CSSTree validator extension also uses data from MDN and offers linting for each property value based on its value definition syntax:

Markdown now has support for workspace symbol search. After opening a Markdown file for the first time, you can use (⌘T (Windows, Linux Ctrl+T)) to search through the headers of all Markdown files in the current workspace: 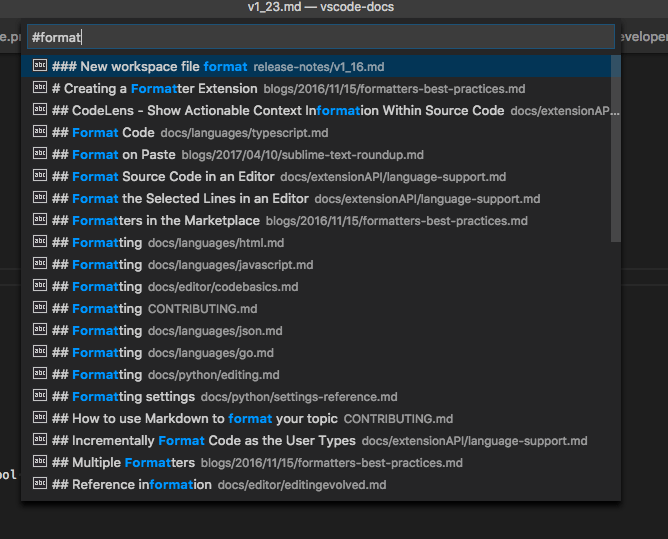 Markdown previews are now automatically restored when you reopen VS Code:

Previously previews had to be reopened whenever you restarted VS Code.

VS Code now ships with TypeScript 2.8.3. This release fixes a number of important bugs.

Logpoints were introduced in the last release and we've improved their ease of use and usefulness:

Contributions to the Activity Bar 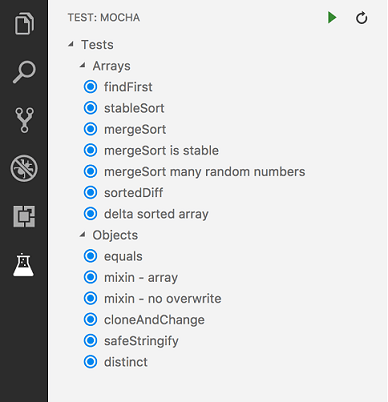 An extension can now define additional activities in the Activity Bar using the contribution point viewsContainers. 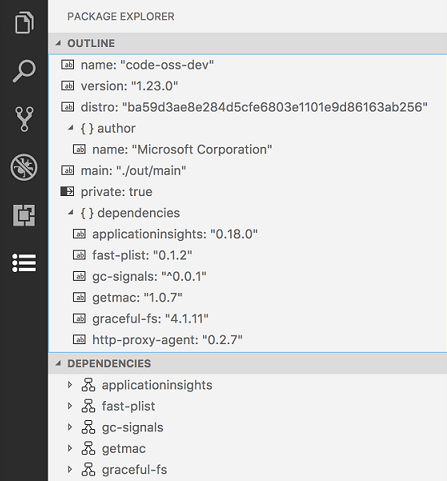 You can now contribute Source Control Management (SCM) related custom views into the Source Control view container in the Activity Bar. You can show, hide and re-order these views just like in the Explorer. 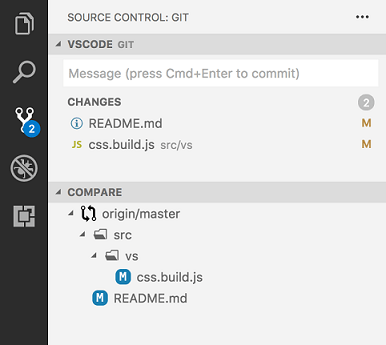 Extensions can now serve files and folders from arbitrary sources, like ftp-servers, and VS Code will handle them just like regular files. To do so, use the FileSystemProvider interface which an extension associates with a URI scheme, like ftp. With that interface, the editor can discover and manage files and folders (create, delete, read, and write). 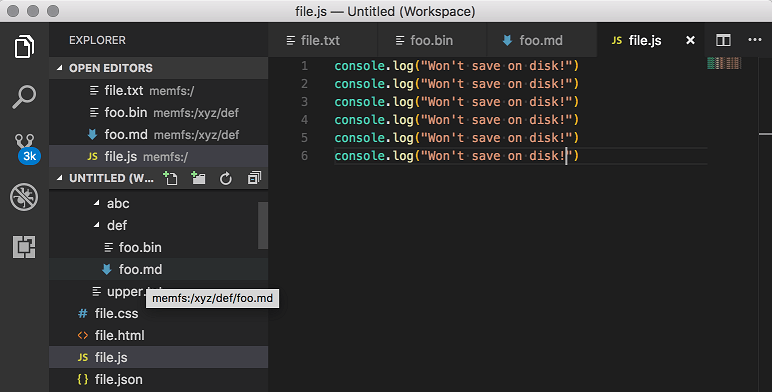 To raise awareness, we have added an information message which shows when you register a language feature using just a language identifier, not a document filter. For more details, visit the Document Selector topic.

Last, there is a sample extension which you can use for testing. It implements a filesystem that keeps everything in memory, nothing is on disk, and you can test your language features against that. Get the extension here.

Due to the addition of FileSystem Providers, we have adjusted the semantics of TextDocument.isUntitled to be true only for newly created documents (using the untitled scheme). Before, all documents not from disk were treated as untitled. This change might alter the behavior of your extension, especially if it assumes that documents that aren't untitled are stored on disk.

We have refined the RenameProvider API and it can now, optionally, implement a new function called prepareRename. With that function, the provider can help VS Code resolve and validate the symbol to be renamed.

Include offset based information in document change events

TextDocumentContentChangeEvent has a new property, rangeOffset, which, together with rangeLength, allows extensions to use (offset,length) coordinates to keep track of text document changes.

CodeActionKind.Source identifies Code Actions that apply to the entire file. Organize imports is a good example of a Source Code Action since it can be triggered from any position in a file.

If your extension already implements organize imports, we highly recommend that you migrate it to use CodeActionKind.SourceOrganizeImports so that users have a more consistent experience across languages.

The webview API allows extensions to create fully customizable views within VS Code. For example, the built-in Markdown extension uses webviews to render Markdown previews. Webviews can also be used to build complex user interfaces beyond what VS Code's native APIs support. 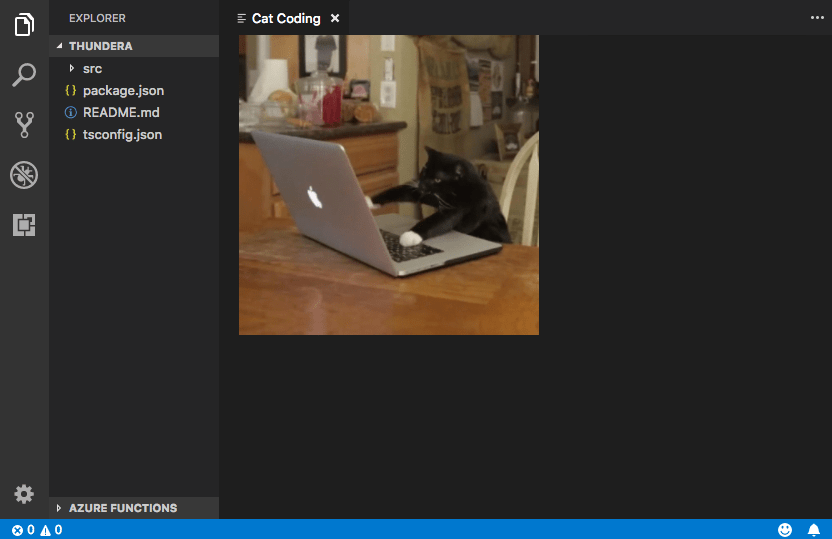 If you want your settings to be applied at application level and not get overridden at a window or resource level, you can do that now by using application scope.

Note: Deprecated isExecutable property in favor of using application scope since it was meant for the same purpose.

This milestone we added several new proposed extension APIs. We plan to add these APIs to stable in a future milestone once we are confident enough with them. We welcome any feedback on how they work for your extension.

Note: These APIs are still proposed, so in order to use it, you must opt into it by adding a "enableProposedApi": true to package.json and you'll have to copy the vscode.proposed.d.ts into your extension project. Also be aware that you cannot publish an extension to the Marketplace that uses the enableProposedApi attribute.

The Integrated Terminal API has several proposed features that can help extension authors access all terminals and also enables multiplexing of terminals across different machines. All terminals can now be accessed via the API, unlike before where an extension could only access terminal which it created:

There's a matching event for this:

You can also hook into the raw data stream coming from the terminal's process, including ANSI escape sequences:

The task API received further polish around task querying and execution from an extension. The newly supported API is:

The API is still in the proposed state.

The Protocol Handler API lets extensions handle system-wide URIs. This functionality is useful for cross-application integrations, since it lets other applications send URIs to specific extensions.

For this API, there is a strict relationship between URI authorities and extensions which will handle them: the URI authority must be the extension's ID (publisher.name). Take the following URI, for example:

This URI's authority is vscode.git, so VS Code will forward it to the vscode.git extension, given that it has properly registered a Protocol Handler.

Since it can happen that URIs are open before extensions are even registered, a new onUri activation event was also introduced. This lets your extension be activated whenever a URI directed towards it is opened.

Note: URI handling is not yet supported in Linux.

Our team maintains or contributes to a number of VS Code extensions. Most notably this month:

The Sublime Text Keymap extension is now able to import settings from Sublime.

The first time the extension is launched, a prompt is shown that displays all your importable Sublime settings. If you want to import your settings at a later time, use the Sublime Text Keymap: Import Sublime Text Settings command from the Command Palette (⇧⌘P (Windows, Linux Ctrl+Shift+P)).

VS Code has always had a smoke test, which is used to keep quality under strict control. We had automated the smoke test yet failed to make it stable. This milestone we worked on improving the stability and performance of the smoke test. More details can be found in pull request #47471.

There were two recent posts on the VS Code blog:

There are over 800 members in the Transifex VS Code project team with about 100 active contributors every month. We appreciate your contributions, either by providing new translations, voting on translations, or suggesting process improvements.