To fix several performance and Git integration issues, we're releasing a 1.2.1 recovery build. You can view the resolved issues here.

The May release of VS Code has some great new features, enhancements to existing features, and a set of important bug fixes.

Here are the highlights:

Please continue reading for more information on what's new in May.

The editor automatically inserts whitespace when you add a new line, based on indenting rules and the previous line's content. Over time, this can result in unnecessary whitespace being persisted in the file. Thanks to PR #5423, the new editor.trimAutoWhitespace setting causes the editor to track the automatic whitespace it inserted and remove it if it no longer is needed, for example by typing somewhere else. Please note, this new setting is on by default.

You can now immediately select all find results by pressing ⌥Enter (Windows, Linux Alt+Enter). This is much quicker than doing a find and replace and leverages VS Code's multi-cursor support. Thanks for PR #5715!

When a language service isn't able to compute semantic completion (suggestions), VS Code defaults to word based completions. This is why for some languages you see an IntelliSense list with every word in the file. Some folks would prefer to not see this list at all so you can now disable word based completions with the editor.wordBasedSuggestions setting.

The Peek view editor that shows for reference search and for previewing declarations can now be resized!

Note: Support for Tabs is not in the 1.2.0 (May 2016) Stable release. You can preview the experiences below by using the Insiders Release of VS Code.

Tab support is the number one User Voice request. While the full implementation will take multiple iterations to fully deliver, we wanted to share progress made during the May iteration.

During this milestone, we focused on managing stacks of open editors. In the picture below, you can see that the left pane has two editors open, the center pane has four, and the right pane has two more. Files listed in italics are preview files, they allow you to single click and browse files without cluttering the list of open editors and eventually tabs. 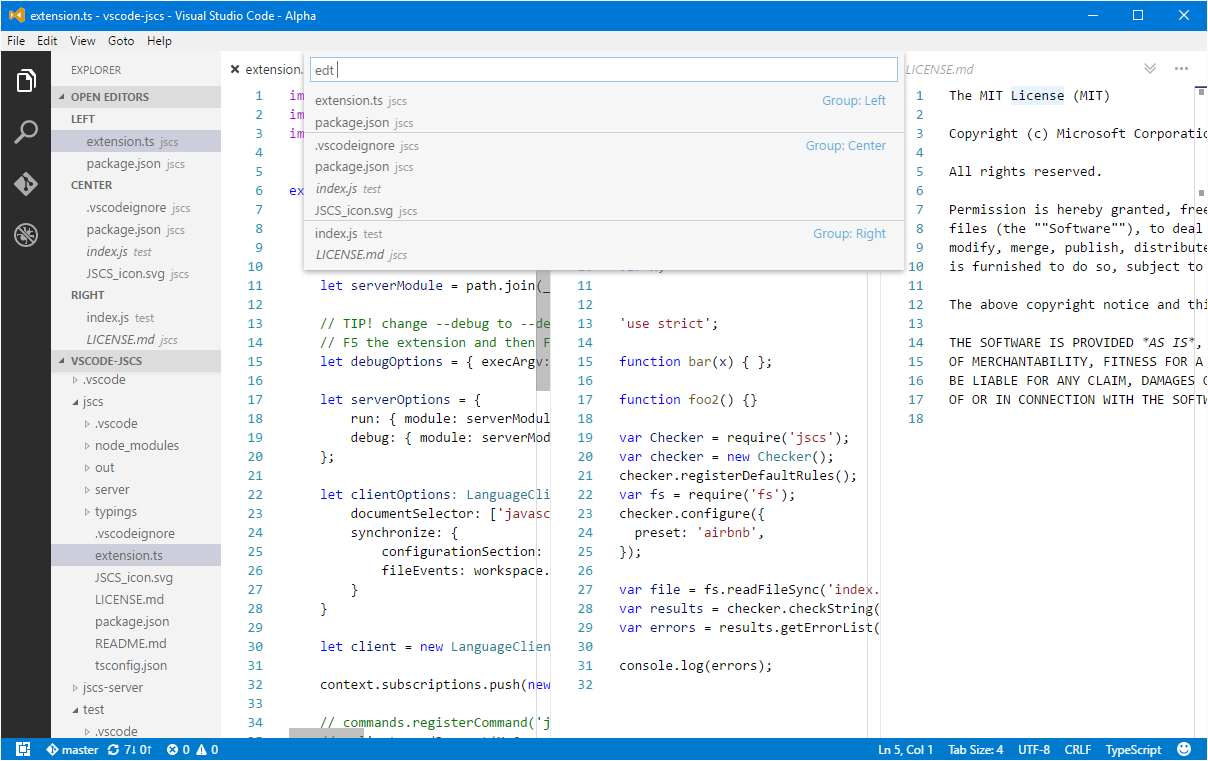 When you close an editor the last opened editor in the stack is restored, instead of closing the pane as it does today. In addition, we held a number of UX studies that have resulted in further improvements to the design, including:

This work has been checked into main and you can preview it using the Insiders Release.

Number two on User Voice is the request for an integrated terminal, issue #143. It can be convenient to have a terminal embedded directly in the tool, initially scoped to the workspace you are working in. You don't have to switch windows or alter the state of an existing terminal for a quick task.

With the May release, we are rolling out the initial version of an integrated terminal. You can open the terminal using ⌃` (Windows, Linux Ctrl+`), from the View | Terminal menu, or from the View > Toggle Terminal command in the Command Palette.

The shell that is used defaults to $SHELL on Linux and OS X, and %COMSPEC% on Windows. These can be overridden manually by setting terminal.integrated.shell.* in settings. It should act just like the terminal you're familiar with. 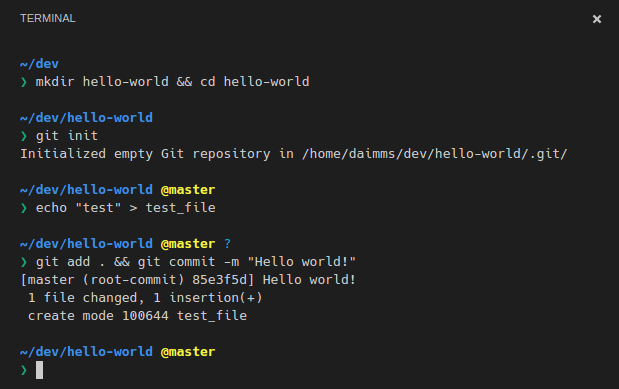 Please note, this is an early version of what we want to deliver. Currently VS Code only supports a single terminal and there still are missing features like copying and pasting with the keyboard. Windows 10 users may experience problems getting cmd.exe to work. If so, please try enabling the legacy terminal as described in #143. The full list of current bugs and feature requests can be found here.

Note: The Toggle Terminal key binding ⌃` (Windows, Linux Ctrl+`) had previously been bound to the Cycle Between Open Editors command. You can customize the key bindings and change the behavior back if desired.

It is now possible to write a key binding rule that targets the removal of a specific default key binding. With the keybindings.json, it was always possible to redefine all the key bindings of VS Code, but it can be very difficult to make a small tweak, especially around overloaded keys, such as Tab or Escape. From now on, simply add a - to the command and the rule will be a removal rule.

Variable support in CSS is a new standards proposal currently in draft form. VS Code now supports rich code completion (IntelliSense) for CSS variables as well as Go To Definition, Peek Definition, and Find All Occurrences for variables in the same file.

The ESLint extension now supports a "fix all problems" command. You can bind the eslint.fixAllProblems command to a keyboard shortcut, such as:

The TSLint extension now supports excluding files from linting (PR #47) as well as quick fixes for a set of TSLint warnings (PR #40). Thanks for the pull requests!

To provide greater control over how the internal Debug Console is revealed VS Code, we are introducing the internalConsoleOptions setting in launch.json (see #6159). This is especially useful if you are using an external terminal while debugging and you want to keep VS Code focused on your code. The possible values are:

We want VS Code to remain lightweight and fast so to improve the stepping experience for programs with a large number of local variables per scope, we've made the following adjustments for Node.js debugging:

The scope header will reflect that only the first 100 local variables are being displayed: 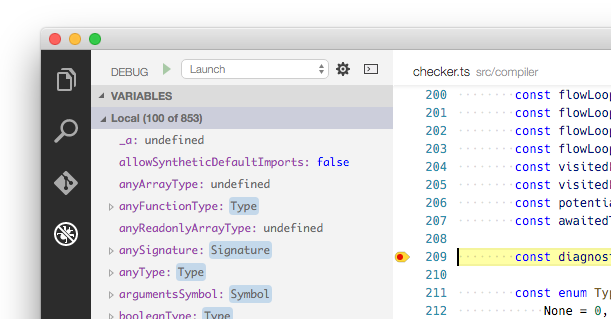 To track a variable that is not within the first 100 you must add it as a Watch expression or evaluate it in the Debug Console.

More details can be found here.

Extensions can now contribute TextMate grammars that inject new rules into the existing grammars used for syntax highlighting. This makes it possible to add colorization inside string literals or comments, such as highlighting of URLs or TODO markers across multiple languages.

We have added a new API command that allows you to use the diff-editor on two arbitrary resources like so: commands.executeCommand('vscode.diff', uri1, uri2)

There is a new rich extension sample that walks you through virtual documents, eventing, and using language features as commands. Also, the preview html sample was updated:

Debug Adapter: Support a 'One' or 'All' mode of operation for controlling threads

In a previous revision of the VS Code Debug Protocol, we had introduced a allThreadsStopped attribute on the StoppedEvent. With this attribute, a debug adapter can report back to the frontend whether only a single thread or all threads have stopped. Thanks to developer feedback, we learned that a similar attribute is necessary for the ContinueRequest too.

In the version 1.9.0 of the VS Code Debug Protocol, a boolean attribute allThreadsContinued has been added to the response from the ContinueRequest. Using this attribute, a debug adapter can report back to the UI whether only a single thread or all threads are continuing. More details can be found here.

The Language Service Protocol now offers support for telemetry notifications. Message tracing support has been implemented in the node client library to help tracking down problems in the server. It can be enabled via a settings ${clientName}.trace.server where client name is the name passed when creating the LanguageClient instance. For example eslint.trace.server for the ESLint linter service.

To make it easier to automate and configure VS Code, it is now possible to list, install, and uninstall extensions from the command line.

At the heart of VS Code is the "Monaco" code editor. You can find the "Monaco" editor across many Microsoft properties such as OneDrive, Azure, the TypeScript playground, and even in the F12 tools in IE and Edge.

Our goal is to enable anyone to consume the "Monaco" editor and host it in any browser. The challenge we have today is that the editor is embedded in the vscode repository and the language service extensions have dependencies on client (non browser) technologies.

The first step towards releasing the editor is an exploration where the TypeScript language service has been extracted from VS Code's sources and can run on top of the standalone editor API.

In the upcoming weeks we will continue to refine the API and automate the packaging with the goal of making the "Monaco" editor public with the June release of VS Code.