Thank you for using Visual Studio Code and keep the feedback coming! Based on your feedback, we added some frequently requested enhancements and provided over 300 minor improvements and bug fixes. This release is available now and is just the start - from this point on, you should expect to see an update roughly every month.

See how to update to get the bits. Read on for details about the many changes in this release.

Based on user feedback (thanks!) we've decided to make some key binding changes. If you do not like our changes, you can always change key bindings as described in the keybindings documentation.

You can now create a new file from the command line. For a file that doesn't exist yet, append the file path to create it. VS Code will open it as a dirty (modified but not yet saved) file in the editor.

Here's multi-cursor improvements that we've made.

Pressing Tab on an empty line will indent as much as needed to place the cursor at the correct starting position (i.e., not just insert a single indentation).

Here's an example of expanding the selection with ⌃⇧⌘→ (Windows, Linux Shift+Alt+Right):

In launch configurations, you can now use the runtimeArgs attribute. This is useful if you need to pass command-line arguments to Node or Mono (not to the program being debugged).

Starting a debug session on Linux now opens a terminal with support for input/output.

Debugging is now supported in folder-less workspaces For example, you can debug when if a folder is not active (e.g., when you choose File, Close Folder or File, New Window). VS Code displays a purple status bar when you are in folder-less debug mode.

For exceptions thrown, via the code line marked in red, and for breakpoints, via the status bar.

Here's other debugging changes we made for this release.

Multiline problem matchers have been added to the task system to capture stylish output from several linting tools. You can see an example in Tasks.

A new property, suppressTaskName, can be specified globally, per operating system, or per task, to indicate whether the task name is added to the arguments when a task command is executed. See more details in the Appendix of Tasks.

Rust has been added as a supported language for colorization and bracket matching.

The TypeScript language service has been updated to TypeScript version 1.5.

New options allow you to turn off all semantic and syntax checks, useful if you prefer JSHint instead of the VS Code JavaScript validator.

HTML auto closing of tags has now been removed and replaced with smarter IntelliSense on </.

To get a better approximation of the Chinese-Japanese-Korean (CJK) character widths, we now measure half-width m and full-width m. This result is text with CJK characters renders with a monospace font which shouldn't overflow the line and introduce horizontal scroll bars. 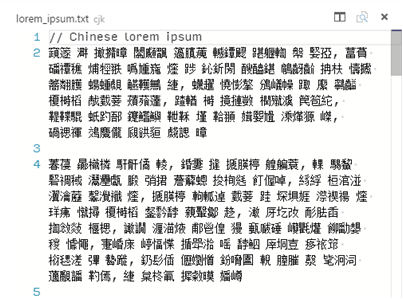 File Compare applies to files in Working Files now too. A new global action, Files: Compare Opened File With, has been added to the Command Palette.

To copy the path of any file or folder in the Explorer, right-click it and choose Copy Path.

A new global action, Files: Copy Path of the Active File, has been added to the Command Palette.

The new menu item File, Close Folder will close the currently active folder and bring the workbench back into the "empty" state with a single, empty file opened. (If you haven't enabled Auto Save, you'll be prompted to save any pending changes in the active folder before it is closed.)

Set the file encoding globally or per workspace by using the files.encoding setting in User Settings or Workspace Settings.

You can view the file encoding in the status bar.

Click on the encoding in the status bar to reopen or save the active file with a different encoding.

Then choose an encoding. 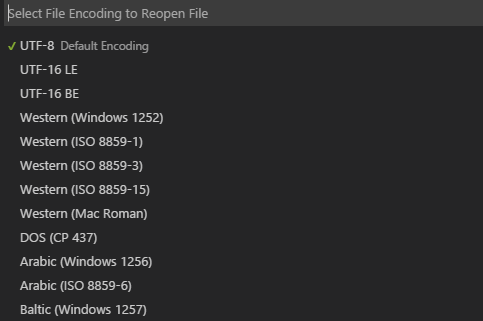 The JSON parser is now more fault tolerant. For example, if you have a trailing comma in settings.json, VS Code will no longer silently fail to apply your customized settings. We'll still provide a visual indicator that there is an issue with the JSON. This example displays a red squiggly line on the last bracket, and a red box to the far right of Line 5.

With this release, you can now access Windows files and folders through UNC paths.

Files not inside the opened folder but inside Working Files are now watched for changes and updated when changed.

VS Code is now available for 32-bit editions of Linux (download).

We also fixed the following items.

For a list of currently known issues, see our FAQ. You can view or report new issues here.