November was a big release for us (adding extensibility support and moving to open source) and we appreciate all the support we received leading up to and during the Connect(); event. We've kept busy in December and we hope you like this release.

These release notes only capture what's new in the core of Visual Studio Code. Do not forget to check out the marketplace for new extensions.

A big thanks for the great contributions we have received. The community has filed over 200 bugs, 280 feature requests, and submitted 70 pull requests. We have addressed many of these issues and merged most of the pull requests.

Regarding fixes, if you want to find out when a fix to your issue is available in a VS Code update, please check the milestone assigned to the issue.

Thanks to a community contribution, VS Code has improved editor scroll support:

Added support for function keys f13-f19 and for the numeric keypad keys:

For example, Split Editor when using a French (France) keyboard layout is now rendered as Ctrl+*: 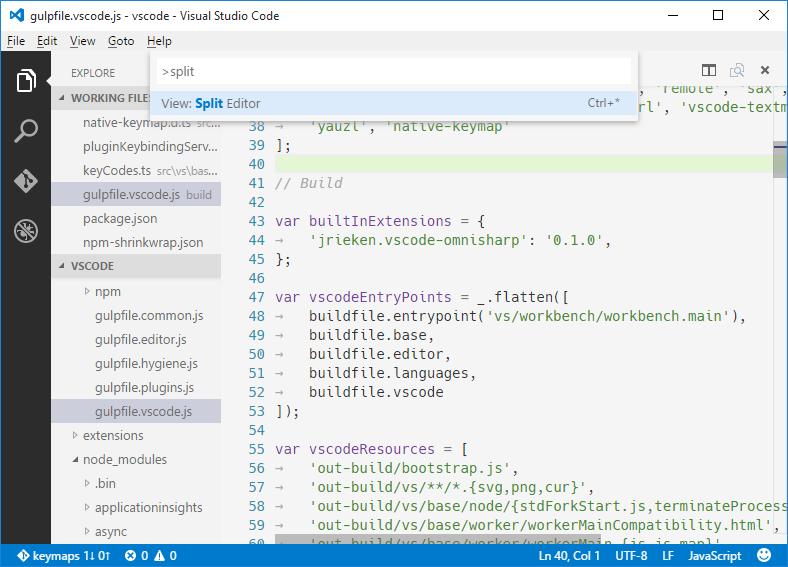 When editing keybindings.json, we now highlight misleading key bindings - those that are represented in the file with the character produced under the standard US keyboard layout, but which need pressing keys with different labels under the current system's keyboard layout.

For example, here is how the Default keybindings rules look like when using a French (France) keyboard layout:

Finally, we added a new widget that helps input the key binding rule when editing keybindings.json. To launch the Define Keybinding widget, press ⌘K ⌘K (Windows, Linux Ctrl+K Ctrl+K). The widget listens for key presses and renders the serialized JSON representation in the text box and below it, the keys that VS Code has detected under your current keyboard layout. Once you've typed the key combination you want you can press Enter and a rule snippet will be inserted.

ES6 is the new default

We have made ES6 the default for JavaScript files. This means you don't need to create jsconfig.json files to enable new syntax and by default you get suggestions for ES6-types, like Promise, Set, Map, String.startsWith and much more. Thanks to a community contribution.

At the same time, the grammar used to colorize JavaScript was also updated to support the ES6 syntax.

The TypeScript language service was updated to version 1.7.5.

To improve the JavaScript and JSX support, the plan is to adopt Salsa. There is good progress on the Salsa project, but until VS Code has switched over to Salsa, we can only offer a workaround for using VS Code with JSX.

The grammars used to colorize JS and JSX are now aligned.

Thanks to a community contribution, there is now a Show Outdated Extensions command, that shows all outdated extensions and lets you quickly install their updates.

There is now proxy support for the Extension Marketplace.

If an extension exports a function named deactivate(), VS Code now calls it on shutdown.

The file picker ("Quick Open") is now able to search on file paths when you include slash (Mac/Linux) or backslash (Windows) in the search term. This allows you to list all the files of a directory easily.

A new setting filePicker.alternateFileNameMatching enables fuzzy searching for the file picker. Once enabled, the search term will match on the full path of the file by default, without having to include path separators in the query. In addition, a search term will match in a more fuzzy way on the path compared to the default. For example, a search for fb will match a file foobar because the filename contains f and b. We also added a new sorter for the picker when fuzzy searching is enabled which tries to put the most relevant results to the top. Please try out this feature and give us feedback so that we can tune the experience.

The setting window.openInNewWindow was renamed to window.openFilesInNewWindow to clarify its purpose. You can still use the old setting but we ask you to update to the new name.

Various fixes to the default light and dark theme. Due to the move to TextMate tokenizers in the last release, there were changes in the appearance of the default light and dark theme. Some themes got far more colorful, in particular JavaScript, while other languages lost colors, e.g. Jade and XML. The goal was to stay as close as possible to what we had in the 0.9.0 release so we use a few major colors: blue for keywords, green for comments and red for strings.

Emmet is now supported in JSX and TSX files.

It is now possible to open a sub-directory of a Git repository in VS Code. VS Code's Git services will still work as usual, showing all changes within the repository, but file changes outside of the scoped directory are shaded and have a tool tip indicating the file is located outside the current workspace.

There is now a Synchronize action in the Status Bar, next to the branch indicator, when the current checked out branch has an upstream branch configured.

If there is no upstream branch configured and the Git repository has remotes set up, a new Publish action is enabled. This will let you publish the current branch to remote.

We now wrap long text in the debug console.

We now show breakpoints in a more intuitive way:

Extensions can now contribute JSON schema associations. The jsonValidation contribution point takes a file pattern and the URL of the JSON schema.

Alternatively, extensions can also give the path to a schema file in the extension folder:

For Node.js based debug adapter development, we've made the VS Code Debug Protocol and an adapter default implementation available as npm modules:

The source for these modules lives in the GitHub repository vscode-debugadapter-node. Both mock-debug and node-debug have been updated to use the npm modules.

The VS Code GitHub repository supports continued integration for branches and pull requests:

During this first iteration of VS Code being open source, we tuned and documented more of our development workflows:

We updated Electron to version 0.34.5. This includes a bug fix for the issue on Linux where the editor font was showing blurry on certain high DPI displays.

The VS Code development team will now take time off to be with friends and family. We will be back fully recharged in January.