Update 1.18.1: The update addresses these issues.

Welcome to the October 2017 release of Visual Studio Code. There are a number of significant updates in this release and we completed several popular outstanding feature requests. We hope you like it and the highlights include:

If you'd like to read these release notes online, go to Updates on code.visualstudio.com.
You can also check out this 1.18 release highlights video from Cloud Developer Advocate Brian Clark.

Insiders: Want to see new features as soon as possible? You can download the nightly Insiders build and try the latest updates as soon as they are available.

Support for multi-root workspaces is now enabled by default in the Stable release. This was our #1 feature request - it's been a while coming but it's here now.

Please refer to our documentation for a full explanation of all of the multiple folder features: improvements to settings, our SCM experience, Tasks, Debugging and more.

NOTE: Extension authors should refer to our wiki that explains the new extension APIs to make your extension fully leverage multi-root workspaces.

To satisfy another very popular feature request, we added support to the File Explorer to show modified, added, conflicting, and ignored files in a different color and with a badge. 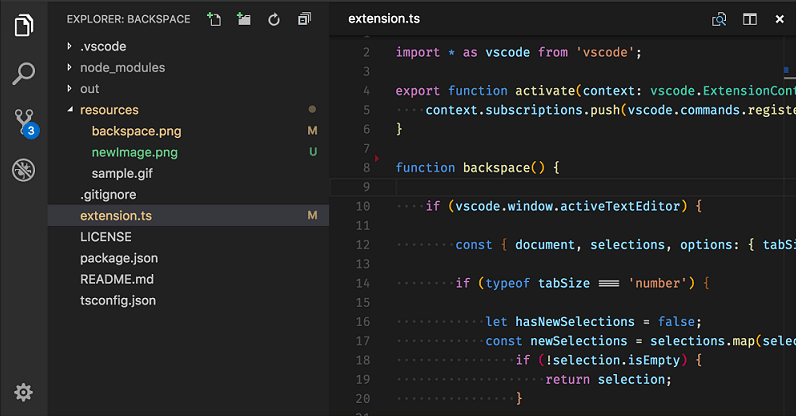 There is also a proposed API to allow extension authors to add color decorations to arbitrary resources. We haven't finalized on anything yet but are eager to learn how you would use decorations.

Per popular user request, we now support a vertical panel layout. Using the actions Move to Right and Move to Bottom in the panel title bar, panels can switch between being displayed on the bottom or the right side. 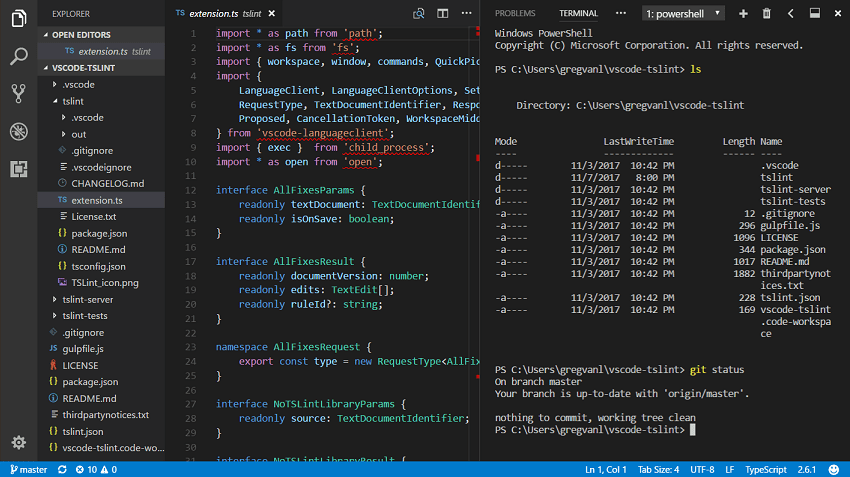 We have improved the panel title bar such that it is now possible to rearrange and hide panels as well as added overflow support. Overflow with the Additional Views dropdown is particularly useful when the panels are docked vertically and have limited horizontal space.

The VS Code logo for Stable releases is now blue again. You can read all about our icon journey in this blog post.

Note: Depending on your platform, you may still see the earlier logo due to operating system caching of the application icon.

We now present a confirmation dialog when moving files or folders in the File Explorer via drag and drop. This should prevent accidentally performing a move when not desired. If you don't want to see the confirmation dialog, you can configure explorer.confirmDragAndDrop to false.

Note: We will always show a confirmation dialog when deleting a file or folder will bypass your platform's trash bin.

Due to popular demand, the Add Selection to Next Find Match (⌘D (Windows, Linux Ctrl+D)) action has been modified to behave differently when you start adding multiple cursors with no selected text. In this case, the action will temporarily ignore the Find widget search options and will always search for whole words and case sensitive matches.

Navigate to next / previous symbolic highlight

Thanks to PR #35740 from Krzysztof Cieślak, it is now possible to navigate between highlighted symbols using F7 or Shift+F7 in languages where there is a semantic highlight provider. When you have a symbol selected, you can now quickly move to other instances of that symbol in your file.

The terminal now supports the escape sequence for faint text:

You can already set custom environment variables for Integrated Terminal sessions but now you can also clear existing variables by assigning them to null in the terminal.integrated.env.<platform> settings:

Windows support in the Integrated Terminal has been improved:

VS Code 1.18 ships with TypeScript 2.6.1. This update provides VS Code with several exciting tooling improvements and also fixes a few bugs. You can read more about TypeScript 2.6 here.

Auto Import for JavaScript and TypeScript

Speed up your coding with auto imports for JavaScript and TypeScript. The suggestion list now includes all exported symbols in the current project. Just start typing:

If you choose one of the suggestion from another file or module, VS Code will automatically add an import for it. In this example, VS Code adds an import for Hercules to the top of the file: 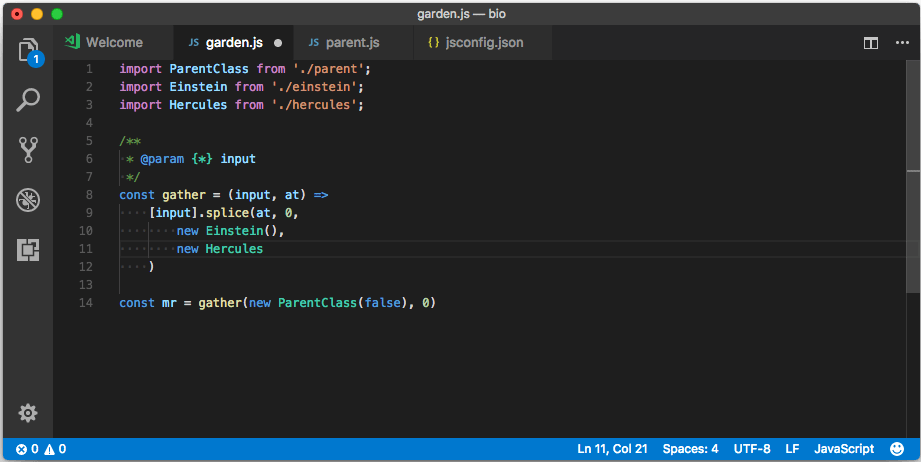 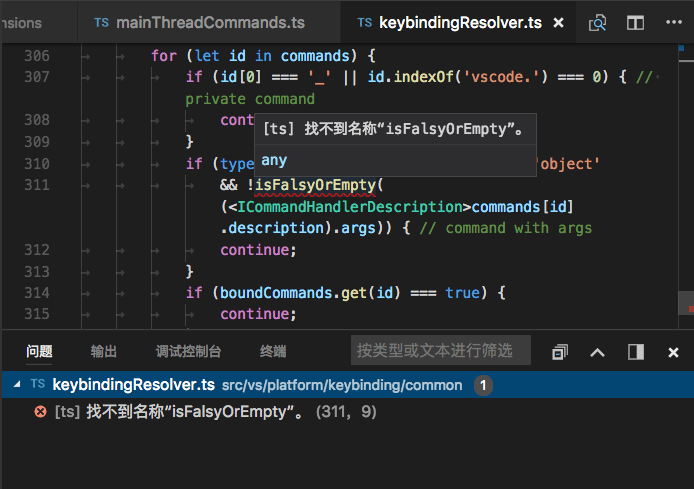 VS Code 1.18 adds several new JavaScript and TypeScript refactorings in addition to the extract method refactoring added in VS Code 1.16. The extract constant refactoring creates a new local variable for the currently selected expression:

When working with classes, you can also extract a value to a new property.

TypeScript now offers a Quick Fix to npm install missing @types definitions for a given module:

This Quick Fix will install the @types definition locally and add it to the devDependencies in your package.json.

VS Code automatically generates both build and build+watch tasks for all tsconfig.json files in your workspace. In VS Code 1.18, the typescript.tsc.autoDetect setting now lets you control which kinds of tasks are generated:

Support for selectively enabling quick suggestions inside of strings and comments

JSON now supports JSON Schema Draft 06. The most notable additions are the const, contains and propertyNames properties. Read here for a more detailed overview of changes from draft 04.

You can now review source code changes right within the standard editor. This feature depends on whether it is supported by the source code provider but it is already enabled for Git repositories out of the box.

With this new UI, you can not only review your code changes but also navigate, stage or revert them inline.

When staging a file which is flagged as having conflicts due to a merge or rebase, VS Code will check for the standard merge markers (for example <<<<<<<) and alert you if you forget to delete them when you are about to stage the file.

Recently, there was a patch to Git which enables tools like VS Code to use git status without interfering with other concurrent Git commands. VS Code is now prepared for that upcoming Git change by using the right environment context (GIT_OPTIONAL_LOCKS) when spawning Git.

Recommended extensions now display a badge to easily distinguish them from other extensions in a list. Hover on the badge or click the list item to learn why the extension was recommended to you.

There is also a handy Install All Workspace Recommendations command on the WORKSPACE RECOMMENDATIONS title bar to install all the extensions that are recommended by other users of your workspace.

You can edit workspace recommendations via the Configure Recommended Extensions (Workspace Folder) command in the same title bar.

We have introduced new actions to easily move keyboard focus to the various Debug sections. This should make it easier for keyboard centric users to navigate while debugging.

Coloring of Debug Console evaluation results based on type

A first glimpse of support for Node.js debugging in the Windows Subsystem for Linux (WSL) was already available in the previous milestone (but only for older versions of Node.js that still support the "legacy" protocol). In this milestone, another pull request by Bartosz Sosnowski (@bzoz) was integrated that adds support for the "inspector" protocol that is used by more recent versions of Node.js. With this update, it is now possible to run Node.js v8 in WSL.

The schema for the tasks.json file version 2.0.0 was updated. The taskName property is deprecated in favor of the label property to make it more consistent with contributed tasks. In addition, there is now a snippet for new tasks. By default, it creates a task of type shell to execute commands in the Integrated Terminal.

Decorations are a fundamental editor concept on which numerous features are built; for example: find matches highlights, diff annotations, word highlights, selection highlights, breakpoints, folding markers, and inline colors. Moreover, numerous extensions make use of decorations to customize the rendering of VS Code's editor. Below is a screenshot with various editor decorations highlighted: 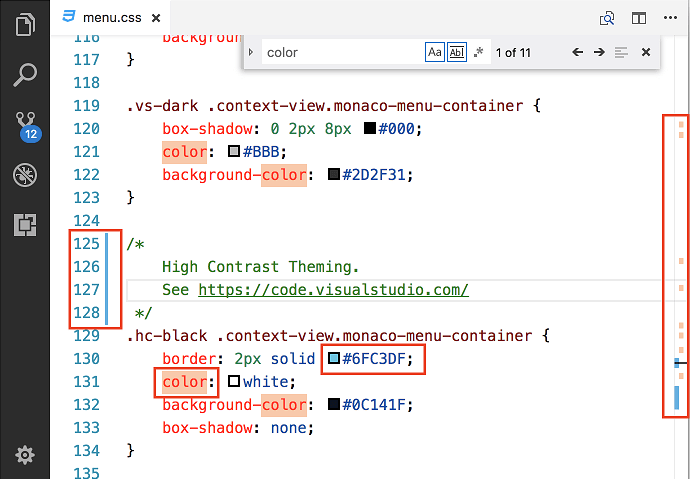 PR #36410 reimplements editor decorations as a delta-encoded Interval Tree (an augmented Red-Black tree). Besides reducing the time spent in all operations related to decorations (creating, updating, deleting or querying), the change also brings in some impressive memory usage savings. As an immediate result of these optimizations, we have increased the in-file on type find limit from 1,000 matches to 20,000 matches.

We are always on the lookout for ways to improve VS Code start-up time. During the last month, we made a variety of improvements that significantly decreased the time of the initial (cold) launch of VS Code.

File Icon themes can now disable the default folder icon (the rotating triangle) in tree views and use the folder icons to indicate the expansion state:

There is a new context key to control keybindings and menu items. Its name is resourceExtname and its value will be the extension of the file in question.

A new workspace.name property was added that provides (readonly) access to the name of the workspace. The name will be undefined if no workspace is opened.

You can now set the environment of terminal instances launched via the extension API:

With the introduction of a proper vscode.debug.console.append(...) API in the October release, it is no longer necessary to use the debug.logToDebugConsole command to append text to the debug console. Due to that we are deprecating the debug.logToDebugConsole command and plan to drop support for it in the future. If it is difficult for you to move off this feature, please speak up by commenting here.

Note: Currently this API is proposed, so in order to use it you must opt into it by adding a "enableProposedApi": true to package.json and you'll have to copy the vscode.proposed.d.ts into your extension project. Also be aware that you cannot publish an extension to the Marketplace that uses the enableProposedApi attribute.

Command vscode.startDebug has been removed

As announced in the previous release, we have finally removed support for the vscode.startDebug command.

Command vscode.workbench.customDebugRequest has been removed

As announced in the previous release, we have finally removed support for the vscode.workbench.customDebugRequest command.

Activation event onDebug:type has been removed

As announced in the previous release, we have finally removed support for the onDebug:type activation event.

Using debuggers.startSessionCommand in package.json has been removed

As announced in the previous release, we have finally removed support for the startSessionCommand command.

Using command with debuggers.initialConfigurations in package.json is deprecated

As announced in the previous release, we have finally removed support for the initialConfigurations command.

With this release, most of the command based debug API has been replaced by the proper API available through vscode.d.ts. Consequently, we have updated both the documentation for debug extensions and the underlying mock-debug example for the new APIs.

This is the seventh month since we opened community localization in Transifex. We now have nearly 500 members in the Transifex VS Code project team. We appreciate your contributions, either by providing new translations, voting on translations, or suggesting process improvements.

Here is a snapshot of top contributors for this release. For details about the project including the contributor name list, visit the project site at https://aka.ms/vscodeloc.