Version 1.42 is now available! Read about the new features and fixes from January.

It’s that time again – our September update is ready for VS Code.

Before we get into all of the exciting new stuff, there are a couple of key changes with this update that we don't want you to miss.

We adopted a new installation and update framework for Windows based on Inno Setup. This fixes many Windows integration issues and streamlines the update story.

Note: You will see a two stage update as a result of the change to the new installer. First to version 0.7.20 to bootstrap the new installer and then to the 0.8.0 release version. The new installer will prompt you during installation. Continue through the setup dialog to install VS Code 0.8.0.

Tip: You will need to close any currently open command windows to pick up the new PATH setting.

We renamed the top level .settings folder to .vscode to make it clear that this folder contains VS Code specific configurations and to avoid conflicts with other IDEs who may also use a folder named .settings (e.g. Eclipse).

When you update to version 0.8.0, VS Code will rename the folder to the new name and inform you if you had any files in a .settings folder.

VS Code is now able to apply TextMate syntax color themes (.tmTheme). We picked some themes from (https://colorsublime.github.io/) and made them available under File | Preferences | Color Theme. In one of the next releases, users will be able to extend this list with their own favorite themes.

Open the Color Theme picker with File | Preferences | Color Theme and use the up and down keys to change the selection and preview the themes.

Debugging - No Mono Dependency for Node

We have ported the implementation of the Node.js debugging support from C#/Mono to TypeScript/Node.js, eliminating our Mono dependency for debugging Node.js applications on macOS and Linux. 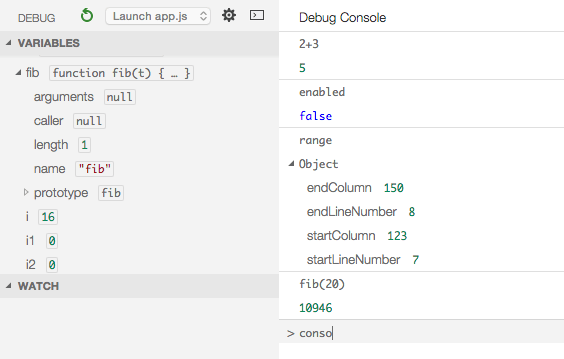 Languages - JavaScript Linting as you Type

VS Code now provides support for ESlint and JSHint. If enabled, the JavaScript code is validated as you type and reported problems can be navigated to and fixed inside VS Code.

To enable one of the linters do the following:

Try it out by opening a JavaScript file and adding a problem that should be detected by the enabled linter. VS Code shows problems inside the editor and in the status bar.

Note: At this time, TypeScript 1.6 should be considered experimental so proceed at your own risk. :)

VS Code uses TypeScript 1.5 in the box. If you want to use a newer version of TypeScript, you can define the typescript.tsdk setting. The value of this setting is the absolute path to the lib folder of a TypeScript installation. This folder contains the file tsserver.js and the corresponding lib.*.d.ts files. Refer to this blog post for how to install the nightly builds of TypeScript.

We now support colorizing TSX (TypeScript JSX) files. To get full language support for TSX files, you need to install the latest TypeScript 1.6 version and configure VS Code to use it with the typescript.tsdk setting, as described above.

To learn more about how to use TSX with TypeScript refer to the TypeScript TSX Wiki page.

We have moved to the OmniSharp version 1.1.1 (OmniSharp releases). This version of OmniSharp will happily work with DNX Beta7 but note that on Linux and Mac there is not yet support for using CoreCLR as a development platform.

There is a new Undo Last Commit action which will let you undo your previous commit, keeping the changes in the working folder.

A new property echoCommand has been added to the global and task specific sections of the tasks.json file. If set to true, the executed command is echoed to the task's output view. This is useful when you are configuring tasks and you want to see the full command VS Code is running.

As always we fixed many issues.

Here are a few of the notable ones from the public bug tracker: