During July, we slowed down feature work in favor of reducing our bug backlog and removing engineering debt. However, we were still able to add some improvements.

Here are the highlights:

By default, VS Code shows snippets and completion proposals in one widget. This is not always desirable so we added a new configuration setting called editor.snippetSuggestions. To remove snippets from the suggestions widget, set the value to "none". If you'd like to see snippets, you can specify the order relative to suggestions; at the top ("top"), at the bottom ("bottom"), or inline ordered alphabetically ("inline"). The default is "inline".

In addition, we added a new command to insert a snippet, Insert Snippet, which displays the available snippets in a dropdown.

The editor now supports Tab completions. You can enable it with the editor.tabCompletion setting. After typing the prefix of a snippet, press Tab to insert it.

Note that quick suggestions and Tab completion might interfere because the suggestions widget also reacts to Tab.

or remove snippets from the suggest widget:

When we added Tabs (tabbed headings), we put editor actions (Switch to Changes View, Open Preview) into the context menu to gain some space. User feedback was clear that this made the actions much harder to discover and so we have added them back to the title header.

You can now drag and drop Tabs (tabbed headings) across windows. You can now also drop a folder into VS Code to open it.

If you have a message template configured in your Git settings, then the Git view in VS Code will show that message in the commit message box by default. Thanks to William Raiford for contributing this feature.

We made the first steps in improving the performance of Quick Open, particularly for large workspaces such as Chromium. On Mac (⌘+P) and on Linux (Ctrl+P), Quick Open on a Chromium workspace now takes less than half the time it took before. On Windows (Ctrl+P), it originally took twice as long as on Mac and now it is just as fast. We are not finished, expect more performance gains in the next iteration.

The integrated terminal had several changes related to polish and compatibility this release:

There has been some small improvements for the JSON completions:

VS Code now supports restarting execution at a stack frame. This can be useful in situations where you have found a problem in your source code and you want to rerun a small portion of the code with modified input values. Stopping and then restarting the full debug session can be very time-consuming. The Restart Frame action allows you to re-enter the current function after you have changed variables with the Set Value action:

Note that Restart Frame won't unroll any state changes, so it may not always work as expected.

Restart Frame is only available if the underlying debug extension supports it and currently only VS Code's built-in Node.js debugging does. Make sure to use a Node.js version >= 5.11 since earlier versions do not work in all situations.

Previously VS Code expected that large data structures like arrays were broken into "chunks" in a debug extension and consequently only a few debug extensions supported this useful feature. With this release, we have moved this functionality into the VS Code debugger front-end so that all debug extensions can easily benefit from this in the future. 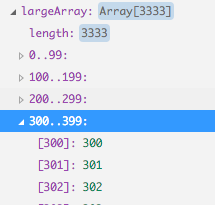 See section "Debug Protocol Changes" below for details of how a debug extension can make use of this.

Double clicking on the Debug view toolbar drag icon will center the Debug toolbar. This makes it easy to restore the default state.

The deprecated configuration settings can now both be replaced by the autoClosingPairs setting in the language-configuration.json file in your extension. See #9281 for detailed instructions.

In order to allow the VIM extension to make good progress on their roadmap particularly on up-and-down motion and Tab related commands, we added the following editor APIs:

Last milestone, we added support to contribute menu items to different places in the editor. This milestone we refined sorting of groups. They are now sorted in lexicographical order with the following defaults/rules.

The context menu of the editor has these default: You can add menu items to these groups or add new groups of menu items in between, below, or above. In this release, only the editor context menu allows this grouping control but it will soon be available for the editor title menu and the explorer context menu as well.

The debug protocol has been extended in the following areas (and VS Code already provides the corresponding UI):