Version 1.61 is now available! Read about the new features and fixes from September.

Jupyter Notebooks in VS Code

Jupyter (formerly IPython Notebook) is an open-source project that lets you easily combine Markdown text and executable Python source code on one canvas called a notebook. Visual Studio Code supports working with Jupyter Notebooks natively, and through Python code files. This topic covers the native support available for Jupyter Notebooks and demonstrates how to:

Setting up your environment

To work with Python in Jupyter Notebooks, you must activate an Anaconda environment in VS Code, or another Python environment in which you've installed the Jupyter package. To select an environment, use the Python: Select Interpreter command from the Command Palette (⇧⌘P (Windows, Linux Ctrl+Shift+P)).

When getting started with Notebooks, you'll want to make sure that you are working in a trusted workspace. Harmful code can be embedded in notebooks and the Workspace Trust feature allows you to indicate which folders and their contents should allow or restrict automatic code execution.

If you attempt to open a notebook when VS Code is in an untrusted workspace running Restricted Mode, you will not be able to execute cells and rich outputs will be hidden.

Create or open a Jupyter Notebook

You can create a Jupyter Notebook by running the Jupyter: Create Blank New Jupyter Notebook command from the Command Palette (⇧⌘P (Windows, Linux Ctrl+Shift+P)) or by creating a new .ipynb file in your workspace.

Next, select a kernel using the kernel picker in the top right.

After selecting a kernel, the language picker located in the bottom right of each code cell will automatically update to the language supported by the kernel.

If you have an existing Jupyter Notebook, you can open it by right-clicking on the file and opening with VS Code, or through the VS Code File Explorer.

Once you have a Notebook, you can run a code cell using the Run icon to the left of the cell and the output will appear directly below the code cell.

You can run multiple cells by using Run All, Run All Above, or Run All Below.

Save your Jupyter Notebook

You can save your Jupyter Notebook using the keyboard shortcut Ctrl+S or File > Save.

You can export a Jupyter Notebook as a Python file (.py), a PDF, or an HTML file. To export, select the Export action on the main toolbar. You'll then be presented with a dropdown of file format options.

Note: For PDF export, you must have TeX installed. If you don't, you will be notified that you need to install it when you select the PDF option. Also, be aware that if you have SVG-only output in your Notebook, they will not be displayed in the PDF. To have SVG graphics in a PDF, either ensure that your output includes a non-SVG image format or else you can first export to HTML and then save as PDF using your browser.

Work with code cells in the Notebook Editor

The Notebook Editor makes it easy to create, edit, and run code cells within your Jupyter Notebook.

While working with code cells, a cell can be in three states: unselected, command mode, and edit mode. The current state of a cell is indicated by a vertical bar to the left of a code cell and editor border. When no bar is visible, the cell is unselected.

When a cell is in command mode, a solid vertical bar will appear to the left of the cell.

When you're in edit mode, the solid vertical bar is joined by a border around the cell editor.

Code cells can be added to a Notebook using the main toolbar, a cell's add cell toolbar (visible with hover), and through keyboard commands.

Using the plus icons in the main toolbar and a cell's hover toolbar will add a new cell directly below the currently selected cell.

The selected code cell can be changed using the mouse, the up/down arrow keys on the keyboard, and the J (down) and K (up) keys. To use the keyboard, the cell must be in command mode.

Selected cells will be indicated by the filled background. 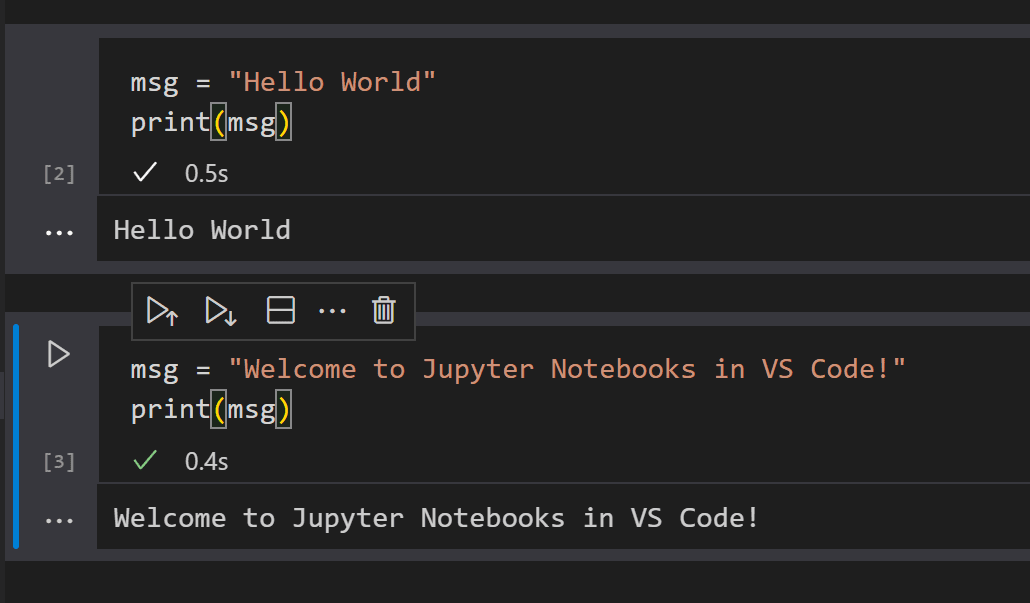 Once your code is added, you can run a cell using the Run icon to the left of the cell and the output will be displayed below the code cell.

Moving cells up or down within a Notebook can be accomplished via dragging and dropping. For code cells, the drag and drop area is to the left of the cell editor as indicated below. For rendered Markdown cells, you may click anywhere to drag and drop cells.

To move multiple cells, you can use the same drag and drop areas in any cell included in the selection.

You can also use the keyboard shortcuts Alt+Arrow to move one or multiple selected cells.

Deleting a code cell can be accomplished by using the Delete icon in the code cell toolbar or through the keyboard shortcut dd when the selected code cell is in command mode.

You can use the z key to undo your previous change, for example, if you've made an accidental edit, you can undo it to the previous correct state, or if you've deleted a cell accidentally, you can recover it.

Switch between code and Markdown

Once Markdown is set, you can enter Markdown formatted content to the code cell.

To render Markdown cells, you can select the check mark in the cell toolbar, or use the Ctrl+Enter and Shift+Enter keyboard shortcuts.

Clear output or restart/interrupt the kernel

If you'd like to clear all code cell outputs or restart/interrupt the kernel, you can accomplish that using the main Notebook Editor toolbar.

When you are in command mode, you can enable or disable line numbering within a single code cell by using the L key.

To toggle line numbering for the entire notebook, use Shift+L when in command mode on any cell. 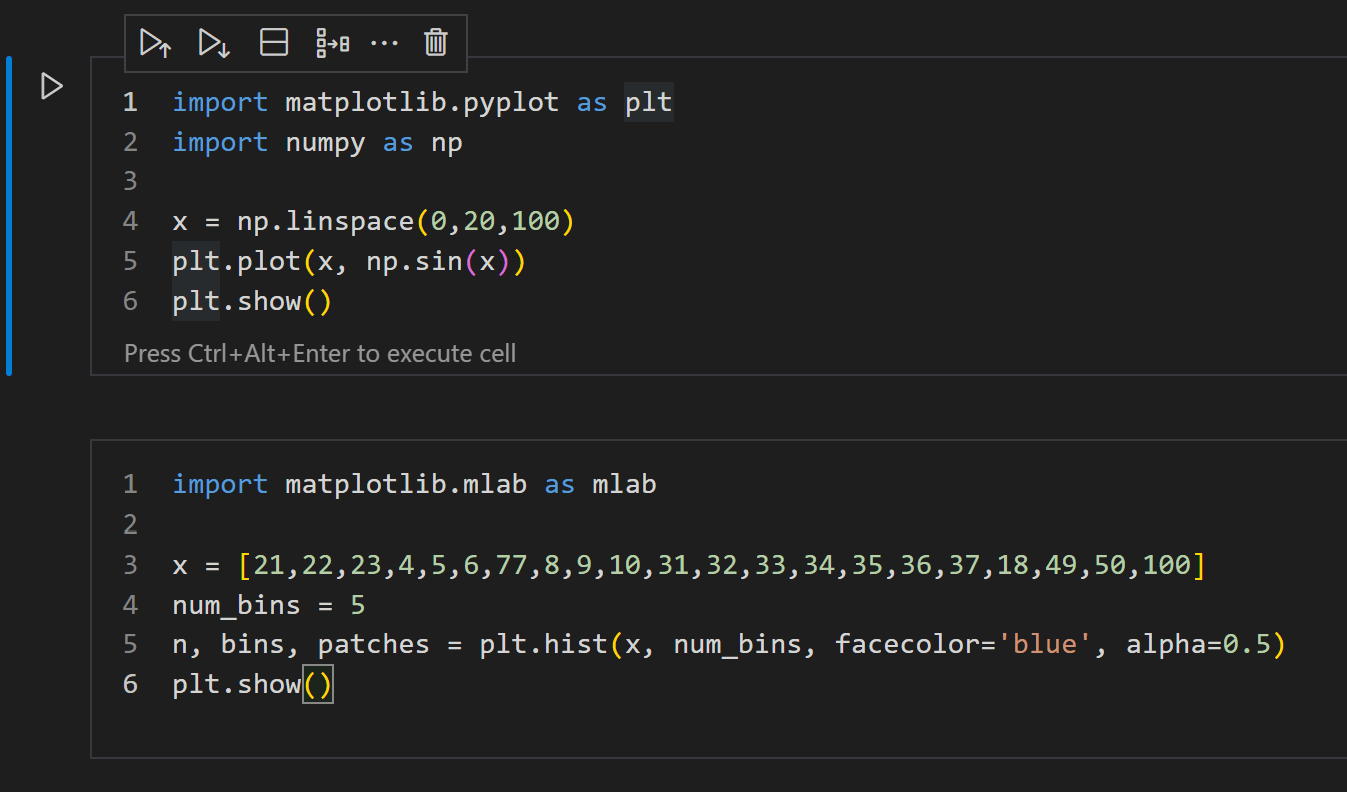 To navigate through your notebook, open the File Explorer in the Activity bar. Then open the Outline tab in the Side bar. 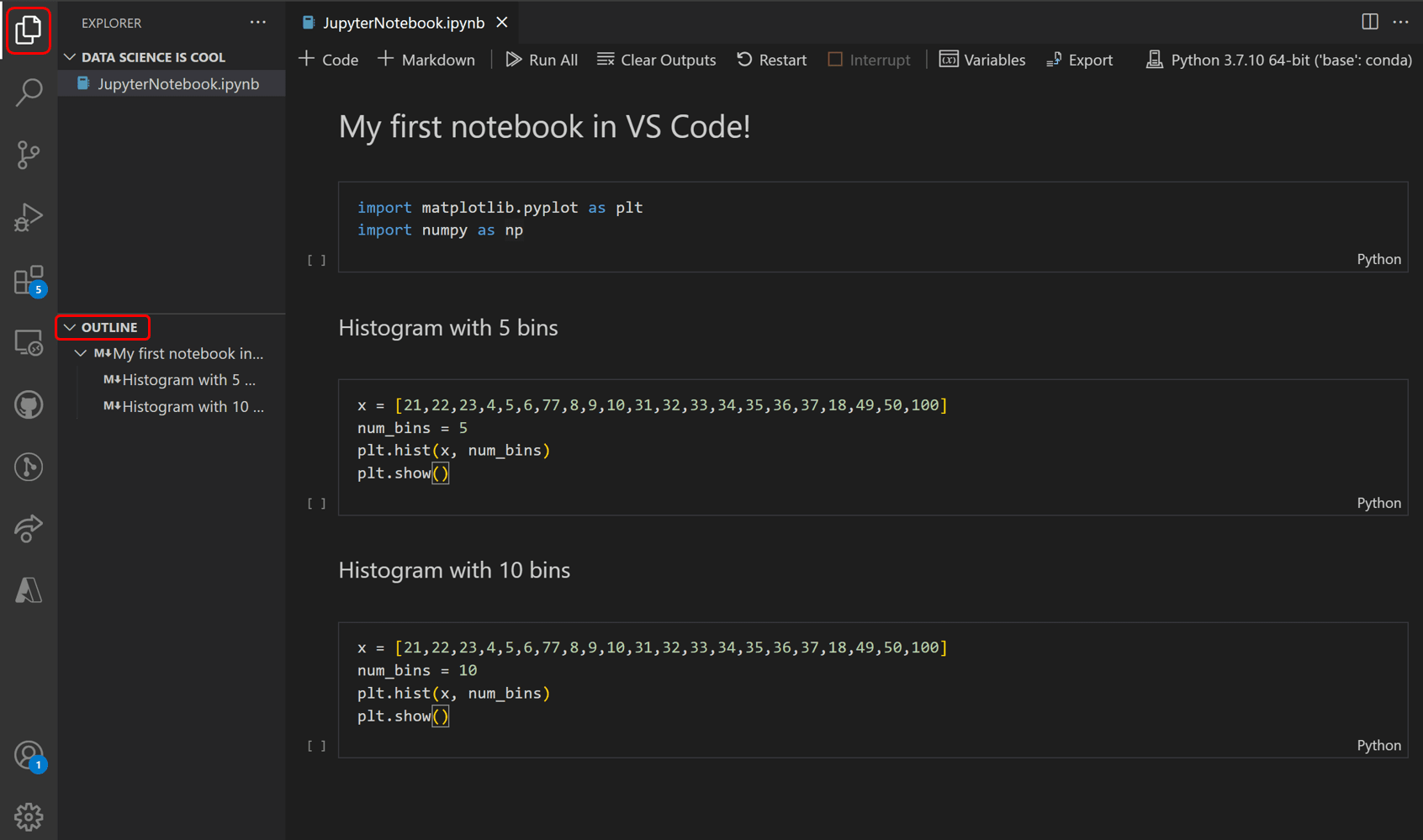 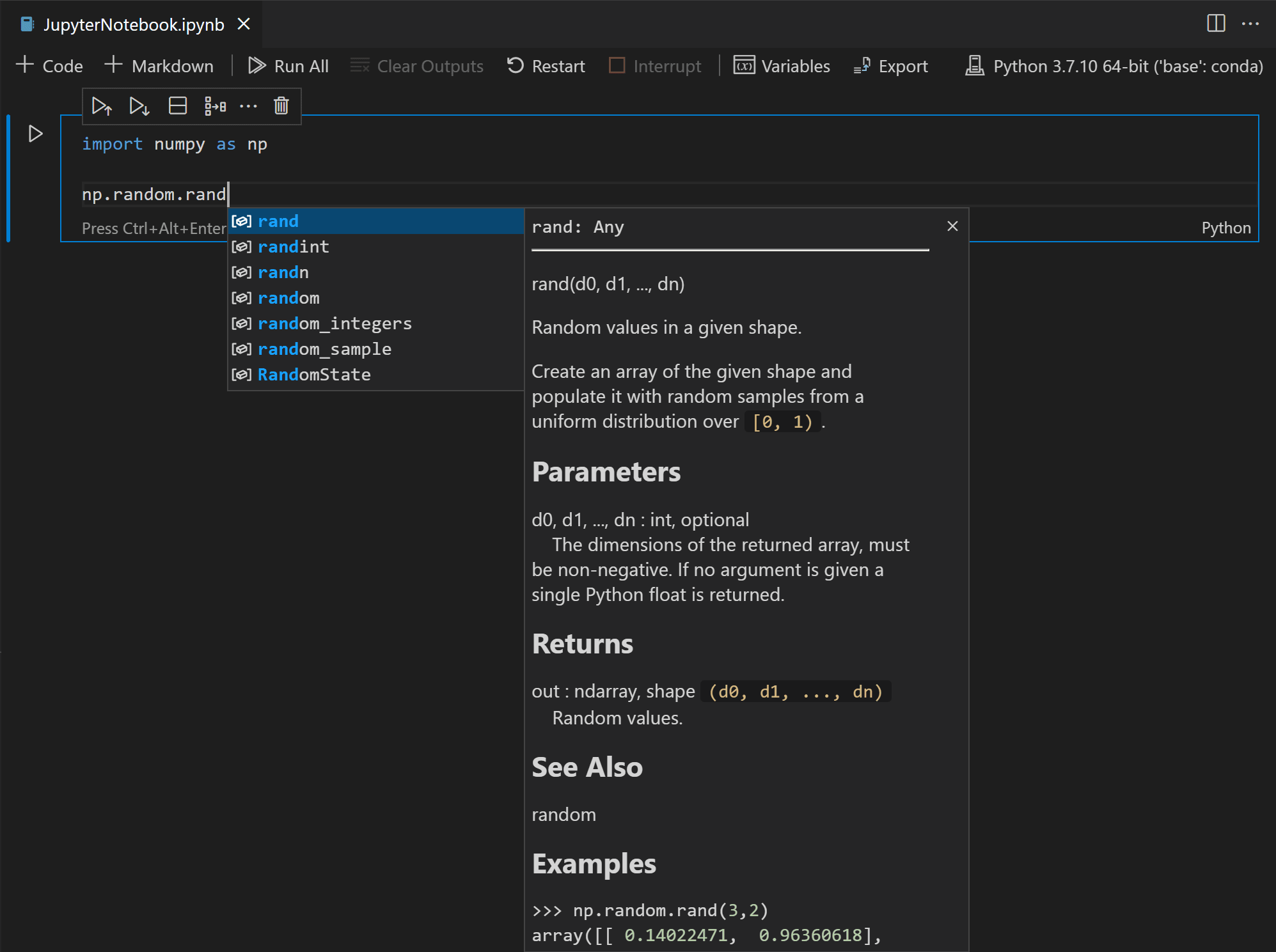 Within a Python Notebook, it's possible to view, inspect, sort, and filter the variables within your current Jupyter session. By selecting the Variables icon in the main toolbar after running code and cells, you'll see a list of the current variables, which will automatically update as variables are used in code. The variables pane will open at the bottom of the notebook. 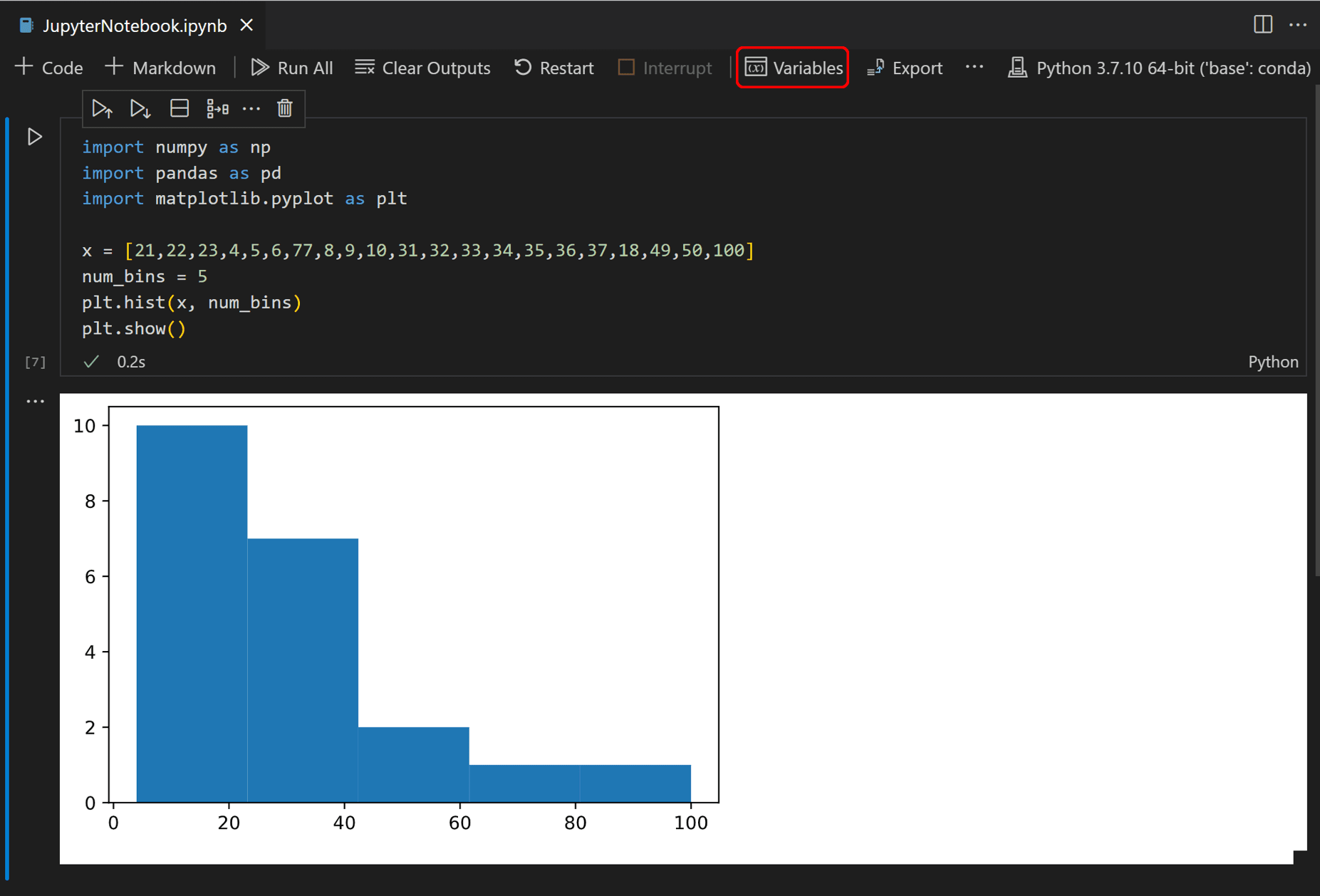 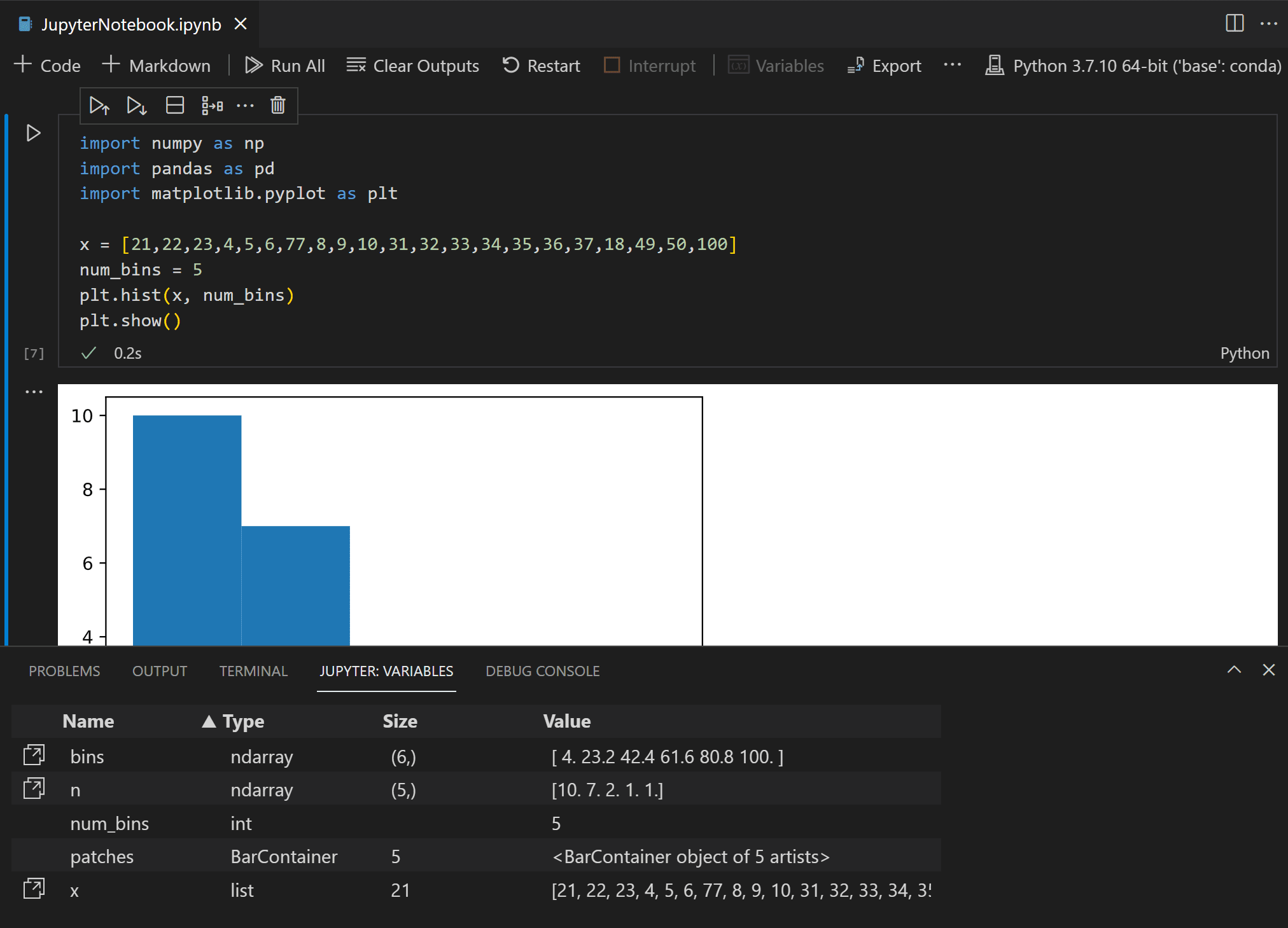 For additional information about your variables, you can also double-click on a row or use the Show variable in data viewer button next to the variable for a more detailed view of a variable in the Data Viewer. Once open, you can filter the values by searching over the rows.

To save a plot from your notebook, simply hover over the output and select the Save icon in the top right. 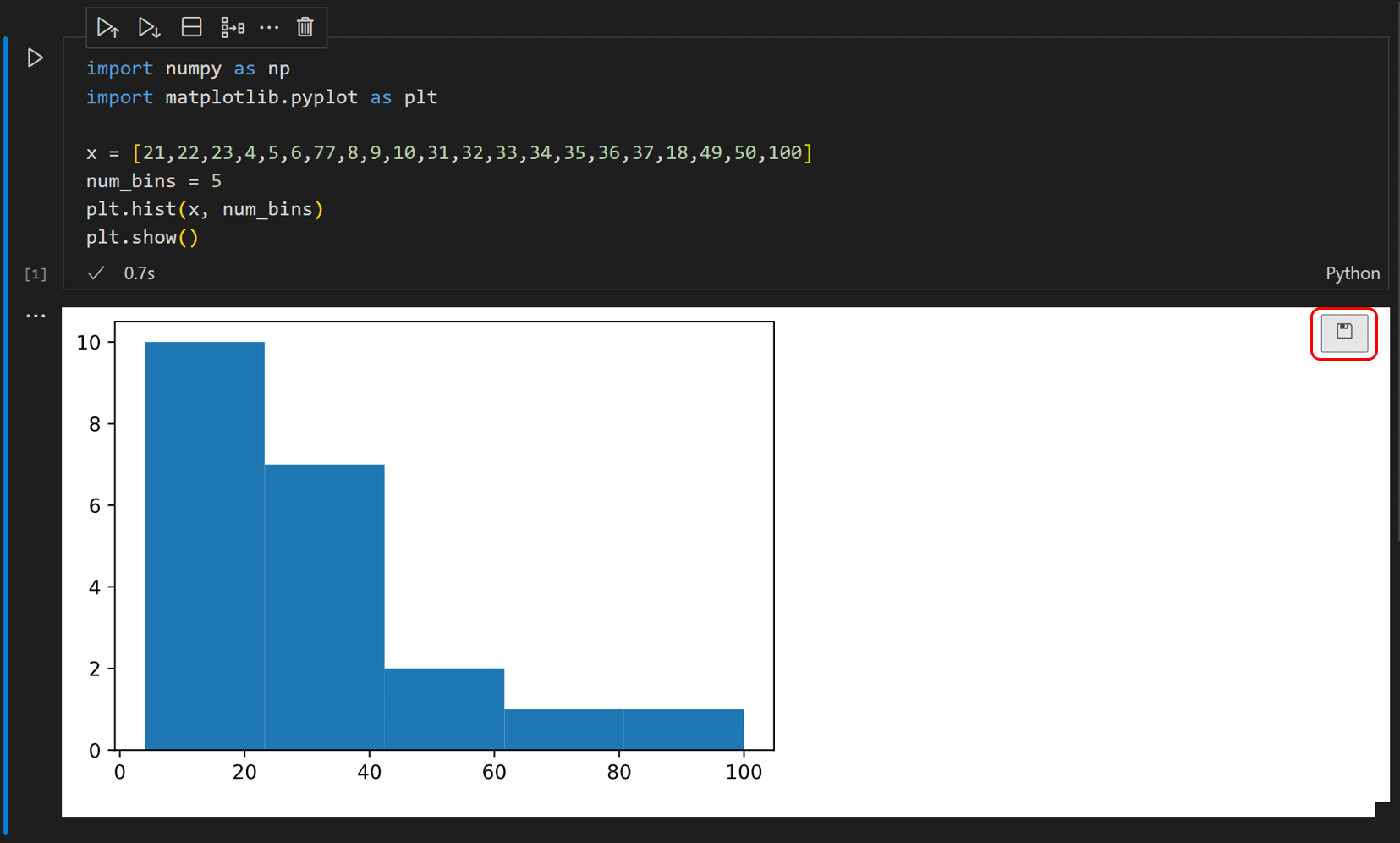 Note: There is support for rendering plots created with matplotlib and Altair.

Under the hood, Jupyter Notebooks are JSON files. The segments in a JSON file are rendered as cells that are comprised of three components: input, output, and metadata. Comparing changes made in a notebook using lined-based diffing is difficult and hard to parse. The rich diffing editor for notebooks allows you to easily see changes for each component of a cell.

You can even customize what types of changes you want displayed within your diffing view. In the top right, select the overflow menu item in the toolbar to customize what cell components you want included. Input differences will always be shown. 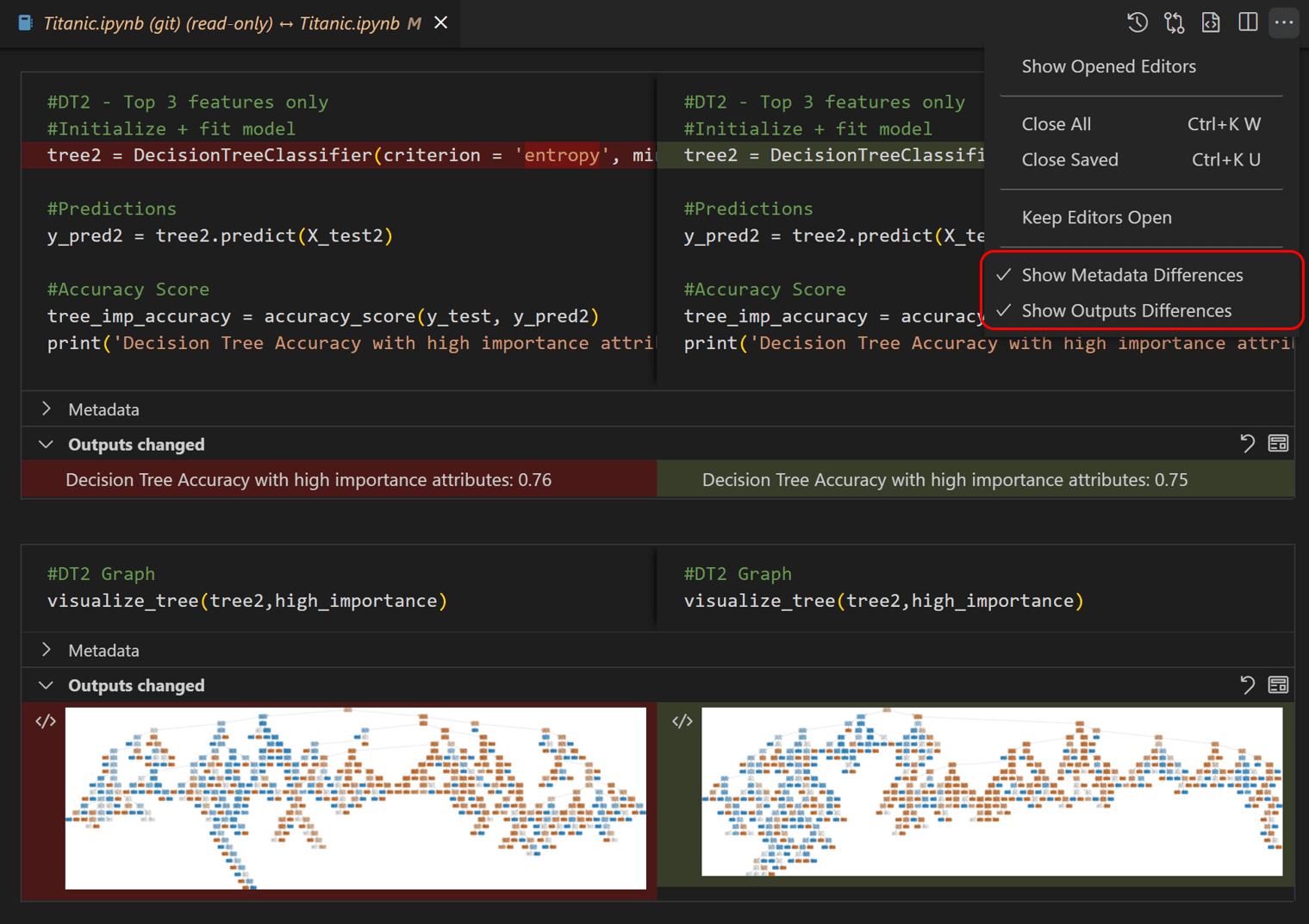 To learn more about Git integration within VS Code, visit Version Control in VS Code.

If you need additional debug support in order to diagnose an issue in your code cells, you can export it as a Python file. Once exported as a Python file, the VS Code debugger lets you step through your code, set breakpoints, examine state, and analyze problems. Using the debugger is a helpful way to find and correct issues in notebook code. To debug your Python file:

Connect to a remote Jupyter server

You can offload intensive computation in a Jupyter Notebook to other computers by connecting to a remote Jupyter server. Once connected, code cells run on the remote server rather than the local computer.

To connect to a remote Jupyter server: